Superman’s big moment approaches! Action Comics #1000 releases tomorrow – a monumental benchmark for all of superhero comics, being the first monthly comic to hit that lofty number from the Big Two. It’s going to be as massive a celebration as comic books can get, with many stores holding midnight release parties and more than your usual amount of variants to mark the occasion and drain your wallets.

A few weeks ago, I wrote an article recommending some Superman stories that didn’t actually feature the Man of Steel, but homages that hit pretty close to the mark. I have never been a great Superman fan. In fact, after my first couple of years as a comic book reader, I graduated to Marvel Comics pretty quickly. 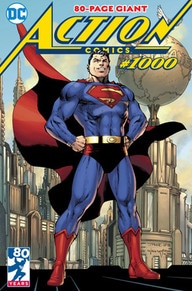 Like many readers of a certain age, I dipped my toe into Superman around the Death of Superman mega-event. That event sucked a lot of the oxygen out of the proverbial comic book room for many months. It was unavoidable! Everyone had to read it if you wanted to stay in the social (read: nerd) loop. Alas, I kind of hated it, so I never really went deeper into the whole Superman thing.

It wasn’t until about fifteen years ago that I actually forced myself to strap in for a nerdy plunge into Superman to see if I could obtain a better understanding of the character. Many of the stories I read were fine enough, but those that stuck out for me place Superman in some fairly unusual positions, twisting and contorting the God-like Superman into something else entirely. I could easily recommend all of the classics out there:

But what fun is that? The internet is littered with recommendations for those books!

Instead, here are some recommendations for some Superman reading to explore in your post-Action Comics #1000 nostalgia-fueled freetime that you won’t find recommended in a thousand other places. 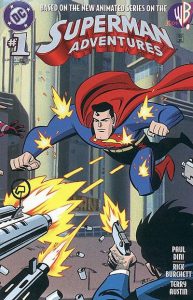 Based on the animated series from the mid-to-late 1990s, this Superman Adventures is for those looking for a more traditional, yet fun, take on Superman. While the cartoon hoped to catch lightning in a bottle like its predecessor Batman: The Animated Series did, Superman: The Animated Series is not nearly as beloved by fans. I will let the cartoon aficionados argue about that, but the comic book series that was based on the cartoon is fine reading.

Like the show, Superman Adventures features a more down to earth Superman who is not as invincible as he is in almost every other Superman story out in the wild. Superman isn’t as cocksure or god-like here, and even seems as frail and fallible as the rest of us mortals at times. The Superman from Superman Adventures is a more compassionate and real Superman without ever falling into the, “Hey, let’s make Superman edgy!” shtick. Dare I say that Superman, the ultimate alien hero, is actually relatable to the reader? Maybe!

The stories are fun, light, and entertaining without ever reading like corny adventures from the Silver Age. Featuring the creative talents of Mark Millar, Scott Mcleod, Paul Dini, Devin Grayson, and Ty Templeton, Superman Adventures is a perfect introductory romp for anyone looking to check out Superman for the first time. It’s my go-to recommendation for Superman neophytes! Three volumes have been collected over the last couple of years too, with more on the way. 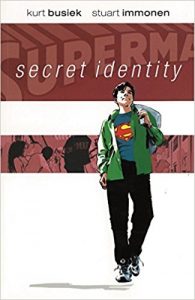 Kurt Busiek is one of my all-time favorite writers. There has been very little of his work that I haven’t at least enjoyed or entertained by. Having the always impressive Stuart Immonen along on art duties also doesn’t hurt this story either. It’s one of those pesky (well, to some readers, not me) Elseworlds stories, which take place in alternate universes and present heavily changed backgrounds for classic DC characters. The imagined set up for this story is quite impressive.

The world of Secret Identity is mundane, and like our own world, Superman is a character of fiction. The story follows a young man whose small farm town parents name him Clark. The problem? Their last name is Kent, which leads to endless Superman dad-joke comparisons/shenanigans with nearly everyone poor Clark Kent encounters throughout his entire life. People always give him Superman memorabilia and poke fun of his name. Clark thinks it’s a burden until he actually starts to develop the powers of Superman.

The four issue miniseries follows Clark’s life as he becomes the Man of Steel for real, struggles with this new identity, and eventually how he learns to juggle the responsibilities of becoming the greatest heroes of fiction. Superman: Secret Identity is at its heart a book about growth and family. Other Superman Elseworld stories like Red Son and The Nail may grab more accolades, but Secret Identity is the crown jewel as far as I am concerned. The story can be found in single issue or a in trade format. 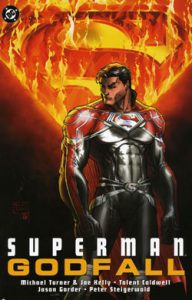 Reading like an Elseworlds title itself, the six issues of Godfall present an interesting take on one of the more cheesy elements of Superman’s canon, the… Well, I can’t say. To say anything about this particular arc might spoil the fun of discovery.

Without giving too much away, this story finds Kal El as a middling bureaucrat on Krypton. He’s married to a beautiful offworlder named Lyla. Despite living a moderately satisfying life, Kal El feels as if something is very off. He keeps getting flashes of another life beyond what he is experiencing now. When terrorists target him for assassination, events start to unravel as Kal El finds out that he may be more super than he realizes.

To say anything more would spoil the fun! Written by Michael Turner and Joe Kelly, and featuring art from Talent Caldwell, this beautiful six-issue story arc is an under the radar classic that puts Superman in a very unusual set of circumstances. Godfall can be found in trade or individually in Action Comics #812-813, Adventures of Superman #625-626, and Superman #202-203. 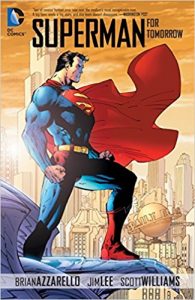 For Tomorrow features the blockbuster creative talents of writer Brian Azzarello and artist Jim Lee. Do you really need more of a recommendation than that? I know the names on the front cover are what initially pulled me into this book! I figured that even if I didn’t like the story, it would be great to look at for the art! Fortunately, both art and story were great.

Published originally in Superman #204-215 (right after the Godfall arc from above), the best way to describe For Tomorrow is to say that it is like placing Superman into Tom Perrotta’s excellent novel The Leftovers (which spawned the HBO show of the same name). One million people disappeared from Earth a year ago, including Superman’s wife Lois Lane. For Tomorrow finds Superman retracing the last year as he investigates the mass disappearance, in search of who perpetrated such a crime.

Spoiler alert: the answers are not going to please anyone, least of all Superman. Featuring cameos of all your favorite DC heroes, For Tomorrow puts Superman in some interesting moral quandaries that grapple with loss, religion, and politics. “With great power comes great responsibility” might be an apt subtitle for this arc if it weren’t already so synonymous with a character from the distinguished competition. For Tomorrow is another Superman story that puts the usual conventions on their head in interesting and thought provoking ways. Like all of my other recommendations, this story can be found in trade or individual issues.