In 1992 I was five years old; too young to be relegated to the outdoors unsupervised for long periods of time, and yet too old to be contained by a playpen of any kind. So my parents were quite content to set the television to STUN on Saturday mornings with the now defunct Saturday morning block of cartoons.

My rock, my compass, possibly the first stone laid in what would later prove to be my nerdy foundation was Teenage Mutant Ninja Turtles. Heck, I even remember eating the trademarked cereal out of the concave face of Leonardo (which had a nifty straw built right into the side so you could enjoy the resulting sweetened milk without a mess).

But 1992 brought with it another favorite cartoon of my childhood. To this day, as the theme plays I can accurately describe to you exactly what images accompanied the music.  It all starts with the WB (Warner Brothers) logo morphing into a police dirigible and ends with the Caped Crusader, the Dark Knight, the World’s Greatest Detective, dramatically illumined by a bolt of lightning before returning to a blackened silhouette with naught but his glowing white eyes showing through the darkness of Gotham City.

Back in 1992, I was the perfect age to appreciate much of what Batman: The Animated Series had to offer.  But on this side of 30, Glen Weldon’s The Caped Crusade: Batman and the Rise of Nerd Culture, and revisiting the series in its entirety thanks to Amazon Prime Video, I’ve also come to realize how much more there is to love about the series as an adult.

Batman: TAS Was Not (Just) A Kid’s Show

It aired primarily during kid-friendly blocks alongside other kid- 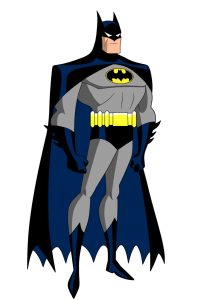 friendly programming, but those truths belie its appeal.  Listen: I love the Ninja Turtles, but upon attempting to return to the classic cartoon episodes as an adult I found myself, well…largely unamused. Everything is childish! Perfect for 5-10 year old Earth Nerd Adkins. Not so much 30 year old me.

Batman, on the other hand, makes my lunch hour feel exasperatingly short even though I can (just barely) squeeze three entire episodes in while I cook and eat. There’s something magical about this.

It is cunningly dark; showing just enough for adults to see in the show a maturity without causing discerning parents to change the channel. For instance: In the episode “Robin’s Reckoning Part 1,” the ropes of Dick Grayson’s (Robin) parents are shown to fray and the circus act’s audience reacts to something clearly upsetting, but whereas the Drakes’ silhouettes are shown sailing through the air on the trapeze, they are not shown falling from them. Heck, the frayed rope isn’t even shown actively snapping.  It swings out of sight bearing the Drakes and returns to the screen empty and broken.

And this is just one example of many.

And while the Ninja Turtles were dealing with the bumbling antics of what are in hindsight remarkably inept villains, Batman was set against villains with real cunning, threat, and ability. Not to mention the adult themes that explored alleys much deeper and darker than “good guy vs bad guy.”

I’m not alone in my grownup adoration of Batman: TAS. The show won four Emmys:

Glen Weldon’s concluding remarks on Batman: TAS are as follows:

…Batman: The Animated Series remains a beautiful anomaly, a perfect narrative paradox forever hovering in two simultaneous but mutually impossible states: it is at once the most fan-focused and nerdy, and the most accessible and normal, depiction of the Dark Knight that will ever exist in any medium ever.

With all the (totally deserved) hype surrounding such Batman offerings as The Dark Knight Returns (Frank Miller’s gritty comic), The Dark Knight (easily the best Nolan Batman movie, thanks in no small part to Heath Ledger’s take on The Joker), and the Arkham video games titles, don’t let Batman: The Animated Series slip past you or your children.

Watch them as-is and for pure enjoyment and introduction with your kids!

Rewatch them on your own initiative to discover that time has not diminished it at all, but may well have enhanced it significantly.

Or you can even do as I’m doing and follow along with Steven Padnick’s episode by episode analysis on Tor.com from 2012. I’m not sure yet if he covers them all, or if the project was abandoned, or if he included analyses of episodes of New Batman/Superman Adventures in his series (those episodes are included in Weldon’s 110 episode numbering). But they are interesting enough to take advantage of while they last!

So what are your memories of Batman: The Animated Series? What kind of canonical place does it hold in your heart?

For me: It is the Bat-signal itself; a shining beacon to which I’m returning to know Batman as Batman ought to be.

The Life of Sir Walter Ralegh, the Story of England’s True Life Bard