2018 finds Superman at an important juncture in his storied career. On April 18, Action Comics #1000 is set to hit the comic stands. As big as an accomplishment as that is, there’s also the advent of the Brian Michael Bendis era. Bendis’s first story is to be published in Action Comics #1000, followed by a miniseries, and a general takeover of the two main titles with (you guessed it) brand new first issues. Recent DC comics have featured a full-blown two-page ad announcing the coming of the Bendis era! It’s a pretty big deal to DC! The Man of Steel stands to receive a shining moment in the comic book spotlight over the next few months.

So it’s a great time to read up on some Superman books, right? Well, maybe. Or maybe not. I have a confession to make: a vast majority of Superman stories are kind of bland. Don’t get me wrong, there are a ton of great stories out there! Ask, and nearly any fan worth their weight in kryptonite will give you a pretty comprehensive list.

For my reading pleasure, I have always liked Superman stories that don’t necessarily include Superman. It won’t surprise anyone to find out that Superman has inspired imitation for decades. Copycats or homage, many of the Superman clones have produced some excellent stories. Here are a few that I have enjoyed over the years to give yourself a fresh perspective on America’s superhero that don’t actually feature him outright.

Readers really can’t go wrong with Alan Moore. His excellent Whatever Happened to the Man of Tomorrow? stands as one of the best Superman stories of all-time. One would suppose that there would be more Superman books by the bearded eldritch god of comic book writing, but there really isn’t much out there, save Superman Annual #11 and DC Comics Presents #85. 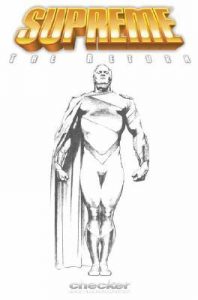 That is unless you count his time on Supreme. Moore lovingly writes a beautiful homage to the Silver Age Man of Steel using Rob Liefeld’s Image/Maximum hero. Supreme was obviously a Superman pastiche from the get-go, but Moore manages to strip away any facade disputing the fact, as he writes an out-and-out Superman story. It follows penciler Ethan Crane, who has been hired along with superstar Dazzle Comics writer Diana Dane to write a new Omniman comic (himself a Superman homage). Of course, Crane has a lot of experience to work on such a comic since he’s really Supreme! Moore even manages to explore the constant reboots of Superman throughout the years by baking it into the story itself.

Supreme features all of the Silver Age goodness one can find in nearly every Superman comic of the period, with the typical skewed results an Alan Moore comic brings to the table. The entire twenty-two issue run is collected in two volumes, Supreme: The Story of the Year and Supreme: The Return.

Most comic book fans don’t even realize (or perhaps have blessedly forgotten) that Alan Moore took over Jim Lee’s WildC.A.T.s in the mid-to-late 1990s. The results are mixed, and that’s being charitable at best. Most of his run on WildC.A.T.s is criminally bland, but there are a few spotlights across his run and the various one-shots and miniseries he produced. 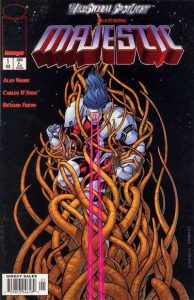 Wildstorm Spotlight #1 is one of those rare expectations. This time more tackles the Superman clone Mr. Majestic (or sometimes just Majestic). While the character first appeared in WildC.A.T.s #11, Moore made him a central character and team leader during his run on the title. Not content to be just another Superman clone, Majestic was more aggressive and unafraid of unleashing the full force of his power. Technically, Majestic is about as boring as Superman pastiches come, Moore did something interesting with the Superman character: he brought him to the end of time!

In Wildstorm Spotlight #1, readers find Majestic witnessing a dying universe at the end of time. Having outlived nearly everything else except a select few aspects of the universe, Majestic finds himself literally being consumed by the end of everything. And also having some pretty weird “end of the universe” sex too. Hey, it’s an Alan Moore comic.

Moore’s “last” Superman Majestic story works rather well as a Superman story as it is a rather heady exploration of the end of time, with all things, including the strongest hero ever, getting consumed by the oncoming darkness. The story can be found in single issue or in the Alan Moore: Wild Worlds collection.

After finishing their brilliant Marvel Knights Inhumans miniseries, the creative team of Paul Jenkins and Jae Lee brough The Sentry (back?) into the Marvel Universe in 2000. Though the character is maligned in some circles today, I have always loved The Sentry’s original miniseries and the accompanying one-shots from Jenkins and Lee. 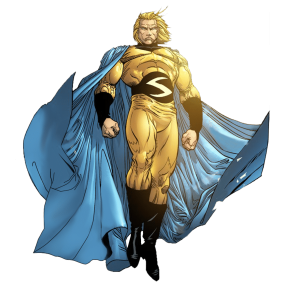 The Sentry is Robert Reynolds, a flunky superhero who has kind of let himself go. However, the return of his arch-nemesis the Void springs him back into action. The Macguffin backstory for the Sentry was that he was an old Marvel Comics character that everyone, readers and Marvel Universe denizens alike, had forgotten. With the power of a million exploding suns, the Sentry quickly became one of Marvel’s first celebrated new heroes in the 21st century.

If you haven’t checked it out, I won’t spoil the twist for you. The character fell into disrepair in his later years, but that first series was a blast to read, especially the fun one-shots exploring his “forgotten” past with Marvel mainstays like the Fantastic Four, X-Men, and Spider-Man. This first run can be found in The Sentry volume 1 collection. The Sentry also has a new miniseries coming from Marvel by the always excellent Jeff Lemire. Be on the lookout for that!

Marvel’s Squadron Supreme has always been a fun take on the DC superheroes with a Marvel spin. In 2003, writer J. Michael Straczynski and artist Gary Frank brought an even darker version of the Justice League to Marvel’s adults-only Max imprint. 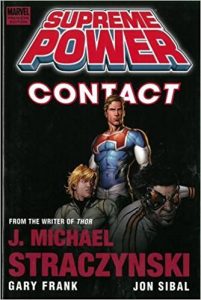 Led by Hyperion, the Superman-like alien from another planet, the Squadron Supreme took everything from government plots to the Darfur situation in Sudan. At least in its initial gory run, Hyperion played the perfect aloof alien who had been raised in isolation by the U.S. government, taken away from the quaint Midwestern farming couple who initially found him. As the series progressed, Hyperion increasingly questioned his role in doing the bidding of a corrupt and secretive government. Hyperion eventually becomes the anti-establishment nihilist that Superman could never evolve into because of underwear and pajama sales.

But all good things can’t last forever. Delays and reboot of the title left the world weary heroes languishing in limbo after a seven-issue second series fizzled and dissolved without resolution.  A couple of abortive attempts to reignite the magic of the Straczynski and Frank series were attempted, including a crossover fight with the Ultimate Universe, but the patient was already dead.

Don’t let that fact lessen your enthusiasm for checking out this book! Supreme Power tells the story of a Superman who has been changed by the government that raised him and of a world that is altered by his very presence. It’s a killer story that Marvel should consider revisiting even after all of this time period. The original run was collected in variety of trades, but curious fans should definitely check out the first two collected volumes, Contact and Powers & Principalities, to read a very modern take on the Superman mythos.

Store Your Brains in a Tea Kettle

7 Alan Moore Stories Worth Reading (Outside of the Usual…