About a month ago, I interviewed game designer Chris Bryan about his upcoming game Dragon Ball Z: Perfect Cell Dice Game.  What Chris didn’t know was that I’d been barking up IDW Games’s tree about this game since it was announced back in November of last year.

Its not my custom to ask for specific games from developers for review.  That feels far too selfish.  But in the case of this game, I all but pretty-please-with-a-cherry-on-top’d their Marketing and Events Director (who has been awesome in response) because Dragon Ball Z has been a love of mine since, like, forever (See?  Its even making me revert to the speech mannerisms of my youthful days when DBZ became a staple of my life).

So no sooner had it landed at my doorstep than did I round up three friends to take on the roles of Z Fighters in the iconic battle against Perfect Cell.

The Thematic Elements are Over 9000!

Anyway, the aesthetics of every aspect of this game screams DBZ.  Senzu beans as HP tokens, Scouters as Cell’s various threats, even the faces of the dice depicting symbols like a hand grasping a Dragon Ball, two hands reminiscent of the position taken up by Goku before a Kamehameha, and even the Assist symbol which reminded me of open hands stretched towards the sky across the world when the Spirit Bomb is being prepared.

All of the elements feature officially licensed art of the characters and the names of powers and abilities lifted straight out of the canon of the show like Piccolo’s Light Grenade, Gohan’s Masenko, and Krillin’s Destucto Disc – just to name a few.

There is much to the visual elements of this game to be loved by the fanbase that is its target market.  The only possible oddity is the Gohan art on his character card.  It is just a bit dated for the Cell fight, is all.  It is definitely pre-Hyperbolic Time Chamber Gohan, but I’m 100% confident Chris knows this (he worked for Funimation on Kai) and so I chalk it up to something on the licensing end.

Perfect Cell is a co-op dice game that pits the players against the board.  Players will first select which of the Z-Fighters they’d like to play:

Each has a unique character ability.  Vegeta’s ability curiously allows him to begin with the Kamehameha Power Up, but the rest are sensible and varied.

When players are set, you reveal a number of Threat Tiles equal to the number of players and play begins!  Players take turns rolling their set of dice and using them to: 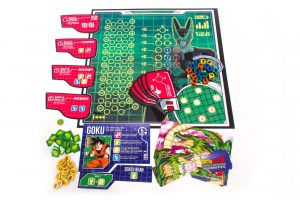 Play continues until one of three things happens:

There are also 3 difficulties of play:

Less Threat Tiles = less time to reduce Cell to 0HP – the only win condition for the Z-Fighters!

Perfect Cell is very easy to pick up and play.  I’ve played it by myself (1 player) and with 3 friends (4 player), and in both cases it took less than 30 minutes to bring the android down.  Solo play mixes things up quite a bit.  Piccolo and Gohan’s character abilities made solo play a breeze while the others had me avoiding the Galick Blazer Power Up like the plague (it forces you to treat Attack symbols as Supers, and that severely limits your ability to disable Cell’s Threat cards) and place a whole lot more value on the Mimicry Power Up which allows for extra dice rerolls.  And Goku is literally the worst playing solo! 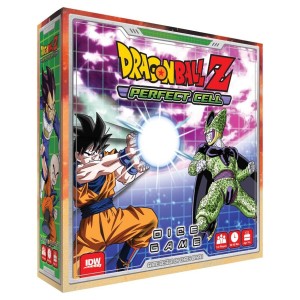 We tried Impossible Mode as a group and managed to pull it off.  Time seemed to be our biggest threat, not the damage Cell was meting out.  I think we lost a total of 3 damage across the two games we played, but we did just manage to eek out the win the Turn before we’d have lost due to a lack of Threat Tiles!  I bested it with all characters solo, too, but it came down to the wire with everyone but Piccolo, Gohan, and Krillin; and sometimes just due to the luck of the dice!

We do wish there was a greater diversity when it comes to the Power Ups.  What you have are 2 each of 9 Power Ups, so there just isn’t a ton of variety.  18 different Power Ups would bring much greater flexibility and customizability to builds with each character.  As it is, we discovered quickly that Galick Blazer + Super Saiyan + Super Kamehameha on any character quickly spells doom for Cell.  That’s the winning build easily.  And it is easy to acquire since the odds each will show up in your Power Up pool are high.  But when you’re playing solo, that combo isn’t always the best strategy, so there is that.

There are also a couple of mechanics that we just never bothered with or had to utilize.  For instance:  We never placed a di on the Dragon Radar.  We never needed a revive, plus there are plenty of ways apart from the Dragon Radar for characters to heal up if necessary.  One fewer way to heal for HP would have upped the ante a bit.  And none of us ever left dice sitting on a Threat Tile from one Round to the next (I did do this playing solo, though).  However, when the situation arises wherein we’ll need to do so, they are both well thought out mechanically.  They’re costly in their own unique ways, but also have obvious value in certain circumstances.

Is It Worth the Zeni?

Perfect Cell isn’t a hard game, but gosh darn it I do enjoy playing it!  The fact that I can play by myself is a fun bonus.  And when I do…I may or may not do impressions of the character I’m playing, shout the names of the moves I’m using, and have tracks from the anime playing in the background.

Its not the best game ever and I really do wish there was a lot more diversity with the Power Ups, but it is easy to set up, quick to play, and fun for a fan of the manga or anime.

You can snag yourself a copy from IDW Games here!