Have you ever been in the middle of playing a game and thought or exclaimed aloud,“Who comes up with this stuff?!”

Well, I have!  So I’ve reached out to several game designers to net some interviews to give you a privileged peek behind the game design curtain.  This time we’ll be talking with designer Chris Bryan (also of Board with Life fame) about the Perfect Cell Dice Game from IDW Games.

Players will control one of half a dozen iconic Z-Fighters to stop the menacing Perfect Cell.  They’ll roll dice to power up their characters and take the fight to Dr. Gero’s ultimate creation who was sent back in time to bring an end to Goku and his friends!

NOE:  Before we get into anything related to the Perfect Cell game of your design, we’d like a chance to get to know you some!  So what’s your nerd origin story?  What nerdy stuff did you cut your teeth on and how did they lead you to this place of game designing? 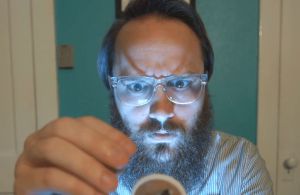 CB:  I was always into geeky things growing up, mainly board games and anime, which obviously played a large part in where I ended up. When I was 12 or 13 I saw Dragon Ball Z for the first time and joined my school’s anime club shortly thereafter. I quickly fell in love with anime, eventually that love expanded into foreign film and then independent cinema.

I wound up going to college and majoring in film, hoping to become a filmmaker. All the while I was playing tabletop games, never realizing that someone obviously had to be designing them. It didn’t occur to me to try my hand at designing games until much later in life.

NOE:  As a kid-….aw, who am I kidding?  Even still today, I love the Dragon Ball franchise immensely.  It is without a doubt what put the upcoming Perfect Cell game on my dragon radar.  Did you have a history with the franchise before getting to work on this game?

CB:  Strangely enough, I did. As I mentioned I was a big fan of DBZ growing up and I majored in film. Once I graduated, my first industry job was working for FUNimation on Dragon Ball Z. It was when they started releasing DBZ Kai, and I was the guy painting out the blood so they could put it on TV for kids, haha!

It’s incredibly ironic because I remember I was furious that they edited the original show when I was 13 and I wound up literally being the guy doing that very thing. Eventually I worked on doing frame by frame remastering of DBZ for the blu ray release. Going back to the original 16mm negatives and cleaning them up frame by frame for the next generation of fans was a really awesome experience.

NOE:  I had no idea you had ties to FUNimation!  That’s awesome!  That makes you perfectly qualified to answer my next question, too.

Frieza is certainly a more iconic villain than Cell, and the fight with Perfect Cell excluded most of the heroes featured in the game.  So how did it come to be that Cell was chosen as the villain?

CB:  I’m not sure what the reasoning was behind the scenes, but IDW asked that I base the game around Perfect Cell. I’m really excited with how the game turned out and agree that Frieza would be an awesome villain/saga to explore. Hopefully the game does well and IDW asks me to design some more games for them.

NOE:  A behind the curtain kinda question:  Who decides on the type of game that you’ll produce (dice versus cards, for example)?  Your work with Board with Life exposes you to a ton of games with similar mechanics (dice).  Were there any in particular whose spirit you channeled while designing Perfect Cell?

CB:  IDW acquired the license for dice and tile games from Toei, and they asked that I design a dice game for them, but beyond that the type of game was up to me. I tried to approach the design thematically, looking at how DBZ felt and trying to create moments that felt like you were a Z Fighter taking on Cell. I liked how the dice were used in Pandemic: The Cure, so I’m sure some of that game subconsciously informed some of my design decisions.

NOE:  And how do you think the dice mechanics in Perfect Cell help evoke a sense of the combat integral to and definitive of the anime? 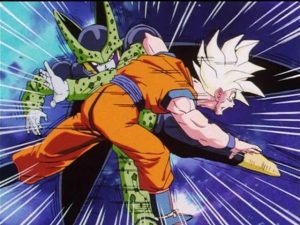 CB:  I had a few major directions I wanted to take the design. Specifically, I wanted it to feel overwhelming at first but for the characters to slowly grow more powerful. I also wanted to highlight teamwork amongst the Z-Fighters. The fact the things the dice can do start out pretty weak but can be upgraded by acquiring new powers throughout the game really helps to create the feeling of powering up.

I’m also really proud of how the game incentivizes teamwork. You can share dice, so often times loaning some of your dice to another player so they can have a huge turn rolling a handful of dice is smart. The way Cell takes damage also incentivizes planning your attacks so that everyone gangs up all at once.

NOE:  I’ve been looking forward to playing this game since it was first announced, and that excitement has only built during this interview.  But we’re not here to talk about my desire to play the game (that’ll get covered in our review!).  What was your favorite part of the design process for this game? 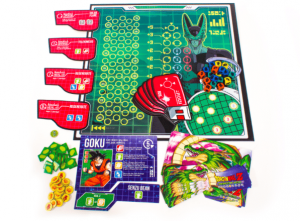 CB:  It was an awesome learning experience for me. I had never designed a game theme first, a dice based game, or a cooperative game, so I really enjoyed getting to stretch my design muscles and approach the design from a different point of view.

As for specific moment:  the first playtest when the balance started getting close. We were down to our last few turns but were close to beating Cell. Everyone was cheering for each other and really getting in to role playing our characters. It’s always awesome to see people who love DBZ getting excited about getting to embody the different roles.

NOE:  I already mentioned Board with Life.  Where else can readers find you and your work on the internet?

CB:  People can visit my website, ChrisBryanGames.com, and follow me on Twitter @ChrisBryanGames to stay up to date with my weekly board game news videos and my game designs.

NOE:  And lastly, what are you nerding out on right now, Chris?

Looking forward to Westworld, Legion, Game of Thrones, and Atlanta. 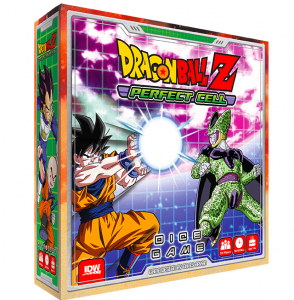 Dragon Ball Z: Perfect Cell releases in early March.  Fans of the Dragon Ball franchise will undoubtedly find much to love in the game’s scenario and the strong thematic elements ranging from licensed art to scouter-shaped cards.

Chris brought a fan’s eye to both the aesthetics and the mechanics of the game.  Sounds like he was the perfect choice to bring Dragon Ball to your tabletop with IDW Games!