How will your SFS crew handle a kidnapping case with a gruesome reveal?

By Jason Sansbury On May 11, 2018 Last updated Sep 3, 2018
Share TwitterReddItPinterestFacebookEmailPrint

In our semi-regular Starfinder game, I serve as the DM and I put together some homebrew adventures. The basic set-up of our larger narrative is that the group is the crew of a ship when their captain disappears, so they have to go around chasing jobs to keep things running, hoping to eventually find their beloved Captain Dre. That let’s me as a DM pitch out three choices for them to pick as their next gig and we go from there.

Recently, they chose this adventure and I wanted to share it with you all. So if you are not a DM and you think there is a chance your group may run this, spoilers ahead!

This piece is roleplay heavy as the crew finds a job posted by the high-elf Laredo, who runs a business taking very wealthy travelers to the planet Apostae to visit the ruins on that planet of the former civilization that lived there, the Ilee. Business has been very good until recently when some of the tours were sunk into darkness and everyone falls asleep only to later awaken with their valuables stolen.

The most recent endeavor even turned more troublesome as four passengers were kidnapped; each being a female of their species or of a species that has multiple genders.

This scenario lets PCs really dig into a little bit of Starfinder lore. I chose Apostae on purpose, especially 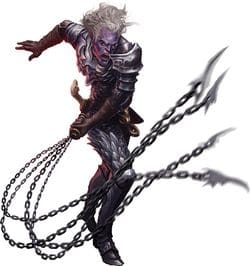 with its history as a planet whose native species, the Ilee, seem to have died out. That this civilization lived beneath the surface let me make it even more creepy. Also, by setting it here, it let me have a rather routine starting villain: a group of Drow thugs.

Laredo is the business owner and his motivation is that he does not want to have his business interrupted, as these tours are very lucrative. He is bothered more by the recent kidnappings and is willing to pay well if the group will help him figure out who is raiding him and why.

You want to focus on these key details:

The prisoners being taken escalates the issue and puts a bit of a clock on trying to find out what happened to them.  You will want to figure out the race of each of the captives beforehand. Again, I used this as a way to introduce and educate my characters to some of the races in Starfinder. I settled on a Maraquoi, a Sarcesian, a Wytchwyrd and a human. These species choices will come into play later.

Once the players take the job, they are loaded onto the ship disguised as passengers. The captain is Ramon, who seems very loyal to Laredo, and he has three other staff on board this small ship with him, including two female servers, Andrea and Lydia. The players will get to board first which will give them some time to figure out a plan. If they don’t stumble into themselves, a female PC or someone posing as a female gendered character should be used as bait.

Upgrade Your Campaigns with Epic Encounters from Steamforged…

Populating the Setting with NPCs

I went big with Ramon. He is a mixture of salesman, tour guide and street hustler. He basically knows nothing but acts as though he has been given deep secrets into the understanding of the Ilee. That said, the robberies didn’t spook him bad until the recent kidnappings. He seems very disturbed by them in particular…

…in part because he is in a relationship with Lydia, and Ramon is worried she may be a kidnapping victim. The relationship is against the owners rules, however, so they have kept it on the downlow.

Ramon says that they can’t have big shows of flashy weapons. So, anything larger than a pistol has to be stowed away in a locked safe on the ship. (I used this mainly to worry my players. They got very nervous when they had to put away with there laser rifles…)

Build yourself a list of NPCs that will board. I held it to a dozen and made some groups. My list included: 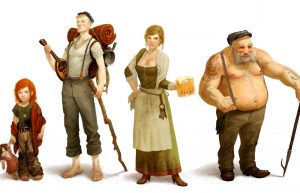 From the start, I wanted to let my PCs know that two things were involved in the heists: darkness and sleep. This information let them formulate some plans and ideas of attacks when the time came. And it allowed me to build tension as soon as the darkness hit.

This scenario all depends on some saves and the tools the drow are using to attack.

First, the drow have a ring of deep slumber, with a DC 20 WIll Save or characters go unconscious. This DC is high on purpose as I wanted to knock out all the NPCs and potentially a PC or two. When we played the scenario, 3 out of 4 passed it, with the bait character (a human male posing as a female) failing his save.

Second, the darkness is a drow ability. So, with these lower level PCs not having access to some means to see through the darkness it makes this scenario interesting in that it could go a couple ways:

With either a way they devised or through the love rings of Ramon and Lydia, the characters are able to track down the robbers to a warehouse.  And that is where Part 2 of this adventure will pick up. You’ll not want to miss the twist at the end of this investigation!