Whether you have a fancy table with a built in television, a game on Roll20 or Fantasy Grounds, or just a friendly local game around a coffee table, unless your group works strictly in theater of the mind, at some point, as a GM, you will want a map. (While there are many sides on the maps and miniatures versus the theater of the mind approach, for today’s piece, I am going to assume that you have already made up your mind and want to use maps and miniatures.) So, what are some of the ways that you can source a map? 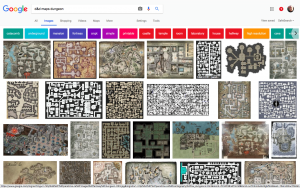 Google Image search. This one seems almost too easy and while it isn’t perfect, it will produce some results if you get the right keywords in your search. In general, I think it is interesting to see what items are out there and maybe help narrow down the search. But, here is the truth: someone spent their time and energy to make that map and you should honor that if you can. Most of the time I use the Google search to find what I want and then figure out how to pay for it. 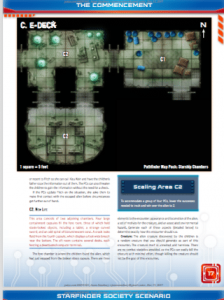 Published adventures. Our current campaign on Starfinder is done entirely on Roll20. And I have found the best source for maps for my homebrew adventures out in the Drift are from the Paizo published products. The Starfinder Society pieces and the current Dead Suns Adventure Path have maps in them. And as a subscriber, I also get the pdf of said maps as a part of the adventure pdfs. So it is fairly easy to take those maps and make them work for what I need. Sometimes the maps inspire me to take it a certain direction but just as much, I need a certain setting and find what works. Likewise, for fantasy settings, there are tons of maps out there in published works that you can take and use as you see fit!

DMSGuild and Drive-Thru RPG. These two sister sites are built on the premise that people can put up things that are somewhat vetted and others can purchase them for a reasonable price. This option is especially good if you want something that is a step above what comes in an Adventurer’s League module. Others have taken those adventure’s and made nice, colorful version of those that can be used in your setting. In my experience, it is generally worth the investment if you have decided to go with miniatures and maps. 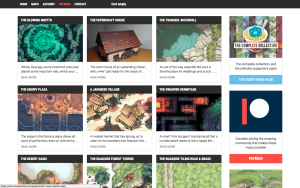 Support creators whose work you like. With the advent of the website Patreon, we have a unique circumstance where gifted creators of all kinds can establish a system of support to help them create. For instance, I realized that I was finding the same creator over and over again in my search for maps whose style I liked. That led me to Ross at 2 Minute Table Top! So, I have chosen to support him to the tune of a $1 per map/thing he creates and through Patreon I can cap it to a certain amount per month, in case he decides to go super prolific one month and knock out an absurd amount of maps. By supporting him, because of how he has things set up, I gained access to his back catalog, which is substantial. Here are a few other creators I found that you may want to consider supporting. (Nearly all of them make their back catalog available to you after you become a supporter.)

So, what about you? If you are doing more than just getting out the old Chessex map with the wet erase markers, how are you sourcing your maps? What works well at your table? Who is a creator that you think we should know more about?  Let us know by dropping in on our RPG-centric Facebook group Character Sheets and posting on the wall for that community to see and benefit from!