In the Nerds on Earth Slack channel the other day, several of us were were joking about claiming ownership of a piece of land in order to declare the sovereignty of our own nation. As with most things us nerds banter about, we were joking. Or were we?

The parcel of land in dispute was a “floating island” in Minnesota, a story which really does need to be read in full. But I’m sum it up quickly for you: a 100 ton stretch of bogland roughly the size of 4 football fields broke free and began floating around North Long Lake in Minnesota, wreaking havoc on resident boat docks.

Now, you may have heard of the term peat moss. Over hundreds or thousands of years, it can accumulate along shorelines, forming shelves. As they grow in size, they extend outward and may grow to become a couple dozen feet thick. And if water levels are high, these shelves can sometimes break free of their root tethers and begin to float freely in the lake. Seriously, read the full story, because its a hoot.

But who owns a floating island? I want one! And I bet you do too, so if we can lay claim to one, let’s do just that. Well, throughout recent history, several enterprising folk have planted their flag in land masses such as floating islands, as well as a number of other such quirky locales that presented a hint of wiggle room in ownership rights.

Once land ownership was declared, the declaration of the sovereignty of nation was typically not far behind. Yes, we are talking about micro-nations and let’s highlight a few of the more notable ones. 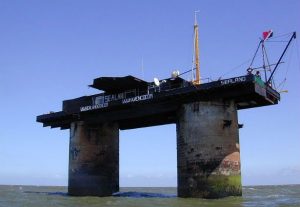 Sealandia In 1942, the British built a two huge Pilars joined by a central platform, then used tug boats to drag them away from their their coast into international waters to intentionally flood them, permanently resting them on a sandbar. Called Fort Roughs, it was part of the Maunsell Sea Forts, a series of strategic naval installations that guard the ports of Britain.

In 1965 the then-abandoned platform was commandeered by Jack Moore and his daughter Jane, squatting there in order to broadcast the pirate radio station Wonderful Radio London. Two years later, Roy Bates, a British subject and fellow pirate radio broadcaster, ejected a competing group broadcasters and declared the independence of Roughs Tower, deeming it the Principality of Sealand. Seriously, read this full expose of Sealandia, as it really is the most pirate(y) thing ever, as its history includes gun fights, high speed boat chases, and illicit passports.

The Principality of Hutt River is a micronation in Australia that boasts 30 full time residents, but over 10,000 overseas citizens. Bickering with the Australian government over wheat tariffs, Leonard Casley declared a roughly 30 sq mile area around the Hutt River in Western Australia as an independent nation in 1970, and declared himself Prince Leonard.

Australia doesn’t legally recognize The Principality of Hutt River of course and Europe describes its official traveling documents as “fantasy passports.” But this doesn’t stop 40,000 tourists a year from visiting, in part because, although it is completely landlocked, Hutt River bestows naval military commissions.

In February 2017 at the age of 91 and after ruling for 45 years, Prince Leonard abdicated the throne, handing it over to his youngest son, Prince Graeme.

Mollossia is a micronation in good ‘ole Nevada of the U.S. of A., although it is not recognised as a country by the United Nations or any major government. It’s currency is valued against cookie dough and it has to be seen to be believed:

I encourage you to grab a cup of coffee and lose yourself in research of micro nations. The stories of many or extremely interesting and several are a hoot. Here is a good assortment of micronation material if you are a reader. If you’d rather watch, the MicroNations Youtube channel is excellent.

If you’ve gotten to this point and think you might just be the type of eccentric, brazen individual necessary to start your own micronation, then you’re not alone. Us Nerds on Earth writers are with you! In fact, we expect to declare the sovereignty of our floating island (EGO, the Shambling Mound) any day now, then immediately begin to mint our our currency that will be in the form of polyhedral dice. You can consider yourself one of our very first subjects.

What do Jawas have to do with the American Flea Market Industry?