Bogged Down: A Starfinder Encounter Idea that Might Save the Planet

By Clave Jones On Oct 24, 2017 Last updated Oct 24, 2017
Scene from the planet Castroval. From "Temple of the Twelve," an adventure for the Starfinder RPG.
Share TwitterReddItPinterestFacebookEmailPrint

A bog is hard to love. They are mucky and barren, and you can’t walk across them without soaking your boots.

But the Earth’s scrubby-looking bogs are among the planet’s most important carbon sinks. They cover only 3 percent of the planet’s land surface, but store 30 percent of its carbon—two times that as all the world’s forests. So when bogs are damaged or drained, they leak massive amounts of carbon into the atmosphere.

I’m talking specifically about peatlands, lowland areas known as blanket bogs that have built up peat moss over hundreds, even thousands, of years. In certain wet, cool climates, when sphagnum moss dies, it decomposes slowly and is transformed into peat. This creates a “blanket” of fresh new growth where the soggy peat accumulates underneath, growing several feet deep in some places.

If the covering blanket of moss is torn, it can damage the bog, allowing it to dry out into black swaths of bare peat. Even a small crack can turn into a gully, leaving the peatland exposed, dry, and dying. In a worst-case scenario, heavy rains can pour through the cracks and puddle, like a blister, deep below.

With the impact of climate change increasing every day, we’re realizing that bogs matter. Places such as Finland (more peat-dense with bogs than any other country in the world) have begun the push to save peatlands.

This is good. Besides their ecological significance, bogs have a rich history as well. In Ireland, peatlands were used to store and preserve huge chunks of perishable butter, something many think could have been offerings to the gods. They also had further religious significance, as they were used to preserve the bodies of people buried thousands of years ago. In some cases, 70,000 years or more ago.

So it’s time to save the bogs. But for peat’s sake, let’s not get bogged down in concerns for our planet’s well being. Us D&D nerds have games to play. Below is a D&D 5e encounter inspired by this ecological tale that you can insert it into practically any campaign for a little bit of flavor.

This encountere is keyed specifically for Starfinder, using creatures from the brand new Alien Archive and settings from Temple of the Twelve, book two of the Dead Suns Adventure Path. But the basic concept works equally well in any swampy or boggy area in D&D or Pathfinder.

Read aloud text: “This region of the Ukulam continent of Castrovel drains to make way for a lowland bog. Protected as a nature preserve, the limited travel to Ukalam has allowed decades of thick moss to form a carpet beneath your feet. As you travel, it feels like you are walking on a waterbed.”

I’m a big fan of including a redshirt to add a sense of shock to stories. It’s a trope and a cheap trick, but it works. In this instance, I imagine a security agent, Ventura, who has joined your party as a short-term NPC as part of the general reconnaissance aspect of the mission. (See book 2 of the Dead Suns Adventure Path: Temple of the Twelve). 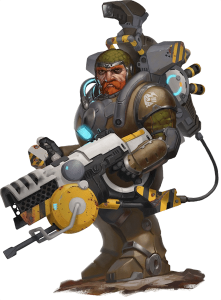 Ventura is a mechanic and is flanked by his flying drone that surveys the bog as it skirts just above the surface. Ventura is a hand full and should be played as such, while also leaving space for his cheeky tongue to ingratiate himself with the party. (I pictured him as the Jesse Ventura character from Predator.)

But as a redshirt, Ventura is meant for a quick doom. The encounter begins as he is violently and suddenly pulled beneath the bog. His body is never recovered.

Honestly, this encounter is not meant to be a fight. While it is expected that the party would spend some actions searching for Ventura, (His drone could scan as well) the idea is merely to shock the players and remind them that roleplaying games can be dangerous.

As the DM, you can create a warning of a second attack, prompting the PCs to run. You can also assure them that their search turns up empty. Finally, Ventura’s now ownerless drone can provide RP opportunities.

In further connecting the encounter to the IRL ecological realities of bogs, the players can later stumble upon a section of the bog that was damaged by the villains and had dried out. Laying dead in the dried out area are the corpses of some Swamp Barracuda, a Pathfinder creature that is easily imagined an a Starfinder creature that could inhabit Castrovel. Even a DC 10 skill check allows the PCs to make the connection that it was likely a Swamp Barracuda that took out Ventura.

It is absolutely worth reading picking up Starfinder and the Alien Archive, if just to let your imagination soar with the new monsters and settings. And consider designing unique encounters around some real life ecology. Sometimes the truth is stranger than fiction.

The Nerds on Earth Podcasts: Sweet Stuff for Your Ear Holes

The Galaxy Exploration Manual: Why I Love Exploring the Galaxy of Starfinder