By Jason Sansbury On May 11, 2018 Last updated Sep 3, 2018
Share TwitterReddItPinterestFacebookEmailPrint

If you missed Part One of this custom Starfinder adventure, be sure to go back and catch up on how the party finds themselves in an isolated warehouse on the surface of Apostae!

Inside, they will discover lots of things in storage and three drow enforcers. When the PCs attack, the drow will fight to the death but as they fall below half their health, you will want to introduce the mutant creatures.

The Big Reveal will take awhile to be shown to the PCs but they are stumbling into a version of Dr. Moreau’s Jurassic Park of Mutant Creatures. The drow had found what they believed to be Ilee DNA and were trying to create new life from it, using the wombs of the kidnap victims. However, the experiments have gone horribly wrong and created these mutant creatures. 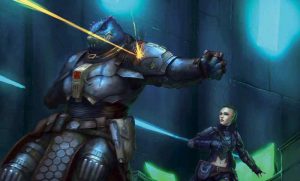 Creature 1: Simian like creature with four tails, each wielding a weapon. Patches of fur and red scale skins. Makes loud screams and seems to be blind (Echo navigation, Maraquoi Mutant). When dies, it explodes into pieces of fur.

Creature 2: Bottom half of the creature is an ooze, sliding across the floor. The upper half is a dark skin creature, with pointed ears and out of its back are 3 red wings. Attack: Throws part of the ooze. +4 to hit, does 1d4 acid damage if it hits (Ooze, Sarcesian mutant). When it dies, it just deconstructs into a giant pile of harmless ooze.

Creature 3: One arm on the left and four on the right – two of which are a deep shade of red. Dark skinned but the eyes glow bright yellow. It hurls magic missiles (Wytchwyrd mutant). When it dies, it ignites in a magic cloud of yellow power that matches its eyes and magic missiles.

I revealed the creatures in the warehouse level and made sure to play the last one introduced as a crippled, scared creature, not a raving monster. All of them are frail. I basically gave them stats to go down in 1 or 2 solid attacks. It gives a chance to share some information with the PCs before it dies from wounds it has sustained. Also, PCs should pick up on the match of these creatures with the kidnap victims, except for the human.

If the PCs do a sweep of the warehouse, you will want to have some treasure items for them but mainly you will want an elevator to ping, revealing more layers of this building down below.

Now, as they get into the Lab below, you can really turn up the horror elements. The basic gist is that the doctors and the lab techs have all been horribly killed. The creature appears to be mauling them, feeding partially and then moving on to its next kill.

For the creature I used the Tome of Beasts Savager for inspiration. I like the dual nature of its claws and quills, especially if it manages to grapple a PC. And I put it far away from the elevator but it can clearly be heard behind several doors.

Elements to reveal in the Lab include: 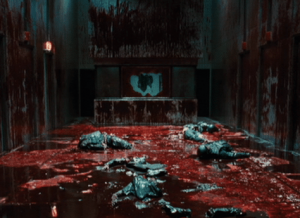 Eventually the PCs do encounter the creature and have to defeat it. Upon doing so, they find that its chest glows red and if they cut it open, they find a fist sized rock that glows red.  If they touch the rock, it blinks. The intention of this idea is that it will increase its flashing rate as it moves towards where it wants to go. If the PCs are too scared to touch it but manage to carry it somehow, it will glow brighter as they move towards the next location

The Lab has steps that lead downward to the final level: the temple. At this point, if the PCs can return the rock (that contains the Ilee DNA), the temple will honor them. I used a fairly generic map that had a few rooms. I had one room that was not able to be opened but they could explore the rest. Again, you want emphasize the holy nature of the space, especially if you have a mystic PC. Also, you will want to discuss how it looks like no one has been in the temple for many years. If they carry the rock, it will guide them to the altar area, where it can be returned, unlocking the formerly locked door in the temple area. The temple will reward them with a staff of healing, which the PCs can use once per day to heal 1d8 hit points for the user and anyone touching the user.

This marked the end of this particular bounty or option, so the crew returned to their ship and to the Drift to await another set of options that’ll take them who-knows-where to do who-knows-what.  And as I engineer those other adventures I’ll share them here with you at NoE, so stay tuned!

Life is Cheap as Far As Thanos is Concerned: A look at the Wave Attack in Infinity War