By Brandon Morgan On Mar 8, 2018 Last updated May 16, 2018
Share TwitterReddItPinterestFacebookEmailPrint

Fallout… Fallout never changes. There’s a high likelihood that if you are a gamer of a certain age, you have spent plenty of time in the last decade shooting raiders in the Capital Wasteland, dealing with Caesar’s Legion outside of Vegas, or you have avoided talking with Preston Garvey so you didn’t get yet another one of those radiant quests to help a settlement in the Commonwealth.

After giving gamers hundreds of hours worth of Fallout content on PC and console, Bethesda and Fantasy Flight Games have finally brought all the wonders (and lethality) of the Fallout wasteland to the tabletop. In this fast-paced game of grit and radiation, 1-4 players must race against the clock to gain influence before the other players can do so, while two competing NPC factions operate in the background to win it all for themselves.

In true Fallout fashion, the game has a narrative structure that focuses on players completing missions, going on quests, and exploring what’s left of fractured and changed Earth in the wake of a nuclear holocaust.

The Fallout Board Game: Game Components 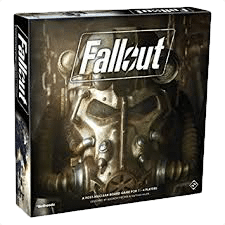 If Wasteland veterans felt like Fallout 4 forced them to endlessly collect a superfluous amount of junk, they need to brace themselves: there are a ton of component parts for Fallout the Board Game! But it’s not at all junk! Players certainly get their money’s worth in materials. Included in the box are…

Whew! That’s a lot of material components! While players won’t be breaking this stuff down to try and get precious components like screws or nuclear material, they may need a high Agility or Luck score to get all those back in the box in a neat and orderly fashion once they have punched the various tokens out. I found buying a couple of cheap CCG deck boxes helped organize the massive amount of cards into a more manageable arrangement. 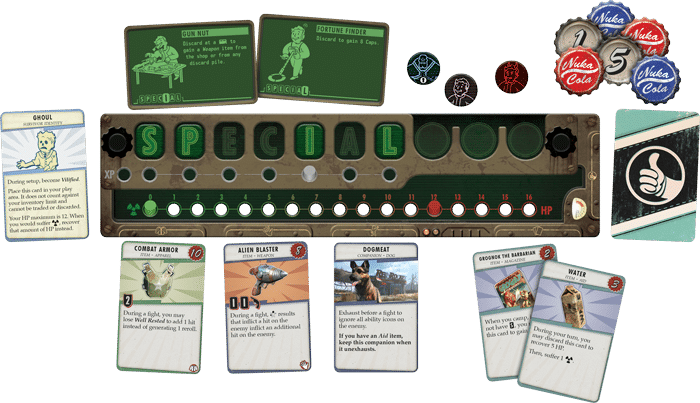 The Fallout Board Game: Gameplay

The Learn to Play booklet does a great job of walking players through how to set up for their first game. In nine easy steps, the Setup page will have even players who used Intelligence as their dump stat ready to play in about 20 minutes. The goal of the game is to complete enough missions and encounters to gain the prerequisite number of influence points to win (determined by the number of people playing). Oh, and survival. You need to somehow survive the post-apocalyptic horror-show that the Fallout universe is famous for providing fans. As always, surviving is the hardest part!

The gameplay is deceptively simple. Players can perform two of six actions on their turn. Those actions are… 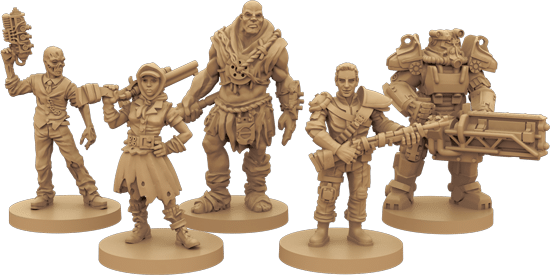 Once players have completed their turn, the enemies get a turn. This is accomplished by drawing an Agenda card. Each Agenda card has symbols for enemies at the bottom right. Starting from left to right, each of those enemies with the corresponding symbol activates and moves towards the nearest player, which could lead to a fight if they enter your space. Once all of the enemies have been activated, play resumes with the next round.

That’s it! The game offers a few deceptively simple choices for players to consider. I say “deceptively simple” because there is a large amount of strategy in planning what your character is doing three or four turns down the road. There could be Yao Guai or Deathclaw between you and your goal, so navigating the board takes a lot of thought.

No Plan Survives the Enemy – Getting the Authentic Fallout Experience

Fallout games have always been solo affairs dating back to the original PC games. In a way, the board game tries to honor this tradition. Though up to four players can join in on the Nuka Cola-fueled fun, there are not a lot of interactions one has with other players. For starters, there isn’t any PvP. Players looking to spend a large amount of time taking potshots at each other won’t find much to love about the game.

A mechanic exists for trading with other players, but that generally has to happen in settlements. About the only confrontational aspect of the game that players may experience is the fact that quests in the play area can actively be achieved by other players.

Fallout games, especially those early PC adventures, were thoroughly lethal. My solo playthroughs with the board game were equally brutal. I never outright won. I’m not sure if I am a terrible player or if I was the victim of supremely bad rolling, but there’s one big takeaway I got from Fallout: this game will kill you with no mercy! I have learned my lesson that the camp action should be a vital part of any solo players outings in the wasteland, especially if a player is as notoriously bad as I am when it comes to rolling. Active enemies go after the closest survivor. If a gamer is going solo like myself, it was like a slow Feral Ghoul march of death was heading towards me at the end of every round.

Another great connection to the Fallout universe is the game’s use of factions. Fallout has always had great factions, from the brutish Super Mutants to the militant mercenaries the Gunners, the factions bring the world alive with their unique motivations and clandestine schemes. Fallout operates in shades of gray, with each faction having its own wants and desires.

Each scenario in the board game has two factions vying for control of the map. These factions operate as A.I. that are influenced by how quests are completed. Certain quests benefit one of the two factions in the game, giving that faction a bonus on the Scenario card. If one of the factions gets to the end before the players and the other opposing faction, that faction wins the game and everyone else loses! It adds a “race against the clock” element that the first Fallout game on PC had when it was originally released. Players have to be mindful of their choices because their actions do impact the progress of these factions. 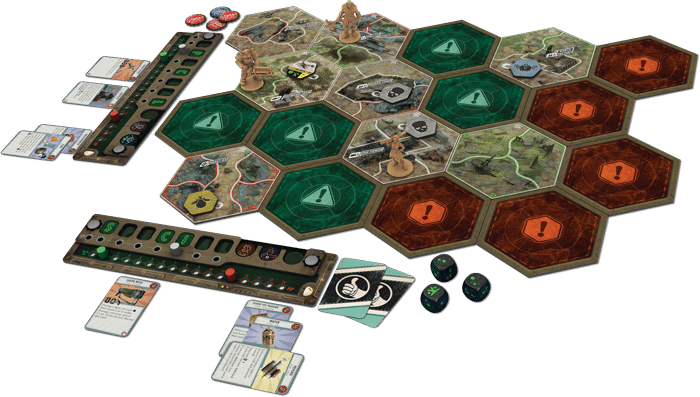 Fallout the Board Game: Final Verdict

The Fallout board game offers players a chance to return to the wasteland without having to plug into their consoles. Fans new and old will find much to love about this game. Fallout is a satisfying game that offers players a unique way to experience Fallout, while providing longtime fans of the series all the familiar post-apocalyptic tropes and quirks that they have come to love from the setting.

The board game focuses heavily on locations and themes established in Fallout 3 and Fallout 4, leaving the Vault door wide open for expansions into New Vegas and other locales explored in the original PC games. What fan wouldn’t want to take on Caesar’s Legion or venture out into the Mojave for a stroll?

Regardless of what the future hold for this game, Fantasy Flight Games and Bethesda have made a fun, invigorating, and challenging game for Fallout fans. Nothing from Fantasy Flight has disappointed me as a gamer yet, and their attention to detail in giving this game a truly authentic Fallout experience is very much appreciated by this fan. This game is well worth the caps spent!

You can get the Fallout Board Game from your FLGS, Amazon, or direct from Fantasy Flight.