One of the best parts about having a Marvel Unlimited account is that you can discover hidden gems of the previous generations of comics. Recently, Marvel added the 1984 Iceman miniseries and you should read it because it is bonkers. 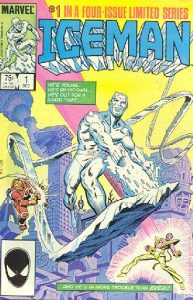 Bobby Drake has always been the also ran of the original X-Men, especially at this point in the Marvel universe. Beast had a long run as an Avenger, Angel obviously stood out more and Cyclops and Jean had long illustrious stories as part of the all-new, all-different X-men that Chris Claremont took to prominence. Strangely though, Iceman was a part of the 1981 animated Spider-Man and His Amazing Friends joining with the Firestar character as a part of the trio that starred on the show. I assume that that pop in pop culture had to be a part of why this mini-series got greenlit. 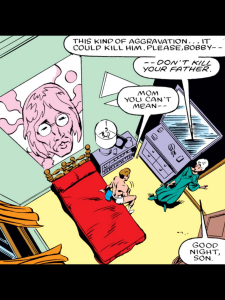 The set-up of the story of this miniseries is pretty straightforward at the beginning; Bobby Drake, accounting student, is returning home to celebrate his father’s retirement. Along the way, he bumps into a cousin, gives an exposition dump, and then meets his stunningly good looking neighbor. At the party, Bobby’s frustration at life is unleashed as he sasses at his uncle and then a fight breaks out at the neighbors. The story goes from there in some amazing directions.

First, Iceman goes to work to try and find and save the beautiful neighbor and THEN it goes into a crazy, bizarre story that includes time travel, an existential crisis and a battle against one of the forces of the universe. I truly think it is worth reading and checking out for a few reasons.

First, the very 1980s storytelling. This miniseries is a kind of storytelling that we don’t see much anymore in modern comics. The asides that remind everyone of what has happened thus far, the mental internal discussion that we see the characters have are just two of the old school comics indicators that stand out in this series. You forgot how much storytelling has changed in comics but the old format still works.

Second, the era nods. There are little quirks that really stand out. We get the typical mutant hating part of the story early on with the local police guy. This arc was a must in all Marvel Comics of this era. Second, we get a weird time travel arc, where Bobby visits his parents in the past and it almost has a Back to the Future element that is odd, as this came out before the movie. (I thought it was a blatant rip-off until I checked the dates.) 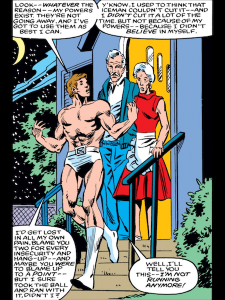 Third, the briefs.  For 2/3 of the story, when the story goes cosmic, Iceman, rather than being in his Iceman form is instead just in his white briefs, hanging out and having an existential crisis.

Fourth, the cosmic storyline. The idea that Iceman is the best character to have in a cosmic awe-inspiring story is somewhat ludicrous even in today’s comic book world, where and when the character has been given some serious development. To think that writer J.M. DeMatteis pitched an idea that spawns from “I am trying hard to not upset my parents” to “We have to defeat the menace Oblivion” in 4 issues is amazing and it is even more amazing that the series got made.

I was glad to stumble into this series. It is very weird and a bit whacky but it also is very much a fun read for the modern comics audience. If you have Marvel Unlimited, you should definitely add it to your To Read list.

So what about you? What old treasure of a mini-series or short comic run have you stumbled into and think is worth sharing?

Marvel Strike Force: Is there a Future for MSF? Part 2!

Marvel Strike Force: Is there a Future for MSF?