Have you ever played a combat encounter in which a Round seemed to go by as quickly as the six seconds indicated in the PHB?  Me neither.  To be fair:  It is an unrealistic expectation.  The six seconds statement is there largely to try and convey an element of speed and simultaneity that is impossible to replicate at the table.

But that’s not to say there aren’t a few things the PCs and DM/GM could do to prevent combat encounters from developing way too slowly.  I’ve sat at a table with 5 other PCs and had as much as 10-15 minutes pass between each of my character’s turns in combat…and we were not fighting an army.

So I’ve compiled six tips – 3 for PCs and 3 for DMs – designed to sustain that feeling of progress and momentum immediately following every RPG player’s favorite words:  Roll for initiative!

1.  Know your character.  I’ve written on this in a full post already, so I won’t unpack it all again here.  But sitting down to the table with prepared familiarity of the character you’ll be navigating the narrative with is huge when it comes to keeping things moving; especially in combat.  Invest a little bit of time before each session refreshing your memory on your character’s abilities, bonuses, DCs, damage dice, etc – it will always provide a major return during play.

2.  Treat every Turn as if you’re going next in Initiative.  If combat is beginning to lag a bit, the temptation is to just check out until the DM calls your name again.  If we weren’t paying attention, we’ll have to ask questions about how the combat developed since our last Turn –  basically hitting Pause on the action.

The accompanying advantage to this tip is that you should have a fair idea of what to do when your Turn does actually come around.  You might have to change your tactic/strategy/plan a bit after every other PCs Turn, but that’s also good practice.  Plus it keeps you fully engaged in the action.

For me (and Earth Nerd Clave who said as much as well), it keeps us from becoming bored between our Turns because it kinda feels like we go with every Turn.  We might not be moving minis or actually affecting anything on the battlefield, but we’re involved in the same thought processes that we engage in on our Turns, so there’s almost a placebo effect.

3.  Do something…anything.  Sometimes we get analysis paralysis because we’re afraid to fail.  We want to play our characters perfectly!  Only problem is that the “perfect play” rarely makes itself known as such, and so we freeze as we try to sort it out while simultaneously trying to see several Turns or even Rounds into the future to predict how the combat will evolve and willwhatI’mgoingtodonowputmeindangerlaterandwhatifIdiewhatdoyouguysthinkmycharactershoulddo?!

Calm down, friend!  Don’t let the fear of imperfection or failure prevent you from having fun!  Just do something…do anything…and see how it goes.

Jeremy Crawford offered up this advice up to Kotaku.com:

“When you don’t know what you’re gonna do: Dodge. When you Dodge, every attack roll against you has disadvantage.  I notice that a lot of players don’t realise that action exists.”

So you were frozen and uncertain of what to do (stalling combat progression), and now you’re harder to hit.  Double win!

DMs/GMs are facilitators.  So much control over the pacing of any aspect of the game is in their hands.  So here are two super easy tips that require no practice to institute and a third that, while requiring a bit more effort and skill, is worth test driving at least.

1.  Use the “on deck” system.  In baseball, the next player to take an at bat stands in an on deck 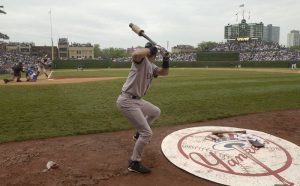 circle.  Its there that he starts getting his mind ready for the 98mph fastball, stretch a bit, knock the clay from his cleats, and even take a few practice swings.  He’s not at the plate quite yet, but he knows its imminent and that knowledge motivates him to ready himself.

So when you announce to the table that its Player A’s turn in Initiative Order, drop in a quick “Player B, you’re on deck.”  That simple.  If they’re not preparing for their Turn already (Tip #2 above), they are now!

2.  Counting down.  I’ve not been known to use this myself, but I have heard more than one actual play podcast use this as a means of moving things along.  A player is taking much too long to be decisive, so you start counting down from, say, 10.  They’ll get real decisive, real quick!  Ideally this tactic would not come up very often.  Could be that using it once will communicate to the table that dithering, lallygagging, stalling, and otherwise halting the flow of combat isn’t what you want at your table.  You shouldn’t expect everyone’s Turn to zip by in seconds, but minutes of inaction can be a real bummer for the whole table.

3.  DM/GM like a dolphin.  This is some fantastic advice from The Angry GM. He explains a neat way of thinking about the flow of combat by talking about the way a dolphin will swim near the surface of the water.

Jump, breathe, plunge, swim. The swimming maintains the forward momentum, the breathing keeps them from – you know – dying.

Mechanics in D&D are like breathing. You have to keep doing them or there is no game. But they don’t keep the game actually moving forward. That’s the narrative. The narrative is what drives the momentum of the game forward. And that is why every turn in combat begins and ends with narrative. That’s where the game plunges down under the water to keep the speed and momentum. And then we break out of that to resolve the mechanics and take a breath of air. Then, splash, back down into the water.

Those transitions are important on a fundamental level. They keep combat exciting and interesting.

Sometimes we get too caught up in the mechanics and everything feels – surprise! – too mechanical.  The dolphin method makes combat take on a feeling of constant motion.

Too often the way we navigate combat makes it feel like no one on the battlefield is moving or doing anything except for the person taking their Turn; like that scene from X-Men when Professor X freezes everyone in the airport.  Seriously.  Watch this scene and picture your last combat operating like this:

Silly, right?!  But this is exactly how combat feels without the narrative transition The Angry GM argues for.  This dolphin method helps convey the speed and simultaneity that I believe Wizards of the Coast was looking for what they stated that each Round lasts six seconds.  The dolphin method is some of the best advice I’ve ever read concerning combat flow.

What tips and tricks do you use to maintain a good flow to combat at your table?  Join us in our Character Sheets Facebook Group and let us know!