I grew up in West Virginia during the 80s, so playing in the woods was simply a part of my every day living. And my favorite place to play as a young whipper-snapper was the woods just behind a local junkyard, because that was where we could grift a little salvage to help us build cabins and whatnot.

At this point I will pause to allow you to make West Virginia jokes, because although I didn’t play in the woods barefoot, I did play often with my cousins. Go ahead, make the jokes. Many are quite humorous.

OK, we’ve established that I’ve slept in the woods. And it’s that sense of exploration and discovery that I often navigate toward in my roleplaying games. I love wilderness adventures, in other words.

Ultimate Wilderness: Packed With the New 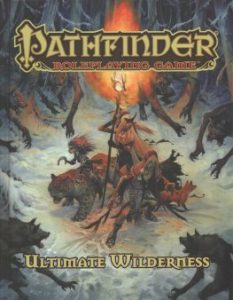 The book has everything you want in an RPG book: new races, new class options and archetypes, new spells, and new magical gear. It also has a brand new character class: the Shifter. More on the Shifter in a moment.

Let’s talk first about the new races, all of which have a woodsy, botanical flavor to them. My favorite are the Ghorans, A ghoran’s “skin” is a complex layer of vines and petals, which give them a unique look. In their belly, they house a seed in which its memories are implanted (pun intended) every 20 years in order to replicate their consciousness. It’s cool and another example that, even with the depth of Pathfinder, there is plenty of creativity left at Team Paizo.

Again, I’m a sucker for the discovery and exploration aspect of roleplaying games, so chapter 4–Mastering the Wild–was a standout for me. When D&D 5e was released, I was disappointed in the lack of support for foraging and harvesting, so I actually home-brewed some rules for it. But, as usual, Paizo shows that depth and breadth of rules is where they excel. 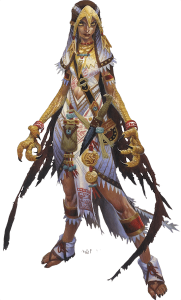 If you currently play any type of ranger, druid, alchemist, or something similar, you’ll get immediate benefit from the foraging rules that allow for the canvasing of wilderness areas for supplies. It also includes a framework for harvesting poisons from slain creatures and provides engaging examples. In addition, this book is an herbalist’s dream.

I’m also a sucker for new gear, and there is some neat stuff in Ultimate Wilderness, making this the RPG book equivalent of Fantasy REI. But before one gets to the gear, the book has 45 pages of goodness on forest companions and familiars, from fuzzy, cuddly koalas to sucky lampreys. This chapter has incredible depth and, although a criticism could be made that much of the information is curated from existing Paizo products, that’s an uncharitable criticism, as there is good value in collecting it for players in a well-organized format.

Now for a brief mention of the production flourishes that come with a Paizo product. It’s easy to take such things for granted, but each chapter begins with a two-page spread of a gorgeous illustration of a Pathfinder Iconic character with a little bit of flavor text to the side. This–along with other little production flourishes–are part of what makes Paizo the best.

Now let’s talk about the Shifter. The biggest selling point of a new Pathfinder hardcover is often new character class options. This, unfortunately, is a weakness of Ultimate Wilderness. The new class in the book is the Shifter, a character described as a shapeshifting character that is more martially inclined than the spell casting druid.

Feelings matter, just ask my wife. Characters should be balanced but they should also feel fun to play. Paizo heard their community and made some tweaks to the Shifter class, posting them on their website. Kudos to Paizo for doing this. Mistakes happen, and Paizo–a company well-known for being engaged with their community–turned in a bottlecap and made their crit fail roll into a natty 20 by responding to their players. The changes will be reflected in future printings of the book, so I encourage you to click the link above and give them a look.

In summary, Ultimate Wilderness is not the strongest book from the Pathfinder team. It’s not an automatic purchase the way, say, Advanced Class Guide or Ultimate Magic is. But it is a solid book with a nice variety of items, rules frameworks, and player options to bring nice value to your games. And it is obviously of particular interest if you dig the “outdoorsy” aspects of RPGs (this book would nicely support the Ironfang Invasion AP for example).

Further, with the announcement of Pathfinder 2.0 coming in 2019, Ultimate Wilderness is the next-to-last hardcover coming out for this system of rules, followed only by a Planar Guide. With that in mind, Ultimate Wilderness is a fitting book. Purchased alongside the ten years of “Ultimate” and “Advanced” hardcovers for the current edition of Pathfinder, one is struck by what a thorough and…complete ruleset exists for Pathfinder.

I wish I would’ve had this book when I was 12 and building cabins in the woods of West Virginia. I could’ve foraged up some nice spell casting components and IDK, maybe summoned a squirrel familiar or something.

[Disclosure: Paizo provided Nerds on Earth with a copy of Ultimate Wilderness for review.]