By Michael Ray Johnson On May 22, 2016 Last updated May 21, 2016
Share TwitterReddItPinterestFacebookEmailPrint

The Pathfinder Advanced Player’s Guide set the style for many of the Pathfinder rulebooks that have followed it. As I discussed last time, it not only added lots of the features people expected from 3.5 D&D rulebooks (like new feats and spells); it also added several new things like archetypes that made the Pathfinder RPG more of its own unique game, separate from D&D.

Many of the books that have come out since the Advanced Player’s Guide have continued to offer more of those same elements. And if you take a look at what’s available in the Pathfinder Roleplaying Game line of hardcover books, you’ll see several books with similar titles.

Certain words show up repeatedly, such as “Advanced”, “Ultimate”, or “Bestiary”. These repeated words can give you a broad idea of what to expect of a book’s contents, although there is certainly some variance and even some overlap.

It is the “Advanced” and “Ultimate” books that carry on in the style of the Pathfinder Advanced Player’s Guide, offering lots of new (mostly player-oriented) options. To date, there have been five books published with “Ultimate” in their titles. The first of these are Ultimate Magic and Ultimate Combat, and are the ones most similar in style and layout to the Advanced Player’s Guide. 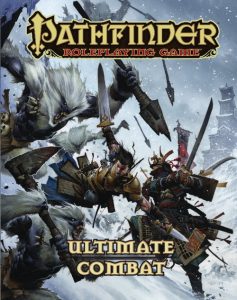 Pathfinder Ultimate Magic focuses, not surprisingly, on magic, and Pathfinder Ultimate Combat on combat. Both books include new options for classes (including entirely new classes) and archetypes, new feats, spells, and more. And both books can add a lot to your games.

Ultimate Magic adds the magus class to the game, a combination of fighter and wizard, allowing you to play such a character without having to multiclass between the two original classes. (And is a class that has recently popped up on the Glass Cannon Podcast). 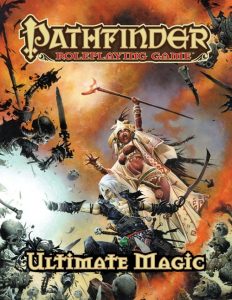 Ultimate Combat has a particularly large large selection of new feats, while Ultimate Magic has a considerable selection of new spells. However, both books offer both options. New feats in Ultimate Magic tend to focus on options for spellcasters, while the new spells in Ultimate Combat are combat-oriented spells and spells for classes like rangers and paladins—martial classes that dabble in some magic.

Both books also contain new rules additions that can be added to your games. Ultimate Magic adds rules for spell duels, binding outsiders (creatures like demons and devils), and building constructs like golems. There are also new familiars and guidelines for designing new spells. Ultimate Combat includes rules for guns and other firearms, as well as more primitive weapons and armour. There are also rules for duels, performance combat (fighting for entertainment in front of an audience), and siege weapons. Ultimate Combat also contains a full chapter on vehicles in the game.

Most of the options I’ve mentioned regarding Ultimate Magic and Combat are additions to the game. They are things you can include in your game without modifying anything else. However, both Ultimate Magic and Ultimate Combat also contain some variant rules that allow you to try other ways of doing things in your game. 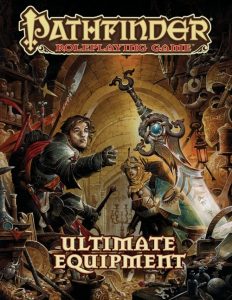 While magic and combat are significant parts of any Pathfinder game, there are other areas to the game as well, and that’s where the other “Ultimate” books come in. Ultimate Intrigue is the newest, just released in the past month. It focuses on social skills and includes a new class (the vigilante), as well as rules for heists and pursuits.

Ultimate Campaign is a bit different in style from the other “Ultimate” books in that its options are aimed more towards gamemasters than players. I’ll talk a bit more about those options in the future. However, for players, Ultimate Campaign does contain an extensive chapter on developing backgrounds for your characters. It also has one of the most comprehensive selections of traits found in any Pathfinder book published so far.

Ultimate Equipment is also somewhat different in style from the other “Ultimate” books. It contains no new classes, archetypes, spells, or feats. Instead it is one massive catalogue of gear and magic items. It compiles all the equipment from the Core Rulebook and many other Pathfinder books, and adds lots of entirely new items as well. It’s the ultimate reference book for equipping your characters.

It’s important to remember that everything included in these books is optional. Whether or not something is included in your game is up to the people in your group and your gamemaster. The gunslinger is a good example of something that not every group will want. Many people don’t like the idea of including guns in a fantasy “mediaeval” setting. Many people do like them. Neither opinion is necessarily right or wrong.

What matters is what works for your own particular group. If your group likes guns and gunslingers in the game, then include them. Otherwise, leave them out. The same goes for variant options like Words of Power. The choice to include or exclude these things is entirely up to you and your group.

But we’ve still only barely scratched the surface of everything that’s available for the Pathfinder Roleplaying Game. Next time, I’ll take a look at the other books with “Advanced” in their title, and talk a little more about how to decide what works for your games and what doesn’t.

Until then, here are the first articles in the series: Breaking into Pathfinder and Level up Your Pathfinder Game. And here is where you can get the great Pathfinder “Ultimate” books mentioned above: