Tabletop roleplaying games can be one of the best pastimes there is (if not the best). Roleplaying games offer so many different things to so many different people: a chance to delve into your more creative side and weave exciting stories of adventure, a chance to be someone you’re not, or just a chance to roll some dice and pretend to fight monsters. Whatever your reasons for getting into roleplaying, it’s also a great opportunity for socialization with like-minded people.

However, breaking into roleplaying can be a bit of an intimidating process! There are a lot of roleplaying games out there. Different games have different rules—some more complex than others—and some games are more or less popular than others, making it sometimes difficult to find a group.

One of the most popular roleplaying games out there is Pathfinder, meaning it’s not too difficult to find other people interested in playing it. But Pathfinder has one major drawback. It may be popular, but it’s also one of the more complex roleplaying games. Pathfinder has a lot of rules and a lot of rules supplements. Just looking at the number of books and options available can leave people new to the game unsure of where to start.

At the heart of Pathfinder is the Core Rulebook. 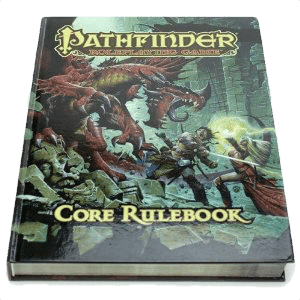 Theoretically, the Pathfinder Core Rulebook has everything you need for a new player to learn to play the game. In practice, however, it’s not quite so straight-forward. Pathfinder is based on the 3.5 Edition of Dungeons & Dragons. (Learn more of Pathfinder’s origin story here.) But D&D 3.5 was also a very complex game. Pathfinder had to condense material from numerous books into just one book, the Core Rulebook.

It is a phenomenal book! But it’s also a massive one at close to 600 pages. Its sheer length can be intimidating to newcomers. Who really wants to read a 600-page book just to learn how to play a game? However, even if you do sit down and read the book cover to cover, you still might not have a very good idea how to play the game.

The Core Rulebook is a book of just that: rules. There are so many of them, there’s little space to actually explain how to play the game. The book’s introduction has an “Example of Play”, but it is only of minimal help.

More than that, the organization can leave newcomers confused. There is a logic to it, and once you’re familiar with it, it makes finding things relatively quick and simple. But until you’re familiar with it, you have to face things being mentioned that haven’t actually been described or discussed yet. When it comes down to it, the Core Rulebook is most useful to people who already know how to play the game.

So just how do newcomers learn this game?

There’s a saying that the best way to learn a roleplaying game is to join a group of experienced players and learn from them as you play. There’s truth to this saying, but simply joining an existing group isn’t always an option.

The Pathfinder Beginner Box: The Basics Plus Extras

Luckily, other options exist. First up is the Pathfinder Roleplaying Game Beginner Box. This set provides a streamlined version of the Pathfinder rules and presents them in an easy to learn manner. The box comes with two softcover books, a complete set of dice, over 80 pawns (cardboard miniatures to use in your games), pregenerated characters, character record sheets, and a large, miniature-scale map. 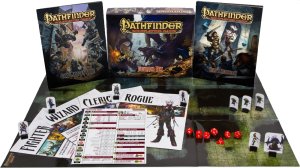 The first of the books contained in the beginner box, the Hero’s Handbook, takes you step-by-step through the process of creating a character and then how to play the game. The layout is intuitive and easy to follow.

The second book, the Game Master’s Guide, does the same for the game master (or GM). The Beginner Box is one of the best ways to learn the game if you are completely unfamiliar with Pathfinder and have no one else to teach you.

However, the Beginner Box is not the entirety of the Pathfinder game. It only includes four of the eleven classes found in the Core Rulebook (cleric, fighter, rogue, and wizard), and only details advancement up to 5th level (a measure of a character’s power).

It also leaves out some of the more complex rules, particularly many of the combat options. It is a complete, playable game in its own right and a great place to start, but eventually, you’ll probably want the full Pathfinder experience.

The Pathfinder Strategy Guide: Putting It All Together

Going from the Beginner Box to the Pathfinder Core Rulebook is certainly possible, but can still be confusing and intimidating. To help along the way, there is the Pathfinder RPG: Strategy Guide, a book designed to help new players learn the game. 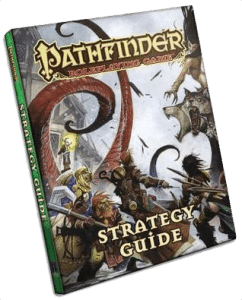 In a layout very similar to that used in the Beginner Box, it takes you step by step through designing characters using the full Pathfinder rules. It covers all 11 core classes and provides at least two different ways of developing each class. It also guides you through the basics of combat and other aspects of gameplay.

Of course, there’s a lot more to Pathfinder as any glance at a product list or store shelf will quickly tell you. There are now over 20 hardcover rulebooks published for the game and hundreds of softcover supplements and adventures.

This can seem like a massive investment of time and money. But it doesn’t have to be. It’s important to remember that everything beyond the core rules is optional. The game runs just fine without all those other things.

However, over the coming weeks, I will be providing you with a brief overviews of those other options to help you decide whether you want them in your games. Until then, if you’re new to Pathfinder, I hope you enjoy it. As intimidating as its mountain of rules can be, it’s absolutely worth it in the end.

Here is where you can find the Beginner Box, Pathfinder Core Rulebook, and Strategy Guide. And if you want really in depth reviews of dozens of Pathfinder books, visit Of Dice and Pen.