By Michael Adkins On Apr 23, 2016 Last updated May 8, 2016
Share TwitterReddItPinterestFacebookEmailPrint

So maybe the question for us isn’t where to start, but what to start.

With that question in mind, I’ll post monthly first impressions of #1 issues fresh off the shelves. If you like what you read here, odds are fair you can hurry on over to your own local comic shop and begin at the beginning – which is an appropriate place to start. 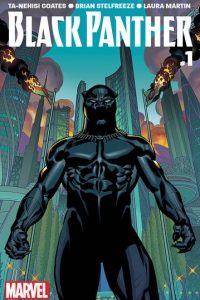 Introduction to the Comic The nation of Wakanda is restless after a series of cataclysmic events – a massive flood, a coup orchestrated by Dr. Doom, and an invasion by Thanos. In this fragile state, a woman named Zenzi has revealed to the Wakandans their inner agony and rage concerning their nation’s state and it bubbles out of them.  In their fury, they attack even their king, T’Challa, the Black Panther.

Even from within T’Challa’s own royal guard, the Dora Milaje, there is unrest and rebellion. Two of their number steal Midnight Angel prototypes and become figureheads for the internal revolution yet to come.

T’Challa feels like a failure to his people, his country, and his own blood – specifically his sister, Shuri, who he is seen trying to resuscitate in the final panels.

Why should you care? My fellow writers were right in being excited about this title.  Black Panther #1 is really intriguing from the get-go. Coates is renowned for his writing on cultural and political issues, and Black Panther #1 is simply dripping with them both.

By the end of this issue, you get the feeling that he feels as if he’s losing that fight. There is civil unrest shown by an uprising of workers at a vibranium mine, political unrest surrounding the Dora Milaje, and even personal unrest portrayed in those final panels by his revival attempts with Shuri.

And the most intriguing aspect of the book for me so far is that T’Challa can’t just throw punches at the problems. There is going to be some tremendous depth to this book under Coates’ supervision. I love what T’Challa’s mom says to him about midway through the book as I think it hints at the tone we can expect for the rest of the series: 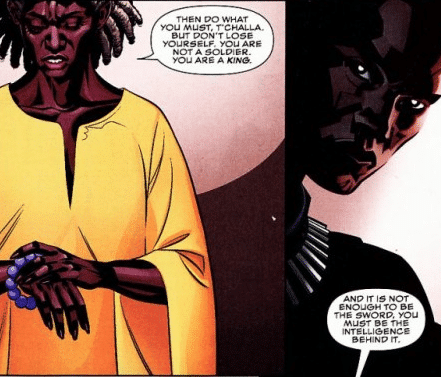 That line – practically all by itself – has me hooked and eagerly anticipating issue #2.

(BTW: I LOVE that the ears on the suit look like they’re pinned back instead of pointing straight up.  Makes T’Challa look angry and awesome!) 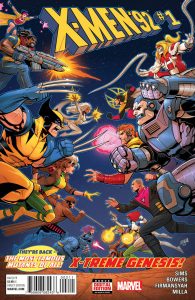 Introduction to the Comic Xavier’s School for Gifted Youngsters is taking on new students, but on the first day of school Beast’s “X-Men 101” class is interrupted when Maverick throws himself through the window shouting, “X-Men!  They’re coming for you!”

A brief tussle between the Protectorate and a handful of X-Men (Gambit, Wolverine, Rogue, Storm, Bishop, and Psylocke) is ended when Maverick barters with the Russians for 24 hours of freedom in exchange for some information. The information in question: The von Struckers have managed to purchase a Soviet Super Weapon – a monster named Alpha Red – and the X-Men seem to be their target.

Storm boldly declares that the X-Men will prepare to defend themselves, but Maverick reveals that Alpha Red is already here. In the final panel of the book…well, I don’t want to spoil it completely!

Why should you care? This book definitely has a very cartoony look and feel to it, and not surprisingly so given the idea behind it which is basically to bring the classic cartoon to print – although it shouldn’t be misconstrued as a port of any kind. The cover is even evocative of the cartoon’s intro, though featuring different characters.

X-men ’92 has a few intentionally comedic panels – notably Wolverine on rollerblades and Rogue bringing Ursa Major down atop Omega Red’s head – and while I wasn’t sure how I felt about those things on my first read through, I ended up really enjoying them on my second.

The X-Men cartoon was my first exposure to the mutants, and first impressions suggest that it will prove worth following for more than nostalgic reasons.

While both of the #1s this month were Marvel titles, that won’t always be the case! Be sure to check back next month for two more first issues.

A Brief History of the Atomic Knights, Part I