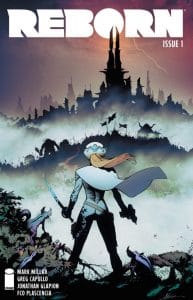 Introduction to the Comic  We open on a sniper taking out several civilians in Minneapolis in 2002.  After two pages of bullets and blood, a man wakes up in a lush meadow with faeries flitting about his head.  He’s greeted by a group of individuals armed with swords and guns lead by a woman who says,

Guys, I’m sorry, but there’s no time to explain.  I know you look different and have no idea what’s going on…but there’s more important things to worry about right now.

At which point we’re treated to this: 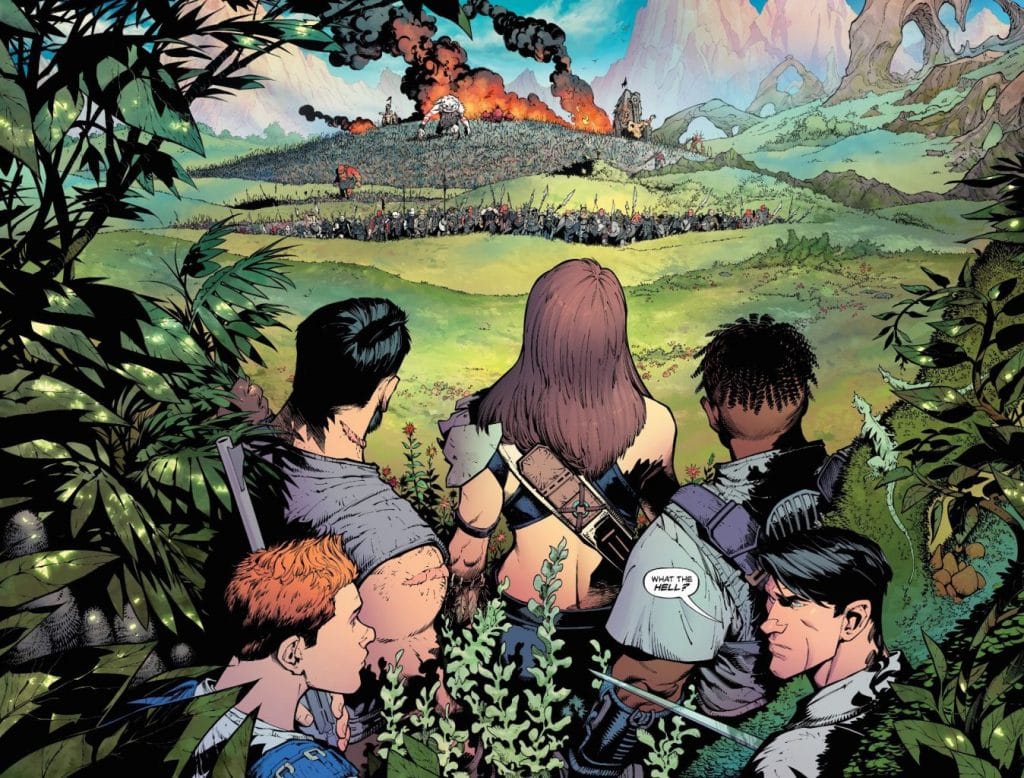 Another sharp contrast of scenes as we listen in on an elderly woman (Bonnie Black) recounting some of the deaths in her family.

And now she’s 15 years her mom’s senior at the time of her death and feels like her time is coming soon.  She’s not ready.  She doesn’t think there’s anything on the other side of death; no god, no reunion with family, no nothing.  Its just a “light switching off.”

But when her light switches off (so to speak)…there is something.  She finds herself young again and dressed oddly, staring up into a bright white light.  But it turns out that the light isn’t at the end of some tunnel; more like at the end of some turret…and it opens fire!

She’s saved by the last second efforts of a man who then shoots the armed vehicle out of the sky, grabs an axe, and dispatches a large dragon.  Bonnie surveys her surrounding and she’s in the midst of a battlefield.  Demonic warriors are literally ripping people in two until one of them identifies her as the “protector” and they flee in a fearful panic.

She’s then called “the savior of Adystria” and seconds later she hears her first name, Bonnie, spoken aloud by the man who has saved her moments earlier.  She demands to know who he is and how he knows her name, and when he removes his helmet…he’s revealed to be her dad who says, “We’ve waited for you such a long time, angel…let’s go see the others.”

Why Should You Care?  Guys, I don’t know what there isn’t to like about this first issue.  Capullo’s art is amazing, the story is high fantasy, there are hints of the Hero’s Journey, and it all 100% works for me. 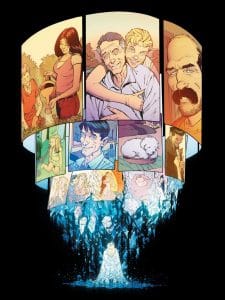 I read through the thing three times so fast my eyes could hardly keep up with the demand I was placing upon them.  The first read through was just for first impressions, the second one was because I wanted it again, and the third was just to stare at the art.

I am super intrigued by this take on life after death, the conflict that seems to be taking place within it, and questions like: 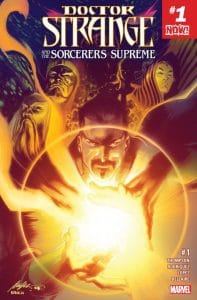 Introduction to the Comic  Before the credits page, we’re treated to a scene of Merlin (yes, that Merlin) leading a chained and shackled being with the Roman numeral twelve (XII) on its largely featureless face towards a large padlocked door.  Merlin is arguing with King Arthur (yes, that King Arthur) about his course of action when Merlin’s apprentice attacks and is quickly blasted, revealing him, too, to be one of the featureless beings with Roman numerals (this time VIII).

Arthur starts to tell us what they are but is cut off (DARN IT!) by Merlin who then locks both of the creatures behind the door.

In the present day, Doctor Strange is battling a creature with an axe when Merlin drops in on him, fells the creature, and whisks him off.  During the time travel, Merlin explains that the Empirkul unleashed a beast called The Forgotten who is collecting magical relics and is super evil.  Merlin has taken the liberty of traveling across time to round up as many Sorcerers Supreme as he can get his hands on.

Among them are a young Ancient One (the guy who would eventually be Stephen Strange’s mentor but at the moment he has no clue who Strange is) and an old Wiccan (who will replace Strange as the Sorcerer Supreme in the future, but Wiccan won’t divulge how or when that comes to pass).

The Forgotten then bursts forth from the ground and makes quick work of Merlin before the others can react.  The last page treats us to a panel of the door from the beginning of the book, only now a bloody key has opened the lock.

Why Should You Care?  I came into this with almost no experience with any of the Doctor Strange comic lines, so it was easy to feel a little lost or uninformed.  The Sorcerer Supreme is practically magic-less?  And what the heck is the Empirikul that supposedly did this (I actually knew a little about the Empirikul thanks to another #1)?

growing collection of past and future Sorcerers Supreme.  Magic is flying everywhere and it was just plain old fun to run my eyes over it all.

I still have no idea what “The Forgotten” is or what those things are Merlin locked up in the intro or how many there are of them behind that now open door or even how and when that door was opened (I honestly couldn’t figure out if it opened upon Merlin’s death or sometime earlier by someone who took the key forcibly), but I know that every bit of it is bad news if its going to take the combined efforts of several Sorcerers Supreme.

I feel like this is me diving into the deep end of Marvel’s magic stuff, so I may shelf this title for a bit and give Mystic Apprentice #1 a go (a Doctor Strange story that starts at the beginning; well-timed to release along with the movie) and check The Oath out on Jason’s recommendation.