I grew up at the tail end of the era when people did things like listen to records backwards for secret Satanic messages and synced up Dark Side of the Moon to The Wizard of Oz. It has seemed that since the very early days of rock and roll, the average fan has been convinced that there is just something more to that world. And that notion is the launching point for the upcoming Image comic series Rockstars. 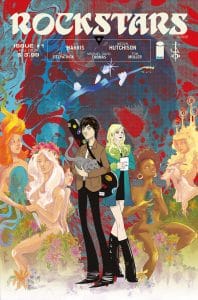 Writer Joe Harris and artist Megan Hutchison weave the opening issue of the series to be a great launching point. Harris, who is a long term writer on such books as X-Files (Seasons 10-11) and Snowfall, sets the stage of a story that happened long ago in the history of rock, but that is also being repeated today. And as you can imagine Hutchison, a relative newcomer, has all the deep history of the imagery of rock and roll to draw from, and has done so beautifully.

Jackie is the center of the story for the early part, as he, in modern day, is somehow obsessed with and investigating the murder of two groupies that happened in the 1970s. Suzanne Berrens and Becky Albright were just two teenagers trying to make it backstage and when they did, something went wrong. Jackie seems to be the comic book version of William Miller, the teenage rock and roll writer in the movie Almost Famous. He seems to have the same degree of love and depth in his understanding of rock and roll, while also having an obsession on this case and its surroundings.

Jackie is later joined by Dorothy Buell, who in a relatively short number of pages seems to assert herself as a comic book Veronica Mars, sassy, witty but also deeply caring. The two of them form a quick allegiance that leads them into some trouble and discoveries at the end of the issue.

Rockstars has a ton of potential. Harris clearly understands how to write horror comics and his partnering that genre with rock and roll’s history gives him a chance to really explore some new angles. The previews of the comic have also talked about how certain eras will be featured, such as the British Invasion, Punk, 80s Metal. That dynamic should work well for the story, but the art that it could allow Hutchison to portray could be astonishing. Rock and roll has all the iconic imagery an artist could want to twist, change and redeem. That could be what winds up making this a very special book. 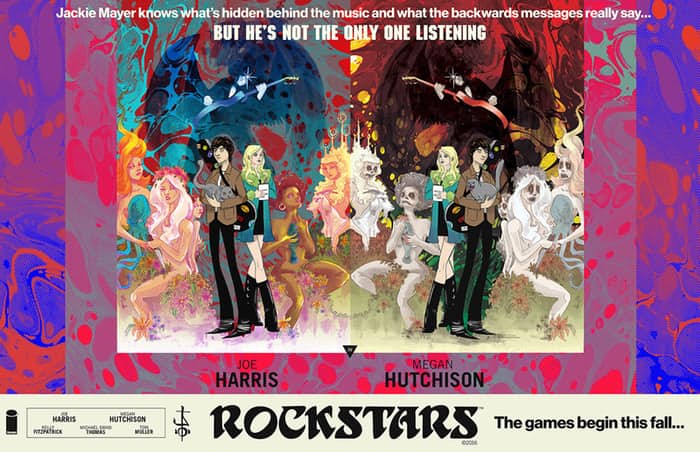 Rockstars #1 gets 8 out of 10 nerds. It is a good first issue and sets the table well for what comes next in the story. But, it should be noted, this is an M title, meaning it is a mature title, with some of the excesses of the rock and roll lifestyle shown on the pages.

Rockstars #1 comes out on December 14, 2016 at your local comic book shop and online at comixology.com.