Image Comics has become the place where comic creators take their stories to share them with the world. More and more we see comics and ideas from influential creators that wouldn’t fit in the Marvel or DC universes, especially since DC has ended its Vertigo imprint. One of the latest new titles that falls into this category is Black Cloud, which debuts with issue #1 on April 5th. 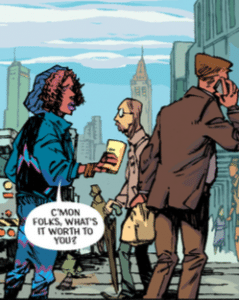 with this book. The story is told by Ivan Brandon, who has substantial experience as a storyteller in a variety of mediums and Jason Latour, who is best known as an artist but, as this story demonstrates, he has substantial gifts as a writer as well.

The book is drawn by Greg Hinkle, most notably known for 2016’s Airboy series and colored by Matt Wilson, who also works on the award winning Paper Girls comic. This combination helps to make the story behind Black Cloud that much more interesting.

In the first issue, which clocks in at 27 pages, we learn that the world has lost its sense of story and dreams and yet there are some that can still make that connection. The lead character Zelda seems to be a type of medium, able to bridge this world and its lost dreams with another world, that is much different. In this world, she is a young one on the streets, offering to dream for money; in the other world, she clearly has gifts and prestige. So is the opening hook to this story done well?

First, the art is a major force in telling the story. There are two different worlds being shown and the use of color is masterful, helping to easily distinguish between the two worlds and when they connect; and the palette that Matt Wilson is using is very evocative of the work he has done on Paper Girls as well. Additionally, the fantasy world Zelda can lead others to is truly unique.  While the reader isn’t given much time there, there are fantastical characters that make you understand the uniqueness of the world, while also peaking interest.

Second, the premise of the story is well done. It isn’t a stunning surprise to find that 4 comic book creators are bemoaning the loss and sense of story in the world; they likely have seen it up-close and personally. But the touches that they bring around it show us how much that loss is true.

While everyone has done the bit about how we are married to our screens, that idea is leveraged to great appeal here; the hollowness of the screen and the attention we give it makes us all wonder if there is something more. And Zelda can give us a compelling answer.

Third, we are given enough to establish the rough sketch of the story but not unravel the whole thing. We learn that there is something that can draw Zelda between the two worlds. We see an economy and how a storyteller profits from it on this side. There is a power dynamic that is introduced and I am sure that will play out over the rest of the series in both worlds.

All in all, this premiere gets 7.5 out of 10 Nerds. There is a premise here that I suspect will play out better in a trade where the second part is readily accessible. But this issue as a stand alone offers much promise for this new series.

New to Comics? Looking for Comics that are new to you? NPR…