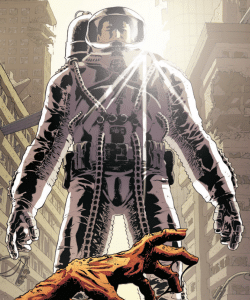 Sometimes, a work of art can be greater than the sum of its parts. The collected edition of the 4 issue comic series Eclipse is an example of that.

The pieces of the story can feel kind of pedestrian. If you are making the elevator pitch of this book, you would talk about a dystopian future, a renegade official who doesn’t want to be a hero and corruption at the highest level. But the pieces add up to a greater story in this collected edition, which is being released this week.

Zach Kaplan is a screenwriter, with Eclipse being his first published comic, and that training shows. This book, like many short runs series that the comic industry produces, feels like a pitch for a television series or a movie. Once you accept that this wave is the new standard of comics today, Eclipse is a very good example of that type of collection. 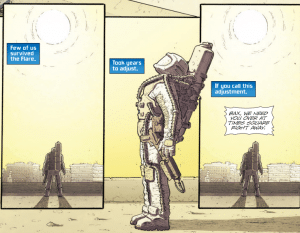 The dystopian future. The inciting event for the world to turn all dark, in this case literally, is a solar flare followed up with sun rays that now make living on the surface of the Earth during daylight deadly. So, 10 years later, the few survivors in the world have flipped in some ways, as we have the people of the world living under the Earth during the day and coming out to live in New York City during the night. Giovanni Timpano is the artist for the book and does a tremendous job.

His art is evocative in both the personal moments but also in some cityscapes that he has to draw; the attention to detail is amazing. And his artwork his only improved by the coloring of Chris Northop. The coloring has to help create two worlds: the daylight city and the underground life that everyone is living; Northop’s work really does a great job of making those two worlds come alive. In particular, the light of the world is extremely vivid, almost blindingly so but it really helps sell the tone of this book. (The collected edition has some excellent commentary around how the book was created in some additional material at the end of the story.)

The renegade official. The main character of the story is David Baxter, who now is one of the few people who knows how to use special suits to be out in the city during the daylight hours. He gets drug into heroics for the second time, when someone is murdered by being out in the sun. We learn from some flashbacks, he had to help officials when the solar flare first happened and it cost him his family. Think of the grizzled, down on his luck character that Bruce Willis portrays and you get the idea. 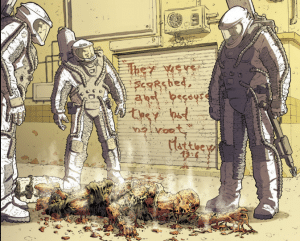 The corruption. You need to read the story but know that everything is never what it seems in the dystopian world.

It may one day some up on the large screen or small screen, as there are definitely some pieces and characters that are just meant to tease what may come in the future, including the villain, the rich girl socialite with a heart, the former scientist love interest for the main character and a police detective. But the comic collection stands on its own as a solid collection.

If you like science fiction and this book sounds interesting based on those premises, the collected edition is worth checking out. You can get it here.