What happens when “they” arrive?

For nearly a century, the world has been fascinated and searched out in its literature and stories, what happens when the “aliens” arrive. And that focus moves us all to explore something that is true right now: the human condition.

The film Arrival is the latest science fiction movie that tackles the idea. Led by director Denis Villeneuve and the able cast starring Amy Adams, Jeremy Renner and Forest Whitaker, this film is at its core a story of what happens in the first contact as aliens arrive on planet Earth. And it is one of the most compelling science fiction movies in the last 5 years. 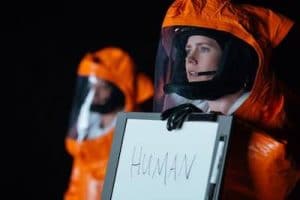 The film centers around the character of Amy Adams, a linguist who is quickly drafted by the American government to help them communicate at this first contact, as 12 alien pods have arrived scattered in a seemingly random pattern around the world. So she and the science nerd Jeremy Renner go to Montana and make first contact and start the process of working together.

Here are some of the reasons that this film is so involving and moving:

First, it is very smart science fiction. From their arrival, Amy Adams and the teams involved are working together to help make communication work. That first bridge is a mighty hurdle and one that takes substantial efforts and involvements. When the vast human wor 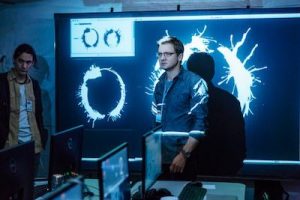 ld wants to know “Why are they here?”, Adams’ character points out how much is involved in getting to that answer, and to do so without having a bias going in.

Second, the film (and time within it) is paced really well. The work to get the first connection between the arrivals and the scientists of the Earth takes time but once we get the initial connection, the movie pace quickens. We are given the drudgery of building a vocabulary to communicate; we just get the set-up in various scenes that the process is happening, as slowly as one would think but that progress is being made as well.

Third, this film rises and falls on its epic soundtrack. This may not end up as an iconic soundtrack but the story of this film is told in part through its amazing soundtrack. But it doesn’t feel forced. Sometimes soundtracks play in such a way that the audience is given the clear clue: “This is how you are supposed to feel right now.” This film and its soundtrack are smarter and more gracious than that. The feel is tied to the story and is mesmerizing in some places.

Fourth, and this is kind of spoilery, so if you haven’t seen it, you may want to skip this paragraph: this movie has smart aliens, and not just in the technologically advanced way. Someone took time to create a new creature that is fully un-human. The visitors aren’t bipedal mammals that speak using their voices. There is something more going on here, and that thoughtfulness helps drive that communication plot forward. If the audience was given a wide-eyed Area 51 crash victim that Hollywood can too easily default to, this movie maybe doesn’t work as well as it does. And the explanation of how they think and communicate fundamentally differently works in part because of the intelligence given in the creature design. 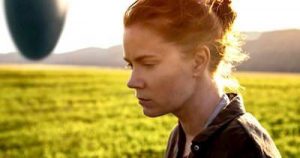 Finally, the movie is ultimately about the human condition. We see the powerful wrestle with control when they don’t quite have the ability to force everything. We see how the world would freak out and panic and then settle into a peace that will ultimately be challenged. We see the desire to hoard and keep technology for our individual countries, even if it is a gift to all from the visiting aliens. And, through the Amy Adams character, we see the impact of all this on one character and the decisions that she has to make.

So Arrival gets 9.5 out of 10 nerds. It is easily going to be one of my top 3 movies of the year and everyone should take the time to go see it in the theater.