When Neill Blomkamp came to the scene with his 2006 science fiction–a fake documentary called Alive in Joburg that was about aliens living in South Africa–his short film garnered enough attention for him to be able to launch his career as a director of feature films. With a mixture of practical effects, effective use of special effects and some tremendous storytelling, District 9 launched and became a critical and fan favorite film.

District 9 may be the best non-sequel, independent science fiction property on the big screen in the last 10 years. 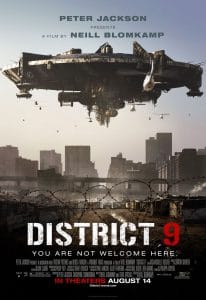 Since then, Neill Blomkamp hasn’t quite been able to capture the public’s imagination the same way he did with District 9. His next movie Elysium, about a world where the peasant class survive on a dying Earth, while the rich and elite thrive on the titular space station above the planet was a modest box office success globally (It did not make back its budget on US box office sales alone) but it was not much of a critical one, despite Matt Damon being in the title role.

Chappie was a box office disaster as it explored the ideas of artificial intelligence and what it means to be alive and human. And for someone whose name was one time rumored to be offered one of the next great sequels (Star Wars, Star Trek, Aliens), Blomkamp suddenly had ideas but not much in the way of studio support.

But we live in an era with ideas, funds and opportunity, your project can get made and put in the hands of an audience.

Oat Studios is Blomkamp’s personal project designed to take many of the ideas he had and make them, with stellar casts, crews and special effects and put them in front of an audience. In true experimental fashion, Blomkamp has funded this effort and is making revenue through some unlikely places; all of these short films are available on the Steam platform, known best for being a place where you can download video games.

Additionally, the studio has put these various short films online on YouTube where you can view them for free.

Having watched 3 of the new films, a few things stand out to me. First, the quality of these efforts is not cheated in any way. It would be easy to assume that something like this would see its special effects budget go first, but the effects in all of these short films is incredible. There will be major Hollywood funded films that have woefully lesser special effects released in theaters.

Two, the casts are excellent. Blomkamp isn’t just finding local area actors and casting them in his pet project. Dakota Fanning plays the lead character in one film and Sigourney Weaver is prominent in another.

Three, these films utilize the short story to great effect. Because they are all under 30 minutes long, they are able to escape the trap that feature films sometimes have. Blomkamp as a storyteller is able to come in and focus on one specific part and not have to be worried about telling a beginning, middle and end and then wrapping up the story. You can easily watch these three short films in 90 minutes.

Here are some mini-reviews with no-spoilers, as well as embedded links for each film from YouTube. And none of these are child appropriate, due to violence and horror.

Rakka is a science fiction story set in a world where aliens have invaded and are in process of making the planet poisonous to humanity. We see the idea of guerilla warfare through the eyes of a ragtag group of humans.

Firebase is a mixture of supernatural horror movie and war movie. The setting of Vietnam is interesting as we see the story of a supernatural force at work in the world in that location. Really interesting and compelling in places.

Zygote is a set piece, as we follow two people on the run from an monster; it isn’t a spoiler to say that the creature in this one is the scariest thing I have seen in awhile. The mix of practical and special effects to bring it to life make this one worth checking out.