I took several AP (Advanced Placement) courses in high school which granted me the opportunity to take an exam at the end of the semester or year and earn an equivalent college credit. I aced the Psychology, English/Literature, and Statistics exams. I didn’t bother with the Economics one.

Economics has never been my strong suit or interest. But I’ll say this about Scott Almes’s Harbour: It is hands down the most fun I’ve had reading and playing a market.

Harbour’s gameplay is really quite simple: You move and you perform a single action on each of your turns. You must move your pawn to “vacant” Building; a Building card in play that is not currently occupied by another pawn. This Building can be one of your own, one for sale in the center of the table, or even that of another player (though those do come with tolls!). Once there, you must execute the action displayed on that card which will permit you to: 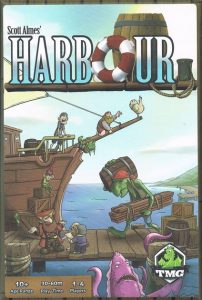 Goods gained obviously increase your available resources to purchase Buildings…but its the Market that determines the value of each of your goods (wood, stone, fish, and livestock), and the Market is a shifty beast and must be carefully watched and anticipated. Fish might be worth $5 one turn and $2 the next; throwing a wrench into your plans to purchase the building you had your eye on!

The Market shifts with each Building purchase, so you’ve got to just as closely watch your opponents’ resources and guess at their plans as you do your own. A strategic though non-optimal Building purchase might only net you 5 Victory Points instead of the 7 you were hoping for, but it might well prevent your opponent from earning 8!

Play is ended when a player buys his or her fourth Building and the person with the highest number of Victory Points is declared the Harbour Master and is encouraged to take a selfie with this special card and tag Tasty Minstrel Games and/or Scott Almes on Twitter!

The Player Boards and Building cards feature well-done and often entertaining cartoonish art; the Player Boards also benefitting from silly little notes from Dockmaster Schlibble worth reading that are often riddled with pop-culture references that the keen eye will appreciate (like King of the Hill and Monty Python & The Quest for the Holy Grail references).

The wooden components are adequate. Nothing flashy or extravagant by any means – just some stickers on painted squares, but they’re sufficient for the work that’s required of them (sliding across a piece of card stock every now and again).

PS: There’s a Watch It Played video from our friend Rodney Smith if you’d like to see Harbour in action!

Harbour:  Key to the City

As I mentioned before, there is a lot of resource management and outsmarting your opponents built

into this deceptively simple game. While I think just about anyone can successfully execute a play through and win with elementary math skills (making the 10+ rating an easy bar), the real draw in this game lies in far more advanced tactics.

Anticipating your opponents’ purchases and either adapting to the impending Market changes or preventing them entirely with purchases of your own is key. This is not a game during which you’ll want all of your metaphorical eggs (resources) in a single metaphorical basket (Building). Every purchase, whether of your own doing or that of an opponent’s, significantly impacts your immediate strategy – affecting more than just the value of your current Goods…it might well change your next Building purchase and even which vacant Building you need to visit on your very next turn!

Second to your resources are the Buildings on which you spend them. Buying a Building with a particularly attractive action might mean that your opponents visit it frequently – netting you some additional resources each time. Each Building you own might also have one or two symbols that could go a long way in helping you secure the win with benefits like reducing the cost of future Building purchases, avoiding tolls, and more.

I also played this game with my parents (see my review of Deadline) and our play styles ran the gamut.  My dad went for the more-or-less straight math approach, which meant that his strategies were routinely foiled by Market changes – though he was not unable to buy a couple Buildings to stay 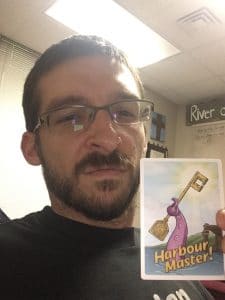 My mom played a bit more proactively and were it not for the one or two purchases I made solely to prevent her from purchasing Buildings of higher Victory Points, she might well have won!

As it was, though, my strategic sabotaging of the Market lead to my overall victory!

The low age rating for Harbour (10+) as well as its compact packaging makes it much more portable and playable with the students I work and travel with. It also has quite a bit of out-of-the-box replayability, which I appreciate.

Simple, fun, competitive, and able to be played over and over again with decent variability. Harbour hits all those notes well enough for the $15-$20 price point.

Buy yourself a copy here and tag @NerdsonEarth in your Harbour Master selfie, too!

Using the 5 Stages of Leadership to Teach Tabletop Games