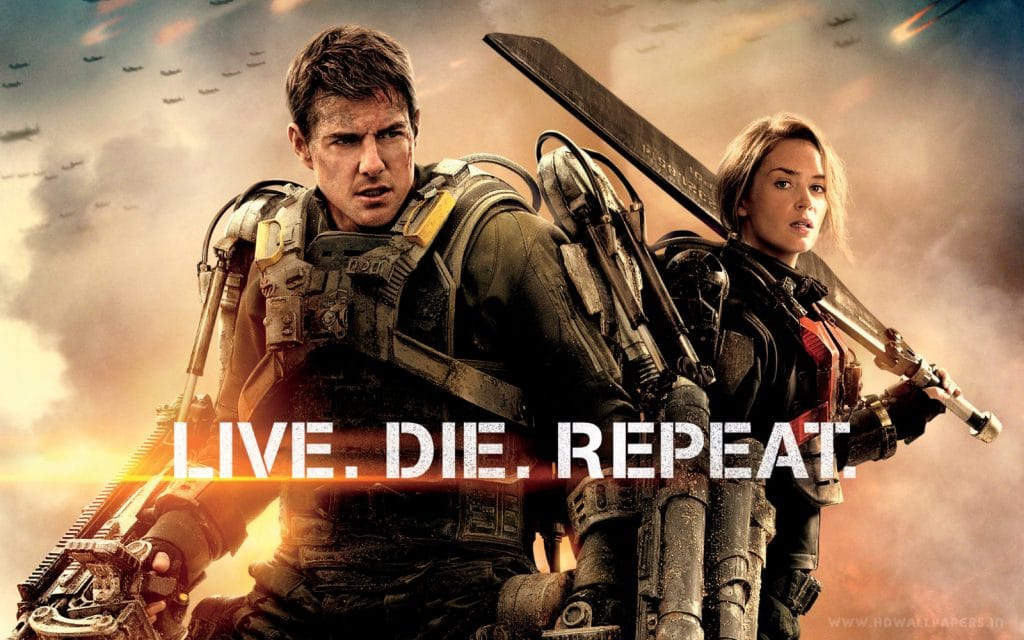 Based on the recent box office results, one movie this summer that has slowly been gaining steam is the Tom Cruise, Emily Blunt movie Edge of Tomorrow.  Based on a Japanese novel All You Need is Kill, this film is a surprisingly good story, showing the battle of humans against alien invaders.

The hook of the premise is that the main character Major William Cage is played by Tom Cruise is reliving the same day over and over again after he dies.  From a storytelling perspective, it is an interesting tool to be used by the screenplay and the director.  In essentially having the character re-live life over and over again, the film is able to move its protagonist from a swarmy, hack public relations officer to a true hero.  (And Emily Blunt is fantastic as a female warrior Sergeant Rita Vrataski.)

But as I was watching the the movie I realized: I know what this feels like.

See, I play video games.  (Admittedly, I am pretty awful at it but they seem perfectly willing to keep taking my money for the latest xbox 360 releases.)  And the device of starting at the same point over and over again is a staple of many, many games in the campaign mode.  And has been for years.

Many years ago, I lived deep in the woods and one of my sole forms of entertainment was playing games on the Xbox.  I especially remember the end scene of the game  Max Payne 2, where the only way to win was to accurately sharpshoot 4 cables to drop a large object against the main Boss.

The problem for me?

I had recently broken the right stick on my xbox controller when I threw it in a gamer’s fit of rage.  And you aimed with the right stick. Which meant that my poor, broke self had no choice but to play that same scene over and over and over, hoping that I might miraculously get lucky and make the 4 shots.

I remember the day I finally managed to pull off the feat and beat the game.  That dynamic is at play in the story of Edge of Tomorrow over and over again.

As an audience, your thought process goes “Wait, try this.”

It also makes for great storytelling.  At one point, Cage, who has lived this same moment over and over again, has to explain to Vrataski that they have only one option.  There is no other way forward.  I have been that character trying to creatively work through my campaign only to realize that the gamemakers have made only one way forward.  And towards the end of the film, as the characters have made it farther than they ever have before, you feel the same exhilaration as when you finally the battle in a game that you have been fighting for days and suddenly are into new territory.

It is an interesting and unique perspective. While there are some fair comparisons to the film Groundhog Day, Edge of Tomorrow is also something much different.  It may be what is the first pure gamer’s movie, as it uses the perspective of “over and over until victory” that so many gamers know so well.

Even with a busted right joystick.

The 3 Best Sources for Board Game Reviews and Run Throughs