The internet has not allowed the most recent installment of the Transformers saga to distract the masses from Michael Bay’s other 2014 baby: Teenage Mutant Ninja Turtles.

Most of the cinematic and nerdy blogs out there hover between nostalgic pessimism and hesitant optimism towards the reboot, with Megan Fox’s casting as April, a white guy (William Fichtner) cast as Shredder, and the lips and nostrils on the titular characters taking the lion’s share of the hissing and gnashing of teeth. Well, that is since the higher-ups righted the Alien Turtles of Indiscriminate Age fiasco.

I’m going to quickly address my two most anxiety-inducing aspects of the movie first, but only after pointing out that the anxieties are predominantly present in those that lie largely outside of the target market.

I don’t mean Michael Bay’s target market, I mean Nickelodeon’s target market. Many of the torch-toting naysayers were a part of that market once upon a time, but have to come to grips with the fact that they’re no longer the audience being catered to when it comes to their own childhood heroes.

I am one of them; particularly with the Turtles. Yes, I’ve seen friends bemoan the “deaths” of their childhood franchises – GI Joe and Transformers included – but we ought to be careful to keep from allowing our nostalgia to preclude others from discovering their own childhood heroes.

My negative cries about a time gone by may dissuade someone from knowing the Turtles at all.

I’m not saying don’t have an opinion.  I’m just suggesting that we be careful to grow the fan-bases we care about instead of hinder them.  I’ve found that I care a whole lot less about who knows my Ninja Turtles and a whole lot more that I can talk about Casey Jones with someone who wasn’t even born when I first met him.

On to woes and finger-crossing:

1.)  The additional facial features.  I won’t dwell long here as it is well-travelled ground on the interwebs, but I will share the photo that nearly motivated me to start a whitehouse.gov petition to have the visual effects team on the movie make some post-production changes on the level of Bane’s voiceover for The Dark Knight Rises.

At the top, you’ve got the new Leo with the “classic” face.

In my humble opinion: YES.

Center, you’ve got new Leo with the nostrils removed and the lips unpuckered.

Still a marked improvement over the bottommost production photo. 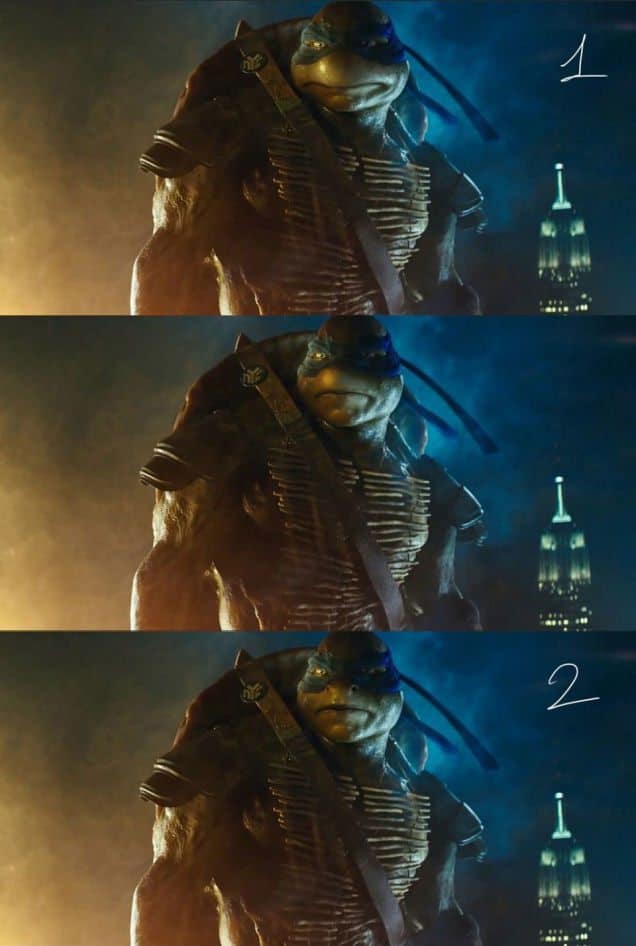 I do wonder if the narrative will have an attempt at explaining the new features in a way that would make sense given the new-ish origin story of the turtle brothers hinted at in the trailers.  We’ll find out.

2.)  Shredder, the Decepticon.  I’m just going to leave it at that.

There’s one thing that keeps me excited about this movie more than anything else, and that’s the departure from the rubber turtle suits.

Simply put:  The turtles are free.

In 2007’s TMNT, the turtles were similarly unencumbered, but realism was not also an aim in that film as it is in this one (visual realism, at least, given that its still a movie about anthropomorphic turtles).

I’m fan-girly to see the turtles fight like well-oiled, ninja-tastic machines instead of watching the turtles and the foot clan exchange blows like a turn based RPG.  Don’t get me wrong:  I still love the suit movies (well…not so much that third one, but we don’t speak of that one), but I cannot wait to see the boys unleashed!

Of course, the move towards CGI comes with dangers, too.  The fighting I hope for can easily be overdone and become incomprehensible.  *cough* Transformers *cough*

Something I initially balked at that has grown on me somewhat: The character designs.

I like the heightened sense of individuality amongst the brothers and before you shout BLASPHEMY! in the comments, hear me out:  I do think that they are over-accessorized a bit (is Donnie wearing a proton pack?). But really all that’s been done is the externalization of each turtle’s long-standing individual characteristics.

I’m strangely okay with that.

Although I will say that I found it interesting that Raphael, the turtle with the shortest temper and most likely to get into trouble with authorities, gets the do-rag bandana.  So, so easy to avoid that finger pointing.  Why wasn’t I consulted?

What are you most anxious about?  Most excited about?  Chat it up in the comments!

First Look at the Guardians of the Galaxy Movie

TMNT: Legends: Is this mobile game worth a try?