Jumanji: Welcome to the Jungle topped the Box Office shortly after its release late last year.  After turning the trouble-making board game of the 1995 film into a video game cartridge, how does it measure up to the original?  And does the video game theme work?

“No One Plays Board Games Anymore”

The setup or prelude scenes for the film take place in 1996 and show the Jumanji board game being discovered by a dad who then excitedly shows it to his teenage son, Alex.  Alex’s response:  Some shade and the offhand remark that “no one plays boardgames anymore.” 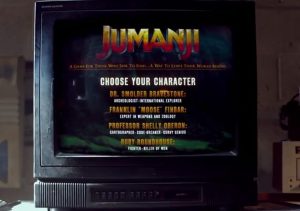 I write this section primarily for myself, because my first reaction to “no one plays boardgames anymore” was indignation and cries of “Balderdash!” and “Poppycock!” – much to the chagrin of the others in the theater who were annoyed by my outbursts and confused by the outdated slang.

But I don’t think this scene is any sort of commentary on modern day tabletop games.

The late 90s were a huge time for video games.  Most notably:  The N64 and the original Playstation had just dropped in America.  So if anything this scene is a commentary on the youth of that time and their preferences, not the modern gaming culture.  That kid was me, after all.  The moment I picked up a controller, I initiated a board game drought that would last over a decade; certainly through college.

Now, why they chose to have Jumanji transform itself into a game that looks more at home in something resembling an Atari 2600 from the 1970s is a bit beyond me.  Licensing, maybe?  Or perhaps Alex just loved him some retro consoles?  Maybe the dad trying to pawn games off onto his son wasn’t an isolated incident, and he’d passed along the console that he loved when he was a teen?

Regardless, at least there is an explanation for one thing:  Why the video game stays old school for 21 years. 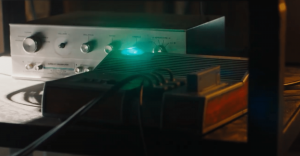 Literally no time passes between the 1995 film and this sequel.  The final shot of Jumanji Classic is the board game lying half exposed in the sand of a beach.  The first scene of Welcome to the Jungle is Alex’s dad retrieving the game from said beach.

Alex gets sucked into the video game in 1996, but the remaining cast (those who would become Dwayne Johnson, Jack Black, Kevin Hart, and Karen Gillan) aren’t sucked into the game until 2017.  Why didn’t it transform itself into a newer generation console game?  Because the game had already begun!  Just like in the original Jumanji, once the game is started it has to be finished.  That’s why the Shepherds had to recruit Sarah Whittle in the first movie and why the game kept its form during the 21 years it took for four more teens to select a character.

Using video game mechanics in place of the dice and space-by-space progression of a board game was a neat idea.  The movie played well with video game features like respawning, scripted NPCs, character skills, and cutscenes – leaning on them for several gags.

Sticking with the retro game and console did limit their bucket o’ gags a bit, though.  The pool of tropes from games from the 1990s is tiny compared to that of today’s video games.  It would have been funny to have the nerd (Alex Wolff) do some in-game modding, or have the crew encounter a glitch that threatens to permanently impede their progress without a hard reset (and what would that do to them?).

They did, however, leverage one more modern element to video games (or at least one that became much more prevalent): the easter egg.  During Alex’s two decade stint locked in the game, he holed up in Alan Parrish’s hut.  A neat homage to Robin Williams that, given its placement in-game, qualifies it as an easter egg for the Jumanji game the teens are playing as well as the movie.  Meta!

The plot itself only pays passing attention to the video game theme with mention of levels and boss fights.  I didn’t really feel as if the plot was that great, either. 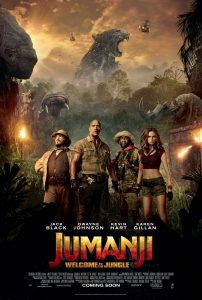 descendant of his?  Its unclear (or at least I missed it if it was made clear).  He steals a jewel and they have to reclaim and replace it.  Its there as a structure, for sure, but the main focus is the character growth of the teens as they’re all basically inverted by their avatars:

This is where the movie does well…but not perfect (more on that below).  They each walk a mile in another’s shoes and learn a bit about themselves and each other and are higher functioning teens (socially speaking) when they emerge.

The cast was well-selected overall.  Jack Black kills it as the young, vain teenage girl (Madison Iseman) selects him as her avatar (being mislead by the name “Shelley” which, as it turns out, was short for Sheldon).  His dialogue elicited the lion’s share of the laughs from me.  The writers had a field day with the idea of a teenage girl in an overweight male’s body.

The football star (Ser’Darius Blain) gets stuck in Kevin Hart’s character whose weaknesses include Strength and Speed.  Hart’s comedic timing and delivery was on point throughout.  No complaints here at all.

Karen Gillan does a pretty great job of portraying the mannerisms of the nerdy outcast (Morgan Turner) that selects her as her avatar…but I did feel like there was a weird shift in her character.  Outside the game, Bethany (the outcast) is intelligent and bold, but when transported inside the game she seems to lose a lot of both and instead becomes a physical comedy engine.  I guess that once she gets more accustomed to her abilities in-game she redeems herself from some of that, but not completely and when/if it happens, it happens too late in my opinion.

And then there’s Dwayne “The Rock” Johnson who does okay, but never made me feel like he’s the only muscle-y action-y guy that could have portrayed his role.  I have felt that about him previously, but not in Welcome to the Jungle.

Jumanji: Welcome to the Jungle made me laugh more than a few times, but I don’t think it has the staying power of the original.  It is a middling movie; worth a Redbox but probably not a purchase.  An interesting new spin on a classic that definitely falls short of its predecessor.

Why You Should Watch Scrubs, A Supremely Nerdy Show

To Retcon, or Not to Retcon: Revising Turns in RPGs