As Episode 112 passed its Lavallee Cliffhanger™, the boys were screaming “What is that f@#$ing thing?!” and “We cannot fight that.”

What has got the GCP so shaken?  Its called a peryton, and the boys’ fears are not unwarranted.  Find out why in Episode 113 – Shadow Lancing.

After successfully navigating the Dark Passage, the party is welcomed back to the other side of the valley by a bloodthirsty group of flying predators. 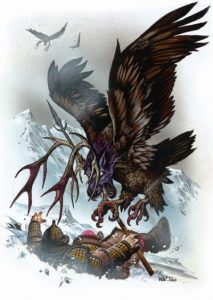