About 15 years ago, after being out of reading comics for many years, I wanted to get back into them. A good friend of mine who was a comic aficionado gave me his recommendations of some trades to get my interest up in a wide variety of comics. His choices were excellent, and gave me a great running start at getting back into comics.

I wish to do the same with this post for you nerds. Below I submit five trade paperback series that are incredibly well written and also offer a wide variety of genres (because not all comics are superheroes with unlimited powers!) to help comic neophytes find their niche of comics.

A note for the readers: artwork is secondary to me in comics. I am more interested in the story – for example, two of my favorite webcomics are XKCD and Order of the Stick, both of which feature minimalistic artwork. Second note is that these books tend to have more adult themes and concepts in them. People die and people occasionally have sex. So I would screen these before giving them to any children. 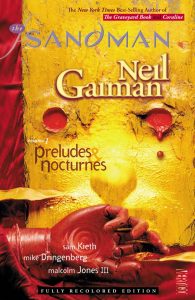 It’s Neil Gaiman. Enough said for many of you who may have read (or watched) American Gods. Sandman was really what put Gaiman on the tongues of many comic readers.

In this series, Gaiman anthropomorphizes metaphysical entities into human form. There are the seven Endless – Dream (the main character), Destiny, Death, Desire, Despair, Delirium, and Destruction. While originally intended as a horror comic, it shifted more to a historical/mythological comic over its development.

The plot starts with Dream having been captured and held prisoner for 70 years by an occult ritual. He escapes in the modern day and subsequently goes about trying to restore his kingdom. The story wanders through his kingdom, known as the Dreaming, and our world, called “the waking world,” with multiple different arcs and tangents throughout the series. One arc has Dream visiting Hell to retrieve an item. He duels Lucifer there and sets up Lucifer quitting hell and coming to Earth to live.

PS: A separate comic (and later TV show) is based on Lucifer’s time on Earth. It’s called…Lucifer.

Whilst the story is what enraptured me to Sandman, the artwork is breathtaking as well. Throughout the series, Gaiman is paired with many different artists, but all of them do an amazing job of visualizing Gaiman’s vision. This series of graphic novels has been considered by many to be one of the best graphic novels ever written.

Who might enjoy Sandman? Anyone interested in fantasy, mythology or metaphysics. The interactions of the different Endless to each other and how they interact with the waking world is truly fun to read. Gaiman incorporates many different mythos into his books – Japanese, Hindu, Greek, Norse, and Christian are all present in different stories regarding the Endless. 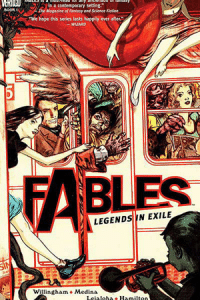 This concept for Fables is that every fable/fairy tale ever told creates a world where those creatures are truly alive and immortal (as long as people read/believe in the story). Their worlds were slowly being conquered by the Adversary, and the Fables fled to modern day Earth to live in hiding in downtown New York in a area called Fabletown.

There are several different protagonists throughout the series, one of the most prominent being the Big Bad Wolf, known as Bigby, who is Fabletown’s sheriff. Willingham does a great job creating modern stories/dramas for characters that are “public domain figures,” and creating interactions for them with other fairy tale characters. Willingham wrote the series and had many different artists to help show his vision. Some of the art I enjoyed, others I was not fond of, but the story was captivating regardless of who was artist.

Who might enjoy Fables? If you like the TV shows Grimm or Once Upon a Time, or the book series Percy Jackson, this series might be good for you. A fantatiscal look at immortal fairy tale creatures living with us mortals in modern day Earth. 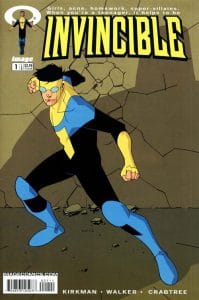 While you might know Kirkman from Walking Dead comics, Invincible was his first real big hit. It is the story of a teenager named Mark Grayson, who finds out that he is the son of a superhero (Image’s version of Superman named Omni-Man). He finds out he has inherited his father’s powers of superhuman strength, endurance and ability to fly.

This 15-year series starts with him learning how to use his newfound powers and coping with being a teenager with superpowers. Kirkman was known to throw twists into the “tropes of the genre” as he liked to put it, and he does it in a great fashion throughout this series.

Who might enjoy Invincible? People who like superhero stories but want a little more angst and possibly even more twists than are present in your typical superhero comic. 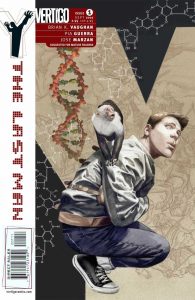 Y has been covered before here on NoE, but I wanted to bring it back up because I really cannot talk about great alternative trades without mentioning Y!

This comic takes place on a modern day earth where every mammal with a Y chromosome (that’s all males) dies simultaneously with the exception of the amateur escape artist Yorick Brown and his Capuchin monkey, Ampersand.  Yorick travels the world trying to figure out why he survived when all other males died. It is a fascinating look at a post-apocalyptic world from a different view of one sex surviving, but having to deal with the world decimated by the loss of the other half.

Who might enjoy Y the Last Man? To be honest, almost anyone. While the series starts with a post-apocalyptic event, everything in this series afterwards could be in any standard novel. There is drama, action, love, betrayal, and more throughout the story. But this story would especially be enjoyed by those who like post-apocalyptic stories, or people who like science fiction. 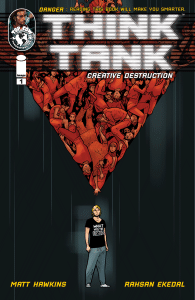 Remember how I mentioned that art was not the key to me? This is a prime example. It is done entirely in black and white.  Rahsan Ekedal, the artist, does great work depicting the vision of Hawkins, but the art is not what captures your attention.

David Loren is a super genius who goes to work for DARPA.  He develops a conscience and tries to leave, but the General running DARPA has a different plan.

I really enjoyed the demonstrations of our future (and even present day) science and the potential it has for good/evil. Technology is advancing at such a fast pace and the implications of what we can and cannot do are not being studied. Hawkins tries to show this in the comic and get us thinking/talking about how far we want to go. Of particular note are the last couple pages of every comic where Hawkins provides links to the potential science in the “science fiction” comics he is writing.

Who might enjoy Think Tank? Any science buff, but also any person concerned with the rate at which our scientific discoveries might be outpacing our moralistic code. And any conspiracy theorists out there will get some great ideas for new conspiracies based on the technology shown in these comics!

So whether you’re a seasoned comic vet looking for something new and different or a newbie comic reader hoping to find something appealing and finite (all of these titles have concluded!) in an alien medium bursting at the seams with on-goings and confusing crossovers, there’s something in one or more of these titles for you!