“Did you know Elvis had a twin brother?”

I love that line. It’s no “Yes, father. I shall become a bat,” and it certainly can’t stand up to “Gives me the jim-jams,” but I love it all the same.

“Did you know Elvis had a twin brother?”

That line is from Y: The Last Man, but even without me saying so, you probably knew Brian K. Vaughan wrote it. It’s a completely random, out-of-nowhere bit of trivia that he deftly (and improbably) manages to invest with tremendous narrative significance.

In this case, it’s a commentary both on destiny and rings, which represent not only unbreakable bonds but also the inevitably cyclical nature–you know what? I don’t have time to talk about the recurring themes of Y: The Last Man. I will say that the story ends in the same way it began; with a joke about Elvis, a man in a straitjacket, and a monkey.

It’s also the best ending to any comic series I’ve ever read (needless to say, spoilers follow. You have been warned).

If you haven’t read Y, here’s the elevator pitch: a mysterious event kills every male mammal on the planet, except for a street magician named Yorick and his pet monkey. Hilarity ensues. 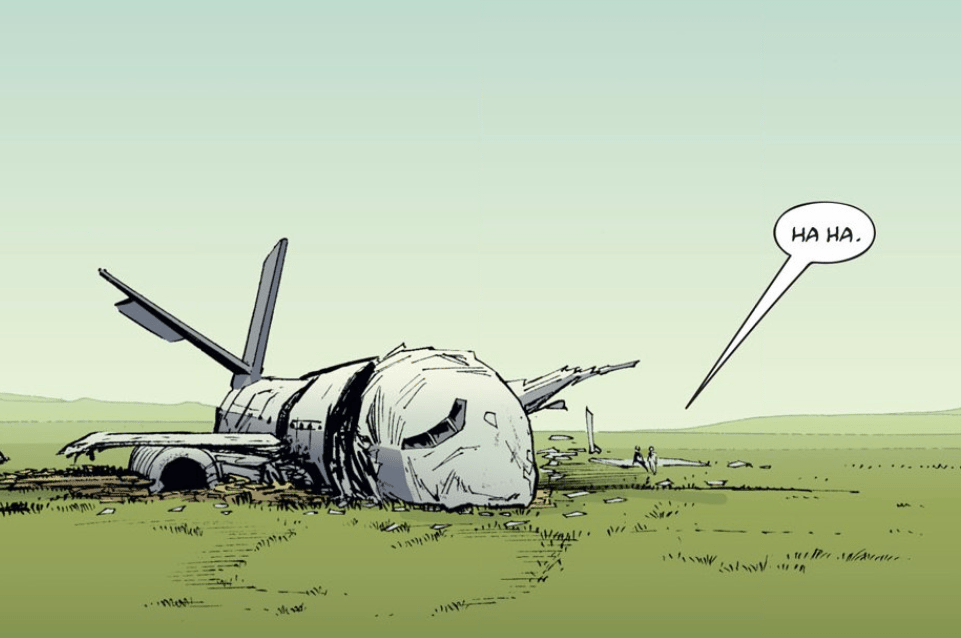 This issue is set sixty years later, after humanity has been saved through the magic of cloning, to find that Yorick has become a lonely old man, surrounded by well-behaved monkeys and bitter memories. That’s when he comes face to face with his younger self:

The bittersweet conversation that follows is the perfect end note for a uniformly excellent story, the comic equivalent of the final chord from “A Day In The Life.” And this, in spite, or perhaps because of, how tremendously, spectacularly sad the issue is, melancholy on a geologic scale.

In a series that opens with the extermination of half the planet and flirts with death and despair in every subsequent issue, it’s surprising that there’s still room to feel…anything. But in this issue, we see snapshots of personal devastation: failed marriages… 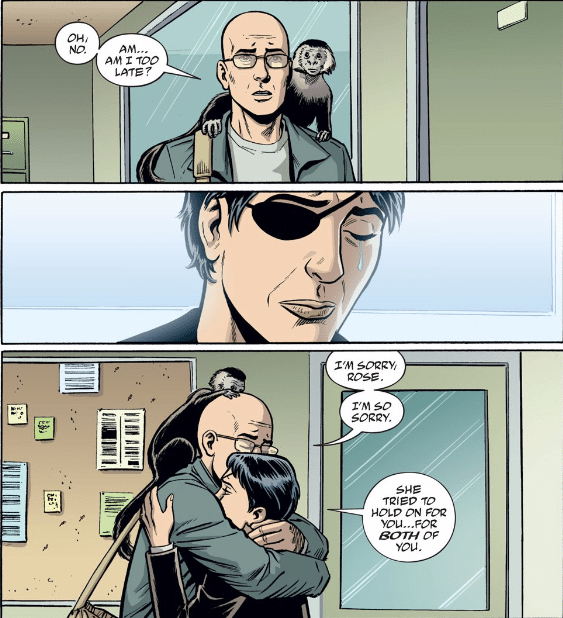 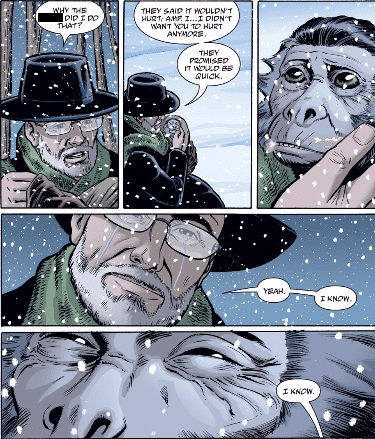 And I love it. So much. Not because it’s happy (because again, it’s not), but because it’s true. The truth isn’t always pretty, but it is always beautiful.

This issue has given me something I’ve needed every time I read it. When I first got to the end of Y, I was close to Yorick the 17th’s age–22, or close to it. I was getting an English degree I was afraid I was never going to use, about to go into a world I didn’t feel prepared to handle. I felt like I had wasted my life in classrooms when there was so much of the world that I could see. 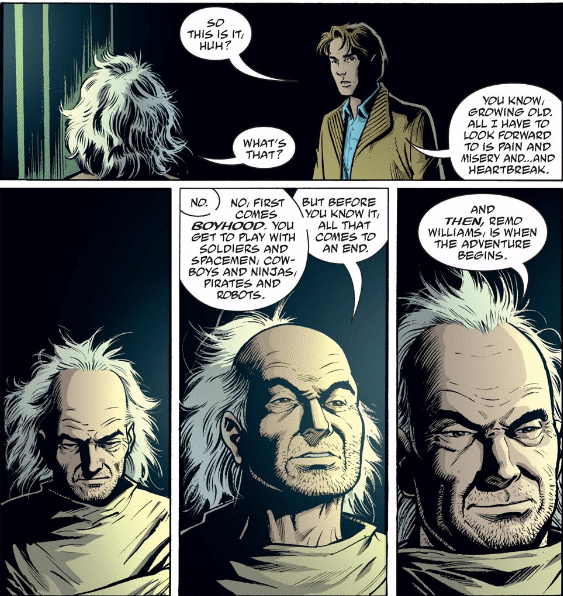 But, of course, you can’t stay a boy forever. At some point, you have to grow up, and that’s really what Y is about: transitioning from boyhood to manhood. Y is, at its core, a juvenile concept. Every dude believes they’re the most important man in the world, and in Y, it’s literally true.

Then you grow up.

That was me at 26, a newly published author and small business owner with plans I couldn’t have imagined as few as six months ago. I’d gone places and done things I never anticipated. I’d been happier, sadder, and angrier in the last four years than in the twenty-two before it. And when I read Y: The Last Man #60, I needed something different than I did when I was 22. I needed somebody to tell me exactly how much the next few years are going to hurt. I needed a frank reminder that however bad I’ve been hurt in the past, I’m going to be hurt so much worse soon–maybe tomorrow, maybe in ten years, but its coming. 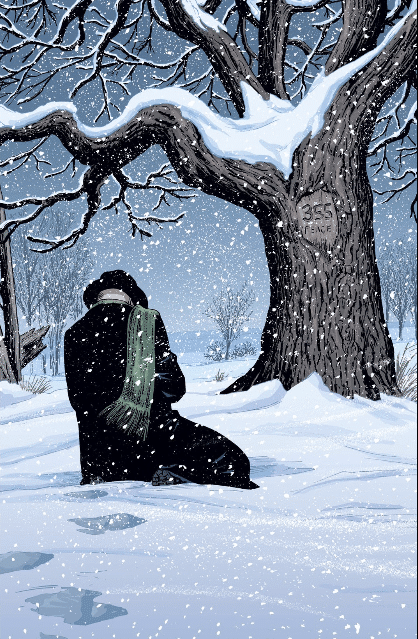 I called this comic bittersweet. “Bittersweet” doesn’t seem to cover it does it? Arugula is bittersweet. Casablanca is bittersweet. This is sixty years of heartbreak condensed into a handful of pages. Nothing about seeing Yorick (Yorick the clown, the sincere joker, the loyal friend) as an old man, weak and furious, is sweet. It’s a tragedy.

Except that all that pain, that misery, that grief, none of that is the end of the story.

That’s the thing I need somebody to tell me now, and I know I’m not the only one: no matter how bad it gets, you can always slip out to the next adventure, as long as you have a little bit of magic. 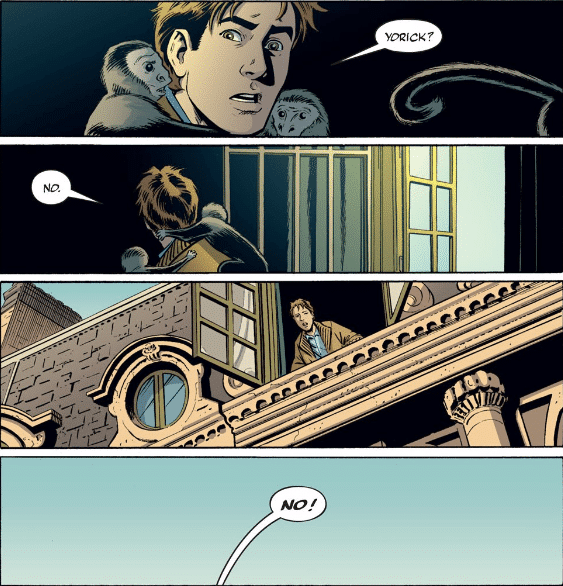 This issue might have started in a filthy, dark cell, but it ends with fresh air, sunlight, and most importantly, freedom.

This issue isn’t an ending. It’s a beginning. 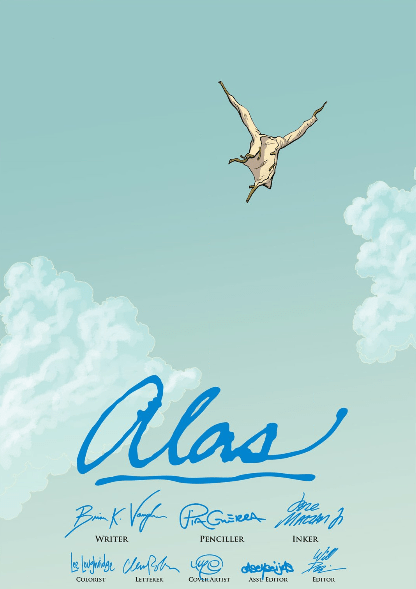