Every nerd thinks they know best when it comes to the things they love best.  This is precisely why discussions break out all over the internet all the time about things like which Star Trek captain is the best and who would win in a fight between hero X and hero Y.

Entire Youtube channels are devoted to such showdowns.  Heck, we even hosted a Superhero Smackdown of our own (just search our site for Who Wins It?).

These passion-fuelled debates are entertaining, but rarely go anywhere.  Everything is too subjective and the discussions tend to fall into one of two categories:

However, some students at the University of Leicester in the UK spent the better part of seven years applying scientific principles to a bevy of superheroes (though notably and understandably not all because that is a Herculean task, so if your favorite hero is conspicuously absent from the list of those studied please don’t take it personally) and have reached several conclusions.

Perhaps most notably:  That Superman could be the best superhero of all.

And the worst?  Batman.

They reached their conclusions about those two heroes plus the likes of Wolverine, Thor, Flash, Mystique, and Blackbolt among a few others by tackling their special abilities through the lenses of physics and biology and making parallels when necessary for calculation and comparison’s sake (i.e. Superman to a solar cell and Mystique to a cuddle fish).

Each paper (25 in all) weighs in at 2-3 pages for quick consumption (assuming you can track with the math and terminology well enough) and are available entirely free here (scroll down to the bottom of that page for the links) if you are so inclined to read them (as I was).

For the Cliffsnotes version that covers each of the twelve heroes surveyed, click here.

Of course even though there is real science involved here, the arguments and discussion will continue to rage on more or less unabated. I sent this information to a friend of mine who swears Batman would wipe the floor with Superman and he still stands by that citing that

a) Batman would totally survive a glide (the study says he totally would not) and, of course,
b) Superman can be bested with a rock. 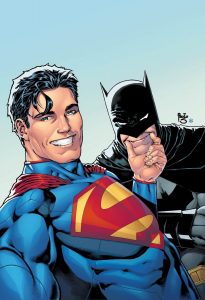 All the while totally forgetting (I guess?) that most Superman fans will gladly give you kryptonite because it is one of the two things he’s canonically weak against (the other being magic). The list of things that could kill Batman is way, way longer – and includes gravity according to this study, so *sticks out tongue.*

See?  I’m already keeping the discussion alive.  And I think that’s totally fine!  In fact, I’d like to point out that the study says that Superman is the “best equipped” super hero which leaves who is actually the best hero open for more debate that might bring things like morals and character into the discussion’s mix.

Those two things – morals and character – are what drew the battle lines in Marvel’s Captain America: Civil War.  It wasn’t about who could beat up who, it was about who stood for or against what.  Science will likely never settle such matters.

But Superman would totally kill Batman, guys.  Because science.

No Spandex Here! Our Top 7 Alternative Takes on Super-heroism