So, let me be the first to say, Image Comics’ book The Few isn’t going to be the title that you should pick-up if you think that the world is crouching towards its inevitable destruction, and America especially in that equation. But Sean Lewis and Hayden Sherman have created a compelling opening issue that does the work of creating a world where that has and is happening. It is an artistic examination as we are dropped quickly into the story from a variety of viewpoints, which move to a climax of story telling that unpacks more than it would first appear. 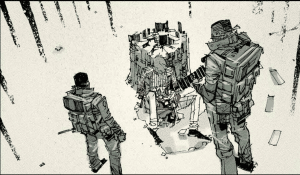 First off, it is hard to do dystopian well any more. From The Walking Dead to The Hunger Games forward, it feels like nearly every creator has shared their take about the world ending and what that will look like. Image has evoked Emily St. John Mandel’s Station Eleven in some of their promotional materials for The Few. While I would disagree overall so far with the tone, The Few does have some of the sense of disconnection of the world that Station Eleven has. But the take is much darker than that.

Even by the issue’s end, we don’t know much about this world. Set in the geographical place of America, we basically have a character with a baby, discovered by 2 brothers. The rest of the issue is giving the backstory of the woman and the child and how they came to be there. 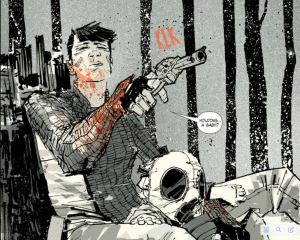 Part of what makes the story work is Sherman’s unique art style. The color palette relies on white and black images, with some browns and sephia tones but highlighted with a muted red, that is used for blood and other effects. It is very hard to describe and certainly unique to see. It reminds me of some of the work of Riley Rossmo, especially the earliest Proof work as well as Jeff Lemire’s Sweet Tooth, though that may be due as much to the wilderness and snow setting as anything.

From the storytelling standpoint, the end of the comic has a swerve that definitely caught me off-guard. I am not entirely sure that it works but it will be interesting to see how the story progresses moving forward into future issues. For a first issue, it does the work of building an interesting enough world for me to want to see what happens next.

The Few #1 by Image Comics hits comic shops this week!