What has happened to me? Is there a darkness in my soul? Have I become so jaded with the current state of Marvel comics that I can only see cracked earth where others see gardens ready to bloom?

Case in point: I don’t think the current Marvel Civil War 2 crossover was very good. Civil War 2 was about Ulysses, a new Inhuman precog, who had the power to calculate the outcome of future events with a high degree of accuracy. This predictive power divides the Marvel heroes on how best to capitalise on this information, with Captain Marvel leading the charge to profile future crimes and attacks before they occur, and Iron Man adopting the position that the punishment cannot come before the crime. Think of the plot of Minority Report and you get the gist.

First, Marvel did their first Civil War crossover event only a few years ago, which resulting in folks getting sick of superheroes fighting each other all the time. But Marvel really loves to have their heroes fight each other, so they did it again. Yawn.

Second, the execution was felt even worse this time around. Common complaints were as follows: 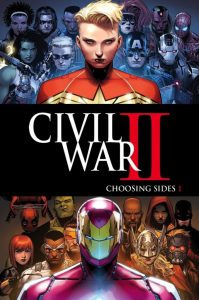 So those are very good reasons why one might think Civil War 2 wasn’t very good. But I can be generous. What the heck, I’ll grade up from ‘wasn’t very good’ and call it ‘pretty good.’

But pretty good isn’t even good enough! These reviewers of the preview event on Amazon must have seen what my dark soul couldn’t, which is that Marvel’s Civil War 2 is a 5-star triumph.

“First time buying and reading a comic book,” begins a third reviewer on Amazon. “I haven’t finished reading it but I am enjoying it. The drawing looks great even though in some parts it looks wonky,” they finished before leaving a 5-star rating.

Wow. Civil War 2….must be really cool. What am I not seeing? Why wasn’t I compelled to CAP LOCKS and exclaimation points?!!!!

Keep in mind that the average rating came out to a 3, so many people are as hardened and blasé as I am, and also had a hard time thinking of Civil War 2 as anything more than pretty good. But iff you are able to appreciate the beauty and majesty all around you every minute of the day, it looks like Civil War 2 might be a Marvel crossover you’ll enjoy 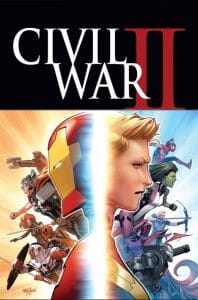 Alas, Civil War 2 wasn’t very good in my opinion. But I love that their were some Amazon reviewers out there who deeply enjoyed. Good for them and I certainly don’t want to spoil their fun.

Lesson learned? Us individuals have different opinions when it comes to comic books. I give Civil War 2 one-and-a-half-stars, while another comic fan gives it a full 5 stars. That’s cool.

And if history has taught us anything, it is that Marvel will try it again with another big Universe-wide crossover immediately after this one. Maybe that next one will the the 5-star triumph I’m looking for.

As for you, it’s probably best for you to read it for yourself and make up your own mind. Don’t take mine, nor the Amazon reviewers, word for it. It’s trickling into the Marvel Unlimited app and the collected trade is coming soon from *ahem* Amazon.

Iron Man is the Most Believable of all the Superheroes

Iron Man is the Most Believable of all the Superheroes