This week, Marvel launches its most daring movie gamble yet: they are putting a Doctor Strange movie in theaters. And, you have heard this from me before, in regards to Guardians of the Galaxy and Ant-Man, in that I have been near certain each of those would be the first misstep in the Marvel Cinematic Universe.

This is always based on two theories:

With that in mind, there are some great places where you can quickly get on-board with Doctor Strange and one of the best is a 5 issues mini-series that was collected into one graphic novel: Doctor Strange: The Oath.

Here are some of the reasons that this title makes a great jumping on point: 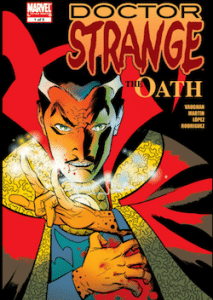 It gives his origin without being an origin story. In all seriousness, we need to stop feeling like every single hero needs a detailed, annotated biography. Doctor Strange’s story is pretty simple but it also can be explained and then move on, which is what this book does.

This book has some stellar creators involved. One of the things that you hear over and over again from comic creators is that all of them have a Doctor Strange story that they want to tell. (Or maybe they were all just pushing to get a screenplay credit.) In writer Brian K. Vaughan, you have a master storyteller at the top of his game with a character whose backstory is wide enough that he can go to town. And he does in fantastic ways. Equally, you have Marcos Martin as artist who does a phenomenal job. He has a the ability to do the mundane parts of the story well and in an interesting manner, as well as the mystic, magical parts that have to be a part of any Doctor Strange story.

It uses a key part of the Doctor Strange story to tell an important tale. Doctor Stephen Strange was a medical doctor, an excellent one and had put much of his faith in medicine and science. When an accident destroys his ability to perform surgery, he goes out in search of another path. Between Strange’s choices and some others in the story who have to make similar decisions, we get the core tension of a Doctor Strange book: science or magic. Or how do we justify the mix of both. 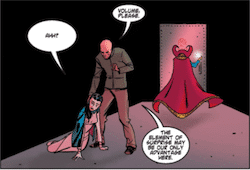 The story has some great side characters. Wong is Doctor Strange’s ever faithful sidekick and has a key role in the story and some great scenes focusing on him and Strange’s relationship, which really helps elevate it past a bad stereotype it was created under. The Night Nurse plays a key role as well, almost serving as the de facto voice of the audience when we don’t quite believe all the magic mumbo jumbo.

There is a powerful moral choice that comes down to the end of the story. Moralistic endings in comic books are hard to pull off. They too easily become completely one-sided tha 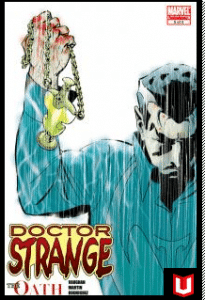 t it is obvious what the “correct” answer is and the audience pulls for that solution. This book has a moral quandary that as a reader, I could make a compelling argument for each side and feel good about it.  To top it all off, Vaughan and Martin do it in such a way that I feel like either answer would have been heroic. And that is really difficult to pull off.

So, if you are looking for a quick Doctor Strange story to prime the pump before you head off into the theater this weekend, Doctor Strange: The Oath is an excellent 5 chapter option that gets to the heart of the character, introduces some moral quandaries and isn’t another retelling of an origin story. It is definitely worth checking out. You can find the collected trade here on Amazon or it is currently available to Marvel Unlimited subscribers.