One of the recent Halloween traditions that I have discovered for myself is that I love to take a few moments and listen to the Jonathan Coulton monster songs. 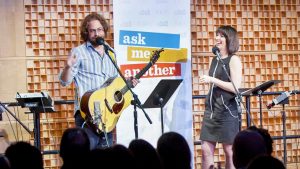 It is hard to say where and how Jonathan Coulton became famous. He is currently the house musician for NPR’s Ask Me Another, where he writes jingles and games around songs as part of the quiz show.

He wrote the amazing recaps in front of the new episodes of the television show Brain Dead this summer, which were a delight. He has been a touring musician and songwriter, most notable for his “Thing a Week” project, where he wrote lots of songs in a year, releasing them as albums and a boxed set.

In general, Jonathan Coulton is a very talented, cool nerd who writes thoughtful songs on a variety of subjects. You can learn more about him here on his web site.

One of the things that I like about Jonathan Coulton’s songs is that he is able to take on a perspective different than the ones we expect in situations to sometimes hilarious and sometimes thoughtful results. Here are a few of his monster based songs that I think every nerd should know. 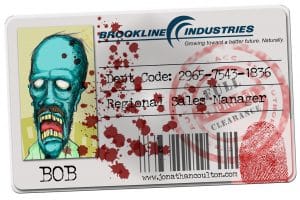 “Re: Your Brains” has a simple set-up: imagine Bob from the office down the hall, who has showed up to a business meeting to discuss your future. The catch? Bob is now a zombie. By meshing business meeting jargon, discussing some of the tropes of zombie movies and laying out a compromise that will make everyone happy, Coulton tells a pretty humorous story. Live, this song is great because Coulton has the crowd sing the chorus “All we want to do is eat your brains”, often chastising them if it is too intelligible. You can check out this song here on YouTube.

“Skullcrusher Mountain” is the story of a diabolically evil mad scientist who just wants to convince the audience of the song, a kidnapped woman, that he loves her. And as he lays out his case, he does it in a beautifully diabolically evil mad scientist way, reminding her that he is way too smart for her, and that he is annoyed by the screaming from when he gives the half-pony, half monkey monster as a gift. It is a very catchy tune told from a wildly different perspective. You can check out a video with the song here on YouTube.

In a much different tone, but based around an object of love and a monster, the song “I Crush Everything” is heartbreaking. You may think that there is no way you will find yourself pulling for a giant sea squid, and yet the haunting self loathing of the song pulls you in. When all you want to do is find love and all you seem to be capable of is crushing everything, it is a dangerous trap. Bonus points for the lyrics that point out the dolphins are big phonies, which I think secretly I always knew. An animated version of the song can be found here on YouTube. 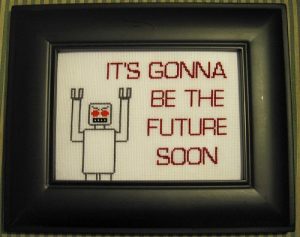 And, finally, in what can only be called the anthem of middle school nerds everywhere, the song “The Future Soon” is told from the perspective of the awkward, geeky kid in the class who just wants Laura to notice him. And when it goes wrong, he imagines what the future will be like. Only, this guy is headed for world domination with a robot army. Again, by taking a trope that has been played out over and over again in literature, film and television, Coulton is twists it with this new perspective of that the wounds of today shape us into what we will become, sometimes with frightening results. I love this song for its lighthearted delivery but its lyrics do pack a punch. You can see Coulton perform the song here on YouTube.

Jonathan Coulton has many more nerd credits, including having written the closing song to the game Portal, just to name one. Regardless, he is a fantastic writer, artist, and performer. Much of his back catalog is available on iTunes and on Spotify. If you are looking for some new and different music about monsters, these 4 songs are definite candidates!

The Force 40, Part 1: A Bracket of the Absolute Best Star Wars Music