Every once in a while there is something so weird, quirky, and nerdy that it somehow manages to make it through the network system and get on the air; it makes a nerd give pause and wonder how it happened. 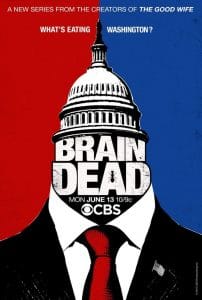 This summer, CBS began airing one great example of this, the television series BrainDead. This unique vehicle is a cross between Invasion of the Body Snatchers and the Good Wife. And The Good Wife comparison comes naturally, as it was created by the Michelle and Robert King, who also created that show.

Honestly, I can only think that CBS took a chance on this 13 episode season as a “Thank you” for that show, as BrainDead is so bizarre that I can’t imagine it being made conventionally. Some CBS executive likely simple said “Uh, okay. Here is 10 million for the season; hopefully we can air it.”

I stumbled into the show, drawn largely by the lead actress, Mary Elizabeth Winstead; you put this show with her performance in 10 Cloverfield Lane and she is basically crushing 2016. But the whole cast is stellar, giving some great performances, as senators, their aides, some of them having been infected and some of them not.

And I have to recommend the amazing show recaps that Jonathan Coulton is doing, where he musically sings the viewer through what happened in the previous episode. They are great and his nerd sensibilities work fantastically for this show and for that purpose.

In the midst of the story, there is some biting political satire; the show does the bold decision to say “Yes, everyone in politics is crazy.” while giving the absurdist reason of ant-like alien invaders who came from a meteorite that crashed in Siberia.

The invaders take over by crawling into their victim’s ear.

And while CBS had the show made and is airing it, the promotion budget appears to have been nothing. A quick scan of Twitter shows critics who have discovered it love it and are trying to boost its signal, but the ratings aren’t good at all.

Likely, this show will be a quirky one and done television show but I am grateful that it was made. It gives networks a chance to realize that genre bending, nerdy television could potentially be a worthwhile investment, even if they only plan one season. While everyone wants the massive 10 year hit, there should be a place for stories like BrainDead as well.

The season finale aired last night on CBS and the whole season will quickly become available on Amazon Prime. I definitely recommend checking out the show. If you aren’t hooked by episode 3, you can safely walk away but the first two episodes have a lot of exposition to set-up and then after that, the show and story really get moving.