Pathfinder is a game of fantasy adventure, where you have the chance to battle monstrous dragons and terrible villains. It’s a game that can provide endless hours of fun as your characters rise in levels, becoming more powerful and earning greater and greater treasures.

So far in this series of articles, we have looked at learning the rules of the game, the various supplement books that provide new options for players and gamemasters, and the world of Golarion, the campaign setting that you can have your characters live and adventure in. However, we have yet to look at the meat of the game—the thrilling adventures that your characters take part in, the ones with those aforementioned dragons and villains.

As I’ve mentioned before, Pathfinder can handle a large number of styles, and gamemasters have a lot of options for the types of adventures they wish to put their players’ characters through. Many GMs choose to design their own adventures, and this is a fine idea if you have the time to devote to it. The advantage to making your own adventures is that you can tailor them specifically to your group’s needs and desires.

However, not everyone has the time or desire to design their own adventures. In this case, there are a wealth of premade adventures waiting for you to unleash on your groups. For example, Paizo produces a series of “Pathfinder Modules”. These provide self-contained adventures of various styles and for various levels. They are particularly useful if you’re not running a full-length campaign. For example, if your group can only get together for a few sessions, you can probably find a good one-off adventure to run.

If you are running a full-length campaign (one that takes characters from 1st level all the way to the upper pinnacles of the game), you can pick and choose from these Modules as you like and string them together.

Alternatively, you can turn to an Adventure Path.

Pathfinder Adventure Path is a monthly 98-page softcover book. Each volume provides one part of an adventure path, as well as a number of background articles to help you run the adventure path. Each adventure path is six parts long, and has a connecting theme and a story that links all the parts into one epic campaign. All of them start at 1st level, and while they don’t all end at exactly the same level, they generally end at levels in the mid to high teens.

To date, there have been 109 volumes of Pathfinder Adventure Path, comprising 18 full adventure paths (plus the beginning instalment of the 19th one), making this a great time to pick one up and run it, as you have a large variety to choose from. You have a good chance of finding one that fits your needs and interests. 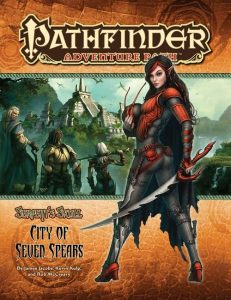 All the adventure paths are set in the Pathfinder Campaign Setting world of Golarion (although with many, it will take only minimal effort to convert them for use with a different setting). Several of the early ones were set in the region of the world called Varisia, but as the world has been developed beyond that region, other adventure paths have been set in various other areas of the world.

Some of the adventure paths, such as “Curse of the Crimson Throne”, “Council of Thieves”, and “Hell’s Rebels” focus on just a small area, rarely venturing much beyond a single home city.

Other adventure paths take the PCs to many different areas of the world. “Second Darkness” takes characters from Varisia to the elven nation of Kyonin and to the Darklands, which are the underground warrens of the drow. “Jade Regent” has the PCs travel from Varisia, across the Crown of the World (the North Pole), to Minkai in the far-off continent of Tian-Xia. “Reign of Winter” takes the characters to several areas of Golarion before taking them to completely different planets. 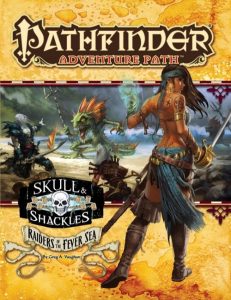 The different adventure paths provide you with different styles and genres of adventures, too. “Skull & Shackles” is a pirate-themed adventure path, set on the high seas. If you’re looking for a bit of horror chills, there’s “Carrion Crown” or the currently releasing “Strange Aeons”, which is heavily influenced by the stories of H. P. Lovecraft.

“Mummy’s Mask” is set in the Egyptian-inspired Osirion, and takes characters into undead-infested tombs, while “Serpent’s Skull” offers a bit of Indiana Jones-inspired adventure. “Legacy of Fire” is inspired heavily by the stories of One Thousand and One Nights.

“Wrath of the Righteous” is for people looking to play holy crusaders fighting back the demonic hordes of the Abyss. This adventure path uses rules from Mythic Adventures and is the highest-level adventure path released so far, taking characters all the way to 20th level with a full 10 mythic tiers.

“Kingmaker” is one of the most popular adventure paths. In it, the PCs explore the wilderness of the Stolen Lands and set about creating their own kingdom, which they must then defend against invasion. 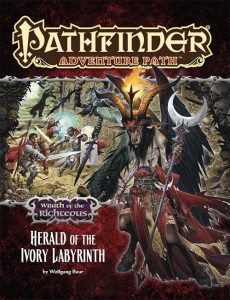 Some adventure paths, such as “Rise of the Runelords”, “Shattered Star”, and “Giantslayer” (best known from the Glass Cannon Podcast) offer very “traditional” style adventures against common monsters like goblins, orcs, and giants. Others venture a bit more into the unusual or outright bizarre, such as “Iron Gods”, which makes use of science fiction concepts like spaceships and androids, or “Hell’s Vengeance”, where the players get to play the villains and fight against the forces of good for a change.

The great thing about running an adventure path is that it allows you, as gamemaster, to present a unified campaign to your players, while cutting down significantly on the preparation work you need to do. Note that you will likely still need to do a bit of work. Any published adventure, whether an Adventure Path or a Module, needs to be written for the widest possible audience. You may need to make minor modifications in order to meet the specific needs of your group. This might mean making some of the encounters simpler if your players are not very experienced, or the opposite if your group finds them too easy.

I also suggest that, while it is certainly fun to purchase and read adventure path volumes as they’re released, you should wait until an entire adventure path is available before starting to run it. This way, you have a full understanding of the adventure path, and can more easily make any modifications that might be necessary. 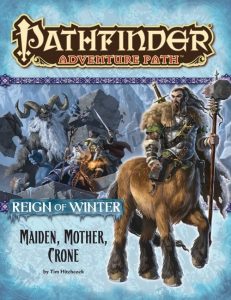 And so this concludes our overview of the Pathfinder Roleplaying Game. In this series of articles, I have only been able to touch the surface of all that is available, but hopefully, it has given you a taste of what is out there. From here, the next step is reading some of the books and actually getting involved in a game, either by joining an existing one or starting your own group.

If you’re looking for more specific information about Pathfinder products, I have detailed reviews of many of the adventure paths and other books on my own site. A quick web search will find many other sites offering reviews and breakdowns. You can also flip through them in your local store.

Pathfinder is truly a great game, and I hope you have lots of fun playing it!

Global Frequency by Warren Ellis Needs To Be A TV Show