In most roleplaying games, there is one player who is responsible for overseeing and refereeing the game, and presenting the scenarios the other players take part in. This particular role can be known by different names in different games, but in Pathfinder, it is known as the gamemaster, or GM for short.

The gamemaster has a very important role—important enough that the game can’t proceed without a gamemaster. However, a GM has an even greater learning curve than the other players. A gamemaster not only needs a solid grasp of the game rules, but also needs to be a moderator, storyteller, creator, and maybe even an instructor.

It’s not an easy role to fill, and it’s not one that everyone wants to have. Many people are quite content to just be players and to never need to take on the GM’s position. However, if you’re putting together a group of players, someone will need to step up and be the gamemaster, and that person is going to have to put in some extra work. 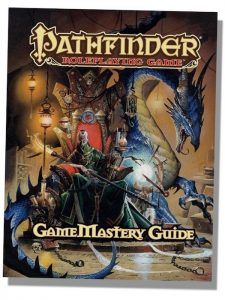 The last third, approximately, of the Pathfinder Core Rulebook looks at the gamemaster’s side of the game, but unfortunately, like the rest of the book, the focus is on rules and rules applications, with only limited practical advice on the actual art of gamemastering.

In all likelihood, if you’re new to gamemastering, you’ll want some additional help to get going.

If you’ve started with the Beginner Box, the Game Master’s Guide in that set provides some excellent instruction, along with a sample adventure, to help get you started.

Once you’ve moved on to the full Pathfinder game, the GameMastery Guide is a great resource to hone your skills with. This 300+ page book contains advice, instruction, sample NPCs (non-player characters—the characters controlled by the GM that the player characters encounter during the game), and more.

The GameMastery Guide looks at the multiple sides to being a gamemaster, from the social side of dealing with the other players in the real world, to creating adventures and campaigns, to adjudicating the numerous rules of the game.

On the social side, it talks about things like style and tone of play, how to be a good host, and what to do to prepare your gaming space. There’s advice for how to deal with difficult players or sensitive topics, how to introduce new players to the game, and how to make sure everyone gets along.

On the rules side, there’s advice on designing NPCs and awarding treasure to the PCs. There are rules for creating towns and cities, as well as special rules for things like chases and natural disasters.

The GameMastery Guide also contains tables—lots and lots of tables. Gamemasters will find that they frequently need to improvise during a game (as it’s impossible to have planned for every possibility in advance), and these tables provide useful lists of things to help in this regard. Simply pick what your want from the tables or roll randomly on them.

There are tables of menu items for taverns and restaurants, locations that PCs might come across in a city, shop names, and city decorations. There’s a list of sample ghost ships and shipwrecks for seafaring adventures, along with a list of interesting flotsam. There are lists of both mundane and exotic room characteristics for dungeons, as well as portal descriptions for travelling to other planes of existence. There are also many random monster tables based on environment and location to help you select monsters. There’s even a huge vocabulary list of words that you can use to help make your descriptions more colourful and interesting.

Finally, the GameMastery Guide contains an NPC Gallery with the statistics for various kinds of people the PCs might meet in their journeys. These include guards, street thugs, entertainers, cultists, and more.

If you’ve decided to take on the role of gamemaster for your group, there is one other book you’ll need: the Bestiary. This book contains stats for over 300 monsters of various different power levels that you can include in your games. It also contains the rules for creating your own monsters.

Strictly speaking, the only books you need to be a Pathfinder GM are the Core Rulebook and Bestiary. However, just like being a player, there are other books available to you as well. There are several other Bestiaries (from Bestiary 2 to Bestiary 5), and they provide even more monsters for your games—enough that you’ll be able to continually surprise your players with new and interesting foes.

The NPC Codex provides sample NPCs for every character class in the Core Rulebook at every level from 1st to 20th. It’s great to use for when your PCs encounter other adventuring parties, or for brigands, town guards, or anyone else your characters meet that you need stats for.

The Monster Codex is similar to the NPC Codex, except that it provides monster NPCs with class levels. This way, not every goblin or orc your character meet is the same, and some may surprise them with their abilities and powers.

Being a gamemaster can be a challenging job. It’s a lot more work intensive than just being a player. You need to spend time outside of the game preparing for the game, and you have to be alert and on your toes during the game.

However, it can also be a very rewarding experience if you’re willing to put in the effort. The books I’ve mentioned will help you in facilitating many hours of fun and memorable experiences for everyone in your group, and all can be purchased via the links above.