There can be a lot of things to keep track of in a roleplaying game like Pathfinder. The party’s wizard has cast a bull’s strength spell on your character, increasing her strength score temporarily. At the same time, the party’s bard is using the inspire courage ability to boost everyone’s combat prowess. Meanwhile, a magical effect from the orc sorcerer has left your character shaken and the shaman’s bodyguard is grappling her.

It’s now your turn in the initiative order, and you’re desperately trying to remember all the bonuses and penalties to your rolls. 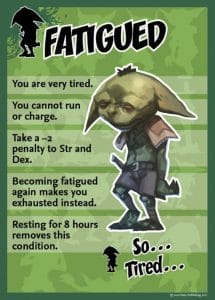 All kinds of effects (spells, monster abilities, and more) in Pathfinder can result in characters gaining various “conditions”, such as shaken or grappled. These conditions affect the characters’ abilities to do various activities—often meaning penalties to certain die rolls. Shaken, for example, applies a -2 penalty on all attack rolls.

Conversely, various effects can “buff” your character, providing greater abilities to do things. This generally results in bonuses to die rolls, such as the bard’s inspire courage ability, which gives a +1 bonus to attack and damage rolls and a +1 bonus to Will saves against fear.

When your character is suffering or benefiting from just one such effect, it’s not difficult to keep track of. It’s actually pretty easy to remember a single +1 bonus to attack each round, for instance. However, if your character has multiple buffs and conditions, such as in the opening example above, it can be a lot more difficult to remember which ones apply to which rolls, which ones stack with each other, which ones cancel each other out, and so on.

At high levels, the number of effects active at any one time can be quite large and the problem can get even worse. Sometimes, you might completely forget that an effect is active at all. But there are things that can help. The Pathfinder Cards line (not to be confused with the Pathfinder Adventure Card Game) has a couple decks designed precisely to help with this problem.

The Condition Cards provide you with an easy way to track the conditions that characters in your game might be suffering from. The deck contains 52 double-sided cards. Each provides a description of two conditions, one on each side (these are generally related conditions, such as sickened being pared with its more severe version, nauseated). Whenever a character gains a condition, you can simply hand the player the appropriate card. There are also multiples of each card, so no need to worry if multiple characters gain the same condition. 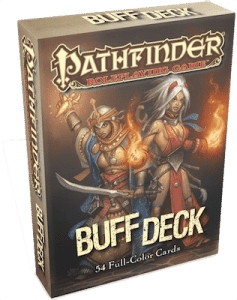 Similarly, the Buff Deck is another set of 52 cards that cover that various effects that boost character abilities. While not as comprehensive as the Condition Cards (there are just too many spells in the game to cover them all), the deck includes the most common spells and special abilities that characters might use or benefit from, such as inspire courage, bless, bull’s strength, invisibility, and more. The cards are not double-sided, unfortunately, and there is only one of each, but there are several blank cards that you can fill out yourself for additional effects that come up in your games.

With these cards in front of you while you play, it becomes much easier to remember what things are currently affecting your character. You still have to do all the adding up yourself, but the cards make it clear what type of modifier each one is (such as a morale bonus or competence bonus) and what rolls are affected. You’re much less likely to accidentally leave one out.

I get extensive use out of both the Condition Cards and Buff Deck in my games. They are a huge time saver, something my players have been very grateful for. (And if you don’t want to buy the “official” cards, it’s pretty easy to make your own.) However, there are also many other many other decks in the Pathfinder Cards line that can enhance your game or make aspects of the game easier. Chase Cards, for example, give you a way to easily run chases (something the Core Rules don’t cover), while the Critical Hit Deck gives the option of making critical hits a little more colourful than just bonus damage. 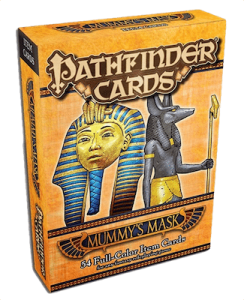 There are several decks of Face Cards which provide portraits of characters and monsters from adventure paths (such as the Reign of Winter Face Cards) and other sources (such as the Pathfinder Society Face Cards). These give GMs a quick and easy way to show an NPC’s picture without having to flip through the book every time a player asks, “What does that person look like again?”

Item Cards (like the Mummy’s Mask Item Cards) do a similar thing for treasure that the PCs find during adventures. When players need to remember what a particular unique magic item does, they can just look it up on its associated card rather than flip through various books to find its description.

As with everything Pathfinder, there are a lot of options to choose from, but you’re not likely to need them all. In addition to the Condition Cards and Buff Deck, I make use of the Chase Cards and the Deluxe Harrow Deck (a set of 54 large-sized tarot-like cards specific to the Golarion setting) in my own games.

What you choose in yours is dependent on your own group’s needs.