For over a week now, the Netflix and Marvel series Luke Cage has been the talk of the nerd internet. It has proven so popular that there is much discussion that the series may have been responsible for a service outage Netflix experienced on the second day of its release. And as nerds everywhere have binged the show, it has been interesting to see and hear people’s take. 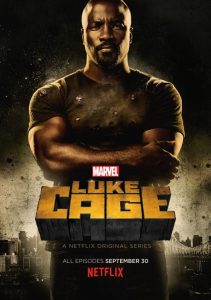 First, Luke Cage is decidedly African-American at its core. As we have talked about here before on at Nerds on Earth, Cage is a product of an era that has some trouble adjusting to the modern world. Over time, Cage has become something more, even in the hands of white writers in the comics.

The Netflix series was led by Cheo Hodari Coker, who had experience in other television shows like Southland and Ray Donovan. He made bold choices to put together a story that is centered in Harlem, an area of New York rich with cultural significance to the African American community. The story of season one of Luke Cage is centered in that area and unapologetically so.

From the cast, the story, the background, the side players and discussion, the show is Marvel’s first attempt to make a significant connection with the African American community directly. Which isn’t to say that such a decision isolates anyone else because…

Second, Luke Cage is a story about the origins of a superhero. In episode 4, we get a very dark origin story and it is shot and told in such a way, that I might make the argument that one of the new powers Luke Cage has is that he ages slowly. If you told the average viewer that the show was set in 1970 and gave them just that episode, it would be a hard argument to make that it wasn’t. The character of Pops becomes Cage’s Uncle Ben, and he has to decide to do something significant with this power he has. 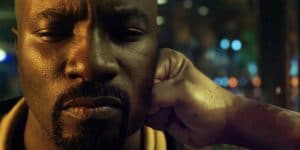 Quite simply, this isn’t a show for little kids. Real violence has real consequences. Even as we explore the underground world of crime in Harlem, punches aren’t pulled and we see history that tells the story of how these people got to be so off track and yet be convinced of their moral standing. It is a fascinating take and it doesn’t necessarily provide sympathy for the bad guys and girls as much as it does provide context. And, that choice makes the show the darkest Netflix show in terms of impact on an overall community that we have seen yet.

Fourth, it is impossible to talk about Luke Cage without talking about the musical choices it makes. Part of the show, at least early on, is set in a club, which allows for some amazing live performances, so interesting background music at key scenes and gives it a flavor that other shows have lacked. 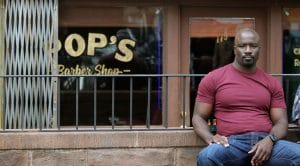 And, to be certain, it isn’t gimmicky. It works well for this show, though I do need someone to explain to me what a full band is doing playing a show in the middle of the day for Cottonmouth; even a “thanks for letting us try out” line would help. The work of music in helping create scene, tone and circumstances is great. And the choice to use a variety of music, from soul, to hip-hop, to dance music gives it a wider palette that gives it depth. The show deserves significant kudos for how it has used music, which is something Marvel has never quite nailed, even in its full length movie releases.

Finally, Luke Cage was cast extremely well. Mike Coulter embodies Luke Cage in a way that we could only hope for; he was good in Jessica Jones but he is stellar in this. The surrounding cast excels all the way around. The casting director deserves credit for populating this series with a diversity of ages in its characters; from the old guys in the barber shop to the young hoods Cage fights to Mariah, over and over again we see choices that are made that make Harlem feel more real and authentic.

Luke Cage isn’t perfect. It will feel like an echo that has been made of every Marvel Netflix collaboration so far, but the show loses its way a bit in the middle of the season. You could easily tighten the show up by 2-3 episodes and make it a more compelling show. As Marvel continues to make these series, with The Iron Fist and The Defenders coming next, I hope they will be more ambitious in the story that they are telling in a season or shorten the season accordingly. Trimming the fat just makes the part of these show that excel just thrive that much more.

Luke Cage gets 9 out of 10 Nerds. He is the Hero for Hire that we all deserve!