It’s been a long time since we had a core entry in the Gears of War franchise. While about five years have passed on Earth, it seems that a quarter of a century has gone by on the planet Serra, and the peace earned by Marcus Fenix’s squad and their light mass bombs and technological mcguffins has come to a close. While the Locust seem to no longer be an issue, the human government has dropped back into their totalitarian ways from before E-day, using robotic enforcers known as Shepherds to keep any aberrant settlers in line. This dystopian space future is a fitting backdrop to start the adventures of the next generation of the Fenix family: James Dominic (JD) Fenix.

Gears of War 4: My, How The Times Have Changed

Gears of War 4 will be a comforting reminder of simpler times for anybody who was a fan of the original trilogy. I know many folks didn’t care for Judgement, the last entry in the series, but I never played it at all, so my last memories of the franchise are happy ones.

After fighting the endless Locust hordes through three games, losing friends and family along the way, it was satisfying to watch Marcus finally take off the do-rag, his mission complete and humanity safe. It’s been long enough now, though, that it was finally time to go back and see how everybody has been doing since then.

Not very well, as it turns out.

The campaign opens with a sort of remembrance ceremony of the history of violence experienced by humanity on Serra, with flashback sequences to the Pendulum Wars, E-day, and the end of the Locust War serving as your tutorial missions.

While it does appear that everything is peaceful, you cut over to start playing as JD, the true protagonist of the game, raiding a government outpost that is under construction by autonomous machines. It quickly becomes apparent that not everybody is part of the new peace, with outsider settlements getting by with ramshackle buildings and technology pilfered from government facilities.

The first few missions dealing with this conflict feel somewhat different than the older games, with your group fighting against slow moving, well organized robots instead of the quick, vicious enemies of yesteryear. This setup is pushed aside soon enough, as it seems like the Locust (or “the Swarm”, which could not be mistaken for anything else but the Locust) have returned, snatching up humans for some ungodly horrors to be bestowed upon them.

Gears of War 4: The Campaign

The campaign in Gears of War 4 lasts a good 8 to 10 hours, depending on how much sightseeing you do, and while there are some decidedly quiet moments, it’s nothing if not action packed. Some of the set pieces they’ve come up with for this outing are exhilarating. One moment you’re fighting a gigantic airplane from the back of beefy motorcycles, the next you’re holding onto thick steel elevator cables flying up the side of a canyon, dodging debris and shooting falling enemies with your trusty sidearm. Oh, and there’s a part where you get to pilot a giant robot with a gargantuan weaponized staple gun, so that’s awesome.

My only real complaint about the campaign is the ending. Gameplay wise, it makes sense as a stopping point, since you get to easily power through waves of formerly challenging foes with your new giant suit, and then there’s what was obviously a final boss fight, multiple stages and everything. However, I didn’t realize it at the time. I was paying more attention to the story, as the ridiculous mythos of Gears has always been my favorite part, and after the big bad falls, you’re treated to a cutscene that seems to lead into the next mission, but then the credits roll. Game over.

The last thing Marcus even says is more or less “this isn’t over”, except that’s exactly when it is over. It’s been obvious from when they originally announced this game that they would be making sequels, but it always leave a sour taste in my mouth when a story seems to end in the middle of a chapter like that. It’s Pirates of the Caribbean 2 all over again, and nobody wants that.

Even with the ending, I still greatly enjoyed playing through the campaign, and I can’t wait to try it again in co-op, probably on a harder difficulty. Before that, however, I supposed we should talk about the other two modes: competitive multiplayer and Horde mode.

I’ve never been a fan of the multiplayer in Gears. It always just seemed like the winner was whoever could time their shotgun blast better, and this one doesn’t feel any different to me. The tactical cover based action fighting against the AI is what makes playing Gears feel so good, and that just doesn’t translate over to fighting against real people.

Finally, we have Horde mode. People may play Call of Duty multiplayer all year until the next installment comes out, but Horde is what keeps people logging into Gears for months on end. I haven’t gotten to play much of this mode yet, as the standard version of the game hasn’t released yet, and I’m the only one of my friends stupid enough to buy the expensive versions. What I have 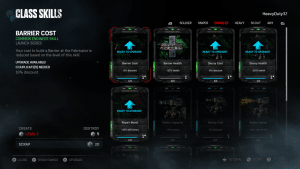 played, though, takes me right back to how much I enjoyed the old Horde modes.

The difficulty of the waves ramps up quickly, with the robotic Shepherds and the Swarm coming at you from both sides. Before starting a match, you can equip bonuses represented as cards, granting any number of buffs such as increased health or ammo capacity, decreasing the cost of fortifications you build, or more esoteric options such as increasing the distance from which you can collect energy from fallen enemies to fuel your fabricator where you buy weapons and fortifications. They’ve added a very light class system into Horde mode, which mostly just changes what sort of bonuses you can equip going in, with some bonuses being tied to a specific class and others being universal.

Playing with randos, I was only able to make it through the first 5 waves of the Horde, but that was enough to leave me itching to get back in there. As an added bonus, I should say that if you are like me and always worry about what platform your friends are getting a game on, the co-op and Horde modes in Gears of War 4 support cross play between Xbox One and PC users, so you should be able to enjoy all the fun parts of the game with your friends no matter how they like to play.

Now get out there and chainsaw those gross monsters. For liberty!

Looking to the Future: My Favorites from the Show Floor of…

Square Enix Returns to Form with I Am Setsuna, for Better or…