Genndy Tartakovsky was responsible (wholly or in part) for many of my favorite shows as a child including such gems as Dexter’s Laboratory, The Powerpuff Girls (yes, I watched and loved this show proudly), and Samurai Jack.  He had a style all of his own and I swallowed whole most of the work he put his hands to.

So while I was purchasing the most recent  #1 issues for review from Comixology, I couldn’t help but drop Tartakovsky’s Cage! #1 into the cart as well.  As it turns out, Tartakovsky is helming a four issue miniseries and it simply bleeds with his style and flair.

An Introduction to Tartakovsky’s Fun Take on Luke Cage 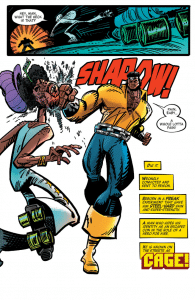 establishing the era in which this comic is set, but more on that shortly) who, in Tartakovsky style, are called The Bank Rollers.

They are promptly dispatched by the steely fist of Luke Cage in his old school bluejeans, yellow shirt and boots, silver headband, and chain belt (again hinting at the comic’s place in continuity, but even more on that later).

After “beatin’ up on those skatin’ turkeys,” he finds himself late for an 8pm dinner date with Misty Knight…only she’s not there at 8:10pm when he arrives and is still a no show come 8:45pm.

He stomps over to the precinct to find it completely deserted save for a single man in lockup who Cage intimidates into spilling the beans on where all the cops have gone. Turns out superheroes have been disappearing all over town and the whole police force left to investigate and hasn’t been seen since.

Cage then heads to Misty’s apartment only to be met by an optic blast by Cyclops who is looking for Jean Grey. When Cage tries to explain that Jean moved out months ago, Cyclops thinks he’s lying and blasts him out the window before Wolverine and Nightcrawler can explain (with a little help from an editorial box that firmly roots this run immediately after X-Men #137 in which Jean as Dark Phoenix was destroyed) that Jean is gone.

Lying in the indentation he’s made in the asphalt from his fall, Cage is met by The X, Chemistro, Mace, Black Mariah, and Mr. Fish who explain that they’re here to take advantage of the lack of heroes and dispatch Cage once and for all.  After a short tussle, Cage beats feet away from the five baddies only to be one-shot KO’d by one of two mysterious figures.  We’re left with editorial boxes exclaiming,

What on earth is powerful enough to knock out Cage?!

Why Should You Care?

If you’ve ever loved any of Tartakovsky’s animated shows, the visuals of this book will make for a fun trip down memory lane. Everything is comically exaggerated from physique to motion and its just plain fun to run your eyes over it all.

I don’t believe this book will ever be a “serious” Cage book, but its not because Tartakovsky can’t do serious or edgy (see: Samurai Jack which is this wicked blend of humor and intensity). The book made me laugh in a few places, but most notably so when the lone convict in the empty precinct told Cage he’d tell him where all the cops had gone if Cage would get him “on the free side of [the] iron curtain” (referring to the bars of his cell).  That lead to the page below which is solid gold as far as I’m concerned. 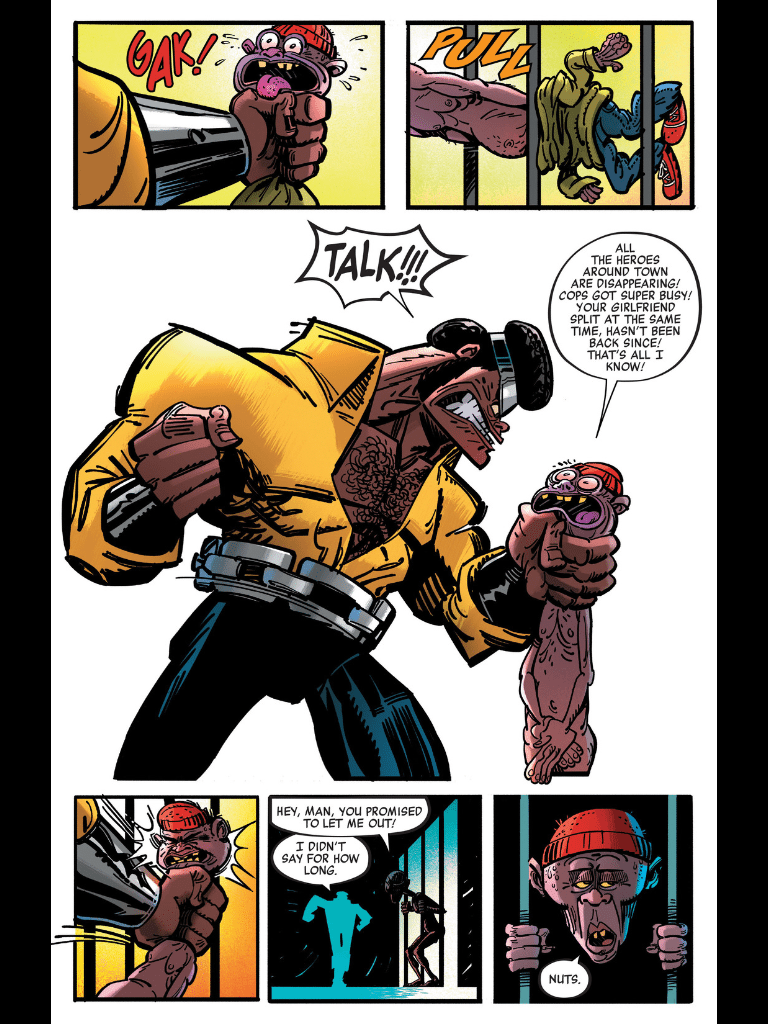 I literally have no idea where the next issue will take the short four part series, but if it proves as entertaining as this first issue, I’m in for it and more.  Cage! probably won’t be anyone’s definitive run for the character, but if you’re a fan of Tartakovsky’s work, it’ll hit the spot. No doubt about it.

BirthMoviesDeath.com held a short but informative interview with Tartakovsky which you can read here that asks questions like Why Cage?, Why now?, and What can we expect? Check it out and pick up the issue yourself from Comixology or your local comic shop!

The Surprising Importance of Technology in the Comic Book Industry