Introduction to the Comic  I jumped into Trinity #1 completely blind; not knowing much about the 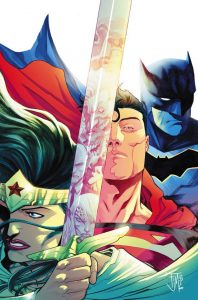 recent history of the DC comic universe. I had a few questions for Ross, our most prolific DC reader, and he told me that:

Once I had that sorted out, the scene was simple:

Lois Lane invited Wonder Woman and Batman to dinner (unbeknownst to Superman) and the dialogue is as awkward as you’d expect of a scene like this. The meeting is necessary according to Diana, but neither she nor Batman are quick to pick up where things left off with their now-dead Superman.

Why Should You Care?  For one: The art is stellar in this book. There are three pages in particular whose panels are framed in each of the titular heroes’ symbols that are just really, really cool. And several of the panels are presented in this low detail, almost abstract-looking wash while others are super detailed – it is visually dynamic and I totally dug that.

And I think there is a compelling hook in this book, one I couldn’t say better than Batman himself: 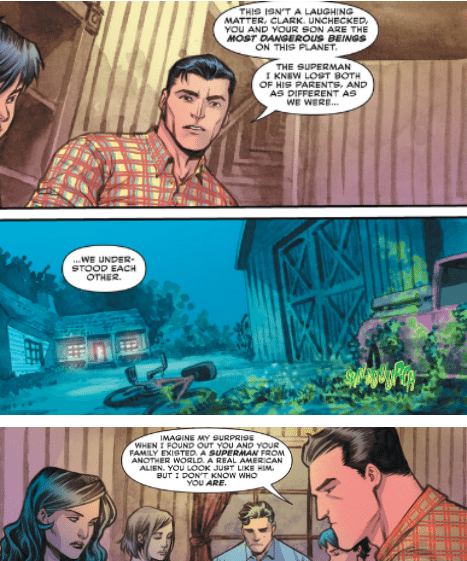 Batman, ever the thinker, has legitimate concerns here and boldly voices them. The Trinity is not yet The Trinity in Trinity #1. Sure, the pieces are all there, but much is missing. I’m curious to see how they are once again forged into the bonded trio. At this point their relationship is not a given, and I like that approach. I mean, sure, the odds are extremely good that we’ll get The Trinity we’re accustomed to, but…

What will it take?

Seven to Eternity by Rick Remender and Jerome Opeña 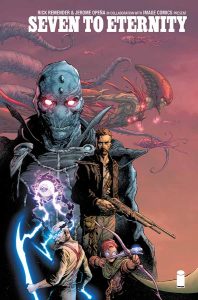 for the ensuing narrative:

The Osidis family was cast out of society for refusing to bend their knees to The God of Whispers, or the Mud King. Zebediah Osidis would not listen to the Mud King’s offers. They retreated into the wilderness and away from the war; earning them the reputation of cowards, even though it was bravery and resolution that lead their fellow Mosaks to run them off.

Zebediah yet lives, and with a growing family on a farmstead. But the Mud King sniffs him out and sends a messenger who demands that Zebediah listens to the Mud King’s offer.

A fight ensues with spectacularly drawn and colored magic:

His son, Adam, races into the burning house to retrieve a weapon, but emerges on to the battlefield too late – only to watch his father die.

Now Adam sets his sights on the Mud King. In order to protect his family, he determines he must either kill the God of Whispers…or hear his offer. He’s not sure he can accomplish the former, and the latter would violate his father’s creed and his family’s honor.

This first issue ends with Adam standing at the foot of the God of Whispers’ throne as the Mud King asks, “Will you hear my offer?”

Why Should You Care?  So I’ll be honest with you: There is a lot of potential wrapped up in the setting of Seven to Eternity, but I didn’t feel like this first issue did a great job of setting the hook in me.

I think Remender did a fantastic job of establishing the tension within Adam. There’s a great line right before Adam enters the presence of the Mud King:

What do you do when the thing you hate most holds your only hope?

That is strong writing! 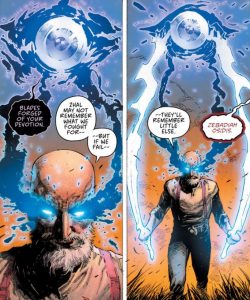 Adam as a character is compelling, no doubt, and the world he traverses on the way to the Mud King is fantastic in the fantasy sense of the word. There are all manner of beasts on display and magic in evidence in the Zhal (the world in which its set), but I wasn’t grabbed by it like I was by Remender’s Low and I can’t quite put a finger on why.

If you read issue #1 and loved it, tell me what sold you on pursuing it further in the comments below!  I’d love to know what I missed or overlooked!

Glass Cannon Podcast: Episode 71 – That Was Then, This Is Trunau

The Surprising Importance of Technology in the Comic Book Industry