A few weeks back I was editing the Weekly Nerd Chat in which Jason and Clave built their ideal Blue and Gold Teams.  While Jason was combing over the original Blue Team’s members and saying who was and wasn’t on the table for the upcoming iterations, he mentioned Psylocke with regards to Rick Remender’s excellent run on Uncanny X-Force. 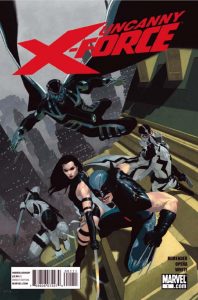 It was at this time that I googled “nerds on earth Remender X-Force” to pull up the article we’d written covering the run.

Google gave me nothing back.

Frustrated, I went right into the WordPress guts and searched our content for the post.  It was after this third query that I realized we had somehow – and to our great shame – managed to neglect covering a run in the comics that many of our staff gush about regularly.

So first: Apologies. You guys and gals deserve better than this from us. If our website required a paid subscription, we’d offer a refund. And in all honesty, we were just as stunned at this oversight as you probably are. We couldn’t believe it!

Remender’s run on Uncanny X-Force ran just over two years and brought us 37 amazing issues (35 regular issues and two .1 issues) where Wolverine, Psylocke, Archangel, Fantomex, Deadpool. Deathlok, and (later on) Age of Apocalypse Nightcrawler  and E.V.A. (Fantomex’s external nervous system that serves as a ship and later on takes on humanoid form – its complicated) operate under the radar and off the books.  They’re very much a black-ops team; they do the dirtiest of work and they have no backup.

The series breaks down into five sagas:

I made the joke in Slack yesterday that I had what felt like a monumental task ahead of me trying to pitch Remender’s run in less than 5000 words.  Heck, the notes I jotted down as I reread the issues over the last couple of weeks number in the hundreds of words!

So I thought I’d do a Top 5 Best Things About Remender’s Uncanny X-Force to keep it short and hit the brightest of highlights.

The run in its entirety is available on Marvel Unlimited or in two volumes from Amazon (Volume 1 here and Volume 2 here).  As far as we’re concerned, this is required reading for Marvel comic fans, so get to it!