Rick Remender is one of the top creators in comics today. His work for Marvel especially deserves all the praise it collects, especially his iconic run on Uncanny X-Force, where he and artist Jerome Opena told a magnificent tale about a darker, grittier X-team.

But Remender has also created some excellent creator owned titles and is now focusing exclusively on that side of the comic profession. Towards the current top of hid creator-owned list is the series Deadly Class.

Comics You Should Know: Deadly Class 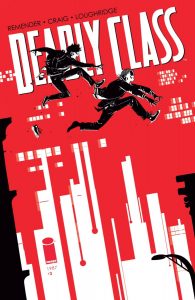 Deadly Class recently was big news at Comic-Con because it was announced that the Russo Brothers (directors of Captain America: Civil War, among other things) had optioned the series for television. With the story that Remender has told and Russo Brothers guiding the ship, folks have high hopes. (Note: for every announced television series, something like 30% make it past the pilot stage, so nothing is a guarantee.)

Deadly Class is some ways uses the conventional hero’s journey myth that Joseph Campbell popularized. Marcus Lopez is a teenager that has wound up on the street for a variety of reasons and winds up being recruited into an elite high school…of assassins. (Think Harry Potter with more violence and gore.)

In some ways, that set-up makes the series seem pretty traditional; there are definite beats and parts of the story that you see coming but even that part is really well done. For instance, Marcus has the issue of not coming from a family that has long been a part of this world. He is, in fact, nameless, serving to put him at the bottom of the high school culture, even in this much different world.

Part of the story is also the setting: the Reagan era 1980s. Without a doubt, we are in a cultural moment where the nostalgia of the 1980s is hitting peak. From shows set in the time period (The Americans, Stranger Things) to revisiting the era (Fuller House), we love us some Reagan era. Except Remender is quick to show us and remind us that that era maybe wasn’t so great. His disaffected look back serves as an excellent reminder that history always has two sides and stories, even when one of them doesn’t get told often.

All in all, Deadly Class is worth investing in. While at times it feels very formulaic, Remender knows how to tell great stories. The mash-up setting of deadly killers, high school, and the 1980s gives the book a much better mosaic to tell the story on and elevates it past what all the individual pieces might be alone.

The art style of Wes Craig (artist) and Lee Loughridge (colorist) also help to set the tone; their work in making the style of the underground scene of the 1980s work on comic pages is really impressive.

The series began in 2014 and the fourth collected trade (Die for Me) is the latest. The three trades before it are definitely worth checking out and you can find them on Amazon. If you are a Comixology Unlimited member, the first trade is available for free.

Why are Board Games Suddenly a Big Deal in a Digital World?