Editor’s Note:  The first mention of each recommended game’s title links to the trailer on Youtube if you want to give them a quick peek!

Clave Nerds, I got an Xbox One this week, but I’m so old and out of the video game scene that I’ve spent the last hour trying to find where I stick the Legend of Zelda cartridge. And this controller has so many buttons that I’m about to tell it where it can stick a cartridge!

So I need some help. What are some great games (current and upcoming) that an OG like me can enjoy on my shiny new Xbox One?

Adkins So my first recommendation is both a solid one and a selfish one. Solid because it is a legitimately great game, and selfish because Jason, Will, and I all have it and you could be our fourth! You need to pick up Blizzard’s Overwatch.

6v6 objective based FPS scraps that are team-reliance heavy.

Morgan Overwatch is definitely a good one. The lore and characters are great and if you have friends online, it’s fun to play.

Clave I’m liking where this is headed. I first played the Diablo 1 beta over a dial-up modem connection in 1994, being draw to it by my playing the old turn-based Warcraft games. So I’m guessing Overwatch is a nice, slow turn-based thinking game, huh?

Adkins Not at all. It is super fast paced and dynamic.

Every time you or an opponent dies, you have the option to switch to another of the 22 characters to augment your team’s strategy. So the faces on the battlefield can be in constant flux.

Clave Cool. I’m in. What you got, Morgan?

Adkins One last pitch for Overwatch:  Blizzard is currently saying that all DLC will be free. Free characters and free maps. A breath of fresh air after the bad taste Destiny put in my mouth.

Clave Blizzard is awesome, no doubt about it. 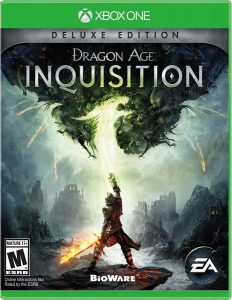 Morgan Well since I know you have Fallout 4, I feel like I would be doing a disservice if I didn’t recommend Dragon Age Inquisition. It’s the last of the series however. I played Inquisition first, and that’s what got me interested to go back and play the rest of the series.

Morgan It’s a great story, has amazing characters. Bioware tried to go really open world with it and I think it’s gorgeous. And you can play it without being totally lost.

Adkins Are the others backwards compatible on the One, Morgan? Do you know off the top of your head if Clave could play them sequentially on his One?

Morgan The older ones are not compatible, and I’m pretty sure they won’t be remastered in the future. If you have a PS3, PC, or Xbox 360 you can play them for cheap.

Clave That’s OK. DA: Inquisition sounds like enough for me. I’m in.

Now, can I take you on two brief asides? (You know I’m going to anyway!)

1. I like games with single player modes. I’m finding in Fallout 4 that I would be happy to simply wander around the wasteland, crafting items, never entering combat. It’s the introvert in me, I guess. I noticed modern games have such a strong multiplayer aspect, but all the yelling in my ear drives me nuts.

2. I LOVE that Morgan mentioned first the story of DA: I. Growing up (literally) on Legend of Zelda, I love that games are getting deeper, more engrossing stories.

Adkins The upcoming game I’m going to pitch to you is single player only, Clave, because I get you.

Clave You feeling me?

Adkins Absolutely. And – even better news – its predecessor is backwards compatible on the One! 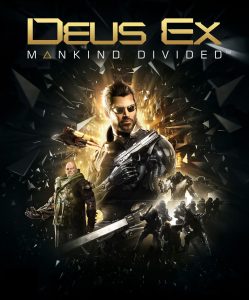 Clave Why can’t mankind come together? Why do video games have to divide us?

Adkins I think you’ll dig this one, man. Its a cyberpunk RPG. You play Adam Jensen, a guy who has all kinds of wicked cool cybernetic augmentations that you can upgrade as you level.

Clave Cool. Kinda like the video game version of the Shadowrun RPG?  I’d like that, I bet.

The game allows you to level and play Jensen as a stealthy, non-lethal dude or a tanky, kill-all-the-things trigger man. Or a healthy dose of both.

There’s not just one way to move through a level, and some of the stuff I’ve read online about it suggests that the developers have even rethought forced boss fights if you go the stealth route.

Your dialogue choices play a big role in what unfolds, as well.

I can’t wait for this one. Drops August 23 of this year!

Clave Cool. I loved the old Knights of the Republic RPG, so a cyberpunk that even remotely resembled that would be up my alley.

Morgan, you have anything you are looking forward to? Besides your whole list, of course! 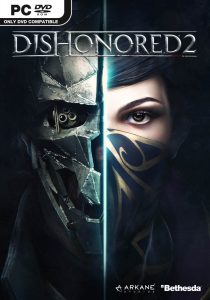 Morgan Well, it’s really hard to think about upcoming awesome single player heavy story games for Xbox One. PS4 gets them all the time now exclusively. But I remember a game coming out later on this year that I really enjoy, is coming to Xbox one as well. Dishonored 2.

The original Dishonored is also compatible with Xbox One.

Adkins I really dug Dishonored. Tell him a bit about what he can expect from a gameplay and setting standpoint.

Morgan It’s s great RPG with a great story and it’s in first person perspective. Beautiful graphics, and you get to play really cool characters.

This game you can choose between two characters to play. A new one, or the protagonist from the original game. And you can choose which kind of style you want to play.

Morgan In this game, Empress Emily Kaldwin has been dethroned and is seeking revenge. She becomes an assassin like her father, who was the protagonist from the first game. You then can play to help her get back the throne and progress into different themed levels.

Let’s review…
1. Overwatch, a game from Blizzard, a company I love.
2. Dragon Age: Inquisition, a fantasy RPG, which are my favorite things in the world.
3. Deus Ex: Mankind Divided, a cyberpunk RPG where dialogue and stealth factor in.
4. And Dishonered 2, a revenge assassin RPG.

You two really love me…

Adkins This feels like plenty to keep you busy for the next year or so.

Clave Who wants to play some Xbox tonight?

Adkins Jason, Will, and I have a date tonight at 9pm EST on Overwatch if you can snatch it up for yourself sometime before then!