Adkins Recently it was announced that Marvel comics would be returning to a Blue Team/Gold Team set up with the X-Men. This was good news to us Nerds, but to none among us more so than Clave and Jason. So I figured we’d arrange a special chat – just for them – so they could dream about/anticipate/predict which mutants will staff each team. Whatcha got, boys?

Jason First, while they are trumpeting the Blue and Gold teams idea far and wide, let’s be clear: there has been more than one X-men team around since, well, New Mutants debut in the mid-80s. So, cranky old man me wants to point out that fact.

Jason Hey, I didn’t kill my whole team in a violence-induced haze. Yet.

Clave This is as much a refresher for me as it is for readers, but take a gander at these original Blue/Gold lineups:

Those are a beauty to behold.

Jason Yep. So at peak X-men, they basically realized the X-Factor original team idea was dead/dying, so they merged and divided the teams. I wonder what kind of draft they had and who got first pick.

Clave Exactly, and the 90s merger of classic Claremont team members with X-Factor team members plays well today. Except it will be some of those classics merged with the All New X-Men that Bendis pulled in from the past.

Gosh, that’s so confusing for someone who doesn’t read comics…

If so, I bet the draft was a doozy.

Jason Adkins, yep. So they had Uncanny X-men and wanted to launch a new title alongside it. So, X-men was born, alongside the Blue and Gold team concept.

But, in terms of creators, I am not sure. Chris Claremont’s run ended not too long after that. To which I vote we give at least a moment of reverential silence.

Jason So, that being said, Blue team was originally the best. Hands down. That is a line-up that is devastating.

Adkins At a glance, they’d get my vote, too.

Jason  It is like they put the weaker parts of X-men and X-Factor on the same team and tried to trick us all by calling it “Gold.”

Clave Then let’s discuss Blue Team first. Look at that original roster and let’s note how many of those X-Men are “off the board” for next year’s relaunch.

Jason So, Blue team rundown: Cyclops (dead, except for younger version pulled from the past.) Wolverine (Laura – X-23 – is Wolverine. Old Man Logan is from another dimension and shouldn’t be treated like he is “real” Logan).

Psylocke is still around, mainly riding the tidal wave of awesome that was Rick Remender’s X-Force run.

Clave Beast is a villain in practice. Rogue is Avengers (I think). And who cares about Gambit.

So knowing that, who do we guess is the modern Blue Team?

Jason Agreed on all three.

If I was in charge, this is dramatic shake-up time. First, you finally, for real, graduate up some New Mutants.

Of the old school New Mutants, who should be playing varsity ball now?

Then I’ll correct your Blue Team with my Blue Team.

Jason So, New Mutants that I think should be in the mix: Danielle Moonstar, Cannonball, Magik, Magma and Warlock.

And I’d split them this way:

That is your starting point.

What I would NOT do is take all the pretenders from the past that Bendis has yanked forward and just put them on the team.

Clave Yet that is exactly what Marvel will do.

Jason Well, they are wrong Clave. This is a time to change the dynamic. Put those kids in school. Give them some good teachers. But, in the meantime, there is real super heroing to be done by real superheroes

Adkins My problem with plugging the young’uns in is that they’ll be treated essentially like their adult counterparts, and I don’t think that is a) wise when it comes to functionality or b) fair to the mutants who’ve got so much more training and talent.

Jason And it is lazy storytelling.

Adkins What do you do with them now, though? Are they the NEW New Mutants?

Jason No. We know there is going to be a Generation X book. Put them in there with some solid teachers. Like Old Man Logan.

Here is who I would put on my blue: Danielle, Magma, Warlock, Storm, Colossus, Nightcrawler, Rogue.

Storm is the leader.

Clave That’s a good Blue Team. I wouldn’t argue with that, other than it’s a little New Mutants heavy, which probably wouldn’t sell well in the opinion of the marketing department. Maybe that’s why you and I are besties.

Jason Gold Team: Cannonball, Magik, Shadowcat, Psylocke, Laura (They are going to put her on either team, like it or not), Archangel and a to-be-determined new X-men tank like character.

Nominations on the tank? Give me a deep cut from old Generation X books, Clave.

Jason Could we see the return of….Captain Britain?!?!

Clave Regardless, these will be the first X-Men comics I’ve bought in a while. I’ve taken the frequent relaunches of the past few years as an opportunity to STOP reading. If Marvel gets back to the basics, plus adds in great new characters like Laura Kinney, then it’s a win for me and I’m back in. 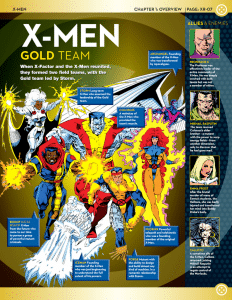 Jason  Who leads your Blue team?

I do like the Cuckoos being on there though. Way more than I like the idea of Emma Frost returning.

Clave No one. It’s a Millennial team-based leadership model where each member expects stock equity in their first 3 months of service.

Jason Is Starbucks and a stand-up desk company sponsoring your Blue team?

And your Gold team is interesting.  They have already set up Logan and Jean Grey in that set-up they do with him adopting the younger character.

Also, you want to mix up the formula Marvel? Have Logan adopt someone who, I don’t know, stick with me here, isn’t a female. I could rapidly make a case for Logan as the weirdest of the X-men and that is a powerful statement.

Jason I will say, at the end of the day, they are baiting us. This Gold and Blue talk will do exactly what it has for us: draw two old comics guys back into the fold to see what is up with the mutants. I just hope they give us some great stories to enjoy and let some characters actually grow forward.