One of the things that have always been a staple of comics is the ability to ask simple that most potentially epic of questions: “What if…”

For creators, asking “What if…” is an enticing exercise, where you can imagine a world where everything changed and then the lasting repercussions that happened after that. And so the “What if…” premise of Mark Millar (writer) and Steve McNiven (artist) tale Old Man Logan is this: “What if the villains all teamed up and finally won?”

Set 50 years in the future in an alternate universe, Old Man Logan is a mixture of genres. Partially, it is a Western, which Wolverine, the Logan of the title, is in hiding, living in the western United States, which is now known as Hulkland and ruled by the incestous children of the Hulk and his cousin She-Hulk, giving it hints of the horror movies like “Deliverance.”  And to pay his rent, Logan takes a job with the blinded Hawkeye to make a delivery across the country. 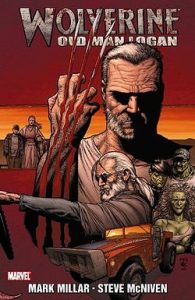 Over the course of the 9 issues, they have various adventures across the dystopian landscape. We learn about the other rulers of other areas, like a new Kingpin, Doctor Doom, and the Red Skull, who has installed himself as President. Seeing the world in its completely broken state is hard to see and as they journey, you wonder if the villains ever regret their takeover.

Old Man Logan is also a story of redemption. When Hawkeye recruits Logan, we learn that Logan doesn’t see himself as a hero anymore and ever since the day of the attack, he has refused to use his claws. Over the course of the story, we get glimpses into the horrible attack and what happened. It is a startling story and one worth checking out.

The climax of the story isn’t the delivery of the package but instead what happens after that, when Logan has to decide to be the Wolverine again or not.

After being a stand alone story in an alternate universe for several years, Marvel used its recent universe merging event to have Old Man Logan become the Wolverine of the current Marvel universe, having adventures in his own solo title and in a title where he is running around as the Professor X type figure for a younger team. While there are many concerns about this approach, in part, the story that surrounds Old Man Logan is what makes him such an interesting character. 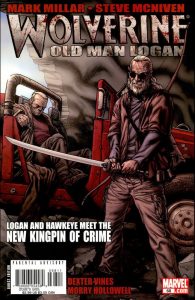 The original story is definitely worth reading, in part because it sounds like they will adapt this story to some degree to be Hugh Jackman’s final (and upcoming) Wolverine film. As all good “What if…” stories do, it takes something we know and care about, in this case, Logan but tweaks it enough to do something different.

The storyline of Old Man Logan would be a great western story as a stand alone, about a gunslinger who has hung them up. But when you add in the superhero element, it takes a new edge, a different type story that is worthy of all the accolades it has received.

If you like a good Wolverine story, you should definitely read this one, which is a solid 9 out of 10 Nerds.