When it was announced that Hugh Jackman’s time as the character of Wolverine from the X-Men film universe was coming to an end, it raised the stakes of the final film. When they announced that James Mangold was returning, that it would be an R rated film and it would potentially be based on the Old Man Logan storyline, I knew we had a chance at an excellent closing film on the character.

So does Logan deliver on the promise?

First, this film is definitely R rated. Some will point to Deadpool as having prepared the way for an R rated film, but where as Deadpool is an R rated comedy with moments of violence, Logan is violent, bloody and dark. From the first opening sequence, we get the sense of the level of violence far past anything in any of the previous Marvel mutant movies. This is truly a dark, anti-hero Wolverine story where his claws are used to deadly, substantial effects. There are some who will think it is too much, but as a long time Wolverine fan, I will respectfully disagree.

Second, this movie isn’t Old Man Logan. It does project some of the tropes of the Old Man Logan story, it is not that story. If I had to put the other influences involved in this story, it would include the Australian Outback era X-Men, complete with Donald Pierce as one of the bad guys, the Frank Miller and Chris Claremont Wolverine mini-series and the always present dystopian vibe that cannot be escaped from modern pop culture. 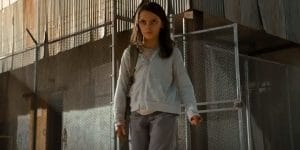 Third, the introduction of Laura, X-23, into the movie canon is brilliant. If you don’t know that story, Laura is the female character that is cloned from Wolverine’s DNA and currently stars in the comics as All New Wolverine.

Her presence in this movie is amazing and they played up all the key elements of her story, mashing it up a little bit with first mutant in 20 years motif. The things that stood out with her was the incredible screen presence that Dafne Keen manages for much of the movie without speaking a word. (Note: whoever is casting the inevitable Lazarus television show based on Rucka’s comic: I believe if you can start shooting in the next 2 years, you have your early Forever.) 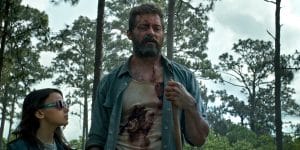 Fourth, this film brings about both closure and sets up some next steps. Up until now, you won’t have been spoiled on this movie but here is your Spoiler Alert. At the end of this film, we have a dead Charles Xavier.

His presence in this film was surprise to me and they did much with him; simply put, what happens if the brain of one of the most powerful men in the world is deteriorating? There are strong hints that Xavier is responsible for many deaths at the “Westchester Incident” that is referenced a few times and occurs in the past of this story.

Wolverine is also dead; the idea is that his aging body likely could no longer keep fighting off the effects of having the foreign adamantium inside his body; he is weaker through the whole film, yet still strong enough when called upon. But the film is not without hope, as Laura is reunited with the rest of the escaped experiments, setting the stage for a new child based team movie; it would have to be a radical departure from what is sounds like is in the works for New Mutants and the next Deadpool film.

Movie studios should learn from Logan. They heard the intention of their star, who has played Logan well in many films over their last nearly 2 decades. And because they did, they were able to bring a fitting close to the actor, the character and the story, while at the same time launching something new and different potentially.

That is a magnificent work and makes Logan a 9 out of 10 Nerds, with the caveat that this is in no way a child’s superhero story.

Layla Miller Knows Stuff: Why a Little Known Mutant is One of Marvel’s Greatest Heroes