Layla Miller Knows Stuff: Why a Little Known Mutant is One of Marvel’s Greatest Heroes

No, don’t be misled by that ‘ah, shucks’ introduction, because Layla Miller is a powerful mutant. “I know stuff” is Layla Miller’s way of saying she can anticipate the future, meaning she may be one of the most powerful mutants in the Marvel Universe.

She was introduced in the House of M #4 (2005) crossover with the following marketing tagline: “The fate of the world rests on the shoulders of one young girl.” “This newest of mutants,” Marvel continued, “was about to become the most important person in the Marvel Universe.”

It didn’t happen that way, as we all know that Marvel marketing is prone to hyperbole and hysterics. Instead, Layla Miller (codename: Butterfly) was almost forgotten, except for the pages of X-Factor.

Layla Miller Knows Stuff: Why She is One of Marvel’s Greatest Heroes

The writer of X-Factor, Peter David, picked the character up and is responsible for wonderfully fleshing out Layla Miller. It was in the pages of X-Factor that Layla was a X-Factor Investigations team member, helping Multiple Man, Monet, Siryn, Wolfsbane, and others solve mutant mysteries.

But in the roughly decade after her introduction, exactly how her powers work has been a mystery. What does “I know stuff” even mean? Well, as is true with most comics, it means whatever the particular narrative needs it to mean, so let’s just sum up.

Layla Miller’s power is an uncanny grasp of the different variations that determine the future. Her power is not physical strength; it is in the stuff she knows. “It’s kind what what I do,” she says. “I have a sense of what’s to come…of how things might turn out…and should turn out. And if it’s not going the way it should, I…”

“Flap your wings?” asks another mutant, referring to the Butterfly Effect, a term coined by mathematician Edward Lorenz (1917-2008), but popularized by Jeff Goldblum in Jurassic Park.

“Right,” says Layla Miller, “I do one little thing on one end that makes things turn out the way they should on the other end.”

Wow, knowing what is to come, then being able make adjustments to change the future? That sounds powerful indeed! But not of all the characters in the Marvel Universe appreciate Layla’s power.

Quicksilver just had his powers restored by Terrigen Crystals and scoffs at Layla Miller: “And you, Layla,” he replies, “for all your talk, remain…Powerless.”

But she corrects him: “Actually, I have the greatest power of all. Knowledge.” 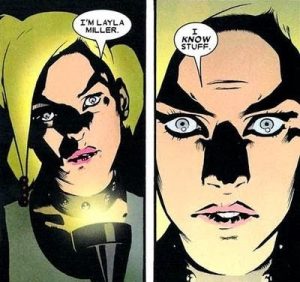 “Knowledge is power,” was a motto coined by the great philosopher Sir Francis Bacon. Before his famous phrase degenerated into a tired cliché, Sir Bacon was known as a tireless champion of the experimental method. His writings ushered in a new era of scientific progress in the seventeenth century. (The connection of Layla Miller to Sir Francis Bacon is examined brilliantly by George A. Dunn, a contributor to X-Men and Philosophy.)

So how does Layla Miller choose to use all this power–this knowledge–that she has? Well, fully in the service of others, that’s how. Layla Miller has the power to to use her knowledge to change her future. She could “rewrite” stuff for the benefit of her own self-interest at the expense of others, but unlike Ayn Rand, she realizes she has no right to. Instead, Layla is willing to sacrifice herself for the benefit of others.

Layla Miller using her knowledge in the service of others is what makes her a hero, not her mutant powers. Layla Miller has all the power in the world, yet she uses it humbly and meekly for the benefit of others.

There is so much more to Layla Miller and comics are complicated, but in closing, this reminds me of a recent report from the Bill and Melinda Gates foundation. This year the foundation report was in the form of a letter sent to Warren Buffett, another billionaire who has pledged to give away his fortune to charity. 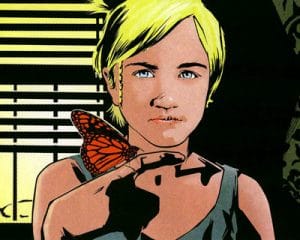 You can read the full report here, but it highlights to tremendous progress that has been made to tackle global poverty. While gains certainly still need to be made, Bill and Melinda Gates shared that 122 million children’s lives have been saved since 1990, a heart-warming figure.

What is interesting is that Gates shares how the lives were saved–through knowledge. Reducing childhood mortality is the result of advances in nutrition, education, access to contraceptives, gender equity, economic growth, and vaccines. My point, of course, is that knowledge really is power. In this instance it is literally the power to save the lives of children.

Layla Miller is right when she says that she has the greatest power of all. And the fact that she uses it for the benefit of others is what makes Layla Miller a hero.

Xorn, Nerdsplained: Making Sense of One of the Most Confusing Characters in Comics